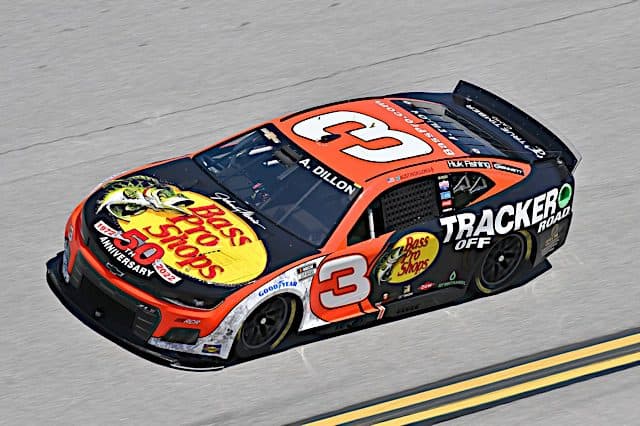 TALLADEGA, Ala. – Much of Sunday’s (April 24) NASCAR Cup Series race at Talladega Superspeedway was “nerve-wracking” for Austin Dillon.

It’s easy to understand that given the circumstances.

Early on in the GEICO 500, Dillon’s teammate Tyler Reddick became the first car to drop out of the race due to a problem with a broken timing belt in the engine of his No. 8 Chevrolet.

Then, on lap 57, the same problem occurred on Kaulig Racing’s No. 16 Chevrolet driven by Daniel Hemric.

Why was that a potential problem for Dillon?

First, Kaulig Racing is an associate team to Richard Childress Racing. ECR builds engines for both organizations so each time a problem struck an ECR engine, that increased the odds it would happen to Dillon.

“I was very nervous,” Dillon said on pit road after he finished second in the race. “It kind of messes with you there.”

Second, at the time that Hemric’s engine gave out, he was running right in front of Dillon in turns 3 and 4.

Hemric drifted back, bounced off the nose of Dillon’s No. 3 car and spun onto the apron before collecting the cars of Chase Briscoe and Chris Buescher.

A big hit at Talladega. Here's what happened: https://t.co/oR4SUwoJX2 pic.twitter.com/elGOQjaIGJ

“You know, when the engine blows and you have no warning, it’s not a good place [to be] here at Talladega when there’s 30 other cars behind you to be thinking about that,” said Dillon. “So for a long time, I was kind of monitoring who was out the back and trying to keep a gap in case something happened then.

“At the end, you just throw caution to the wind.”

That happened on the final lap as the field began making its way through the tri-oval.

Before the chaos began, Dillon was fourth in line on the inside behind Erik Jones, Kyle Larson and Ross Chastain. To Dillon’s outside were Kurt Busch and Martin Truex Jr.

Dillon said what transpired was “a lot in a short amount of time.”

But what he did in the closing moments was based on what he’d seen Saturday (April 24) as a TV analyst for the Xfinity Series race.

“I don’t know what happened up front, really … the way the sun was just, for some reason cars kind of washed to the middle lane,” Dillon said. “And I saw that yesterday in the booth that the bottom prevailed if you could hold your car down there.

“I don’t know if their runs were too big up front and they just got tight. But I had clean air on my nose, gotten the bottom, (Chastain) was still there, caught him with a pretty good head of steam, was able to give him two shots, and it kind of shot him out there. And he was able to race for the win. And we were able to come up second.”

See also
Tyler Reddick And The Burden Of Losing At Bristol

It was the second consecutive week that RCR has finished second after drama on the last lap. Reddick had that distinction last weekend on Bristol dirt.

RCR now has six top fives through 10 races, one shy of its mark of seven for 2020 and two more than its 2020 total. The two-car team has placed second three times now.

Dillon himself has three of those top fives, after finishing second at Auto Club Speedway and third at Martinsville Speedway.

“This should be our third second-place finish this year if you count Martinsville and me spinning the tires (on the final restart), but it’s only two,” Dillon said. “But really proud of all of our team and the Next Gen car. It’s different, man, you just have to adapt as you go and stay focused, stay positive.

“We’re just knocking on the door.”

Dillon is feeling more heat since Reddick got there.

Sure he is. Reddick has made both teams get better. I’m surprised he hasn’t gotten that first win yet. He’s doing very well.

Both Dillon and Reddick are going to need a win to get in I think.