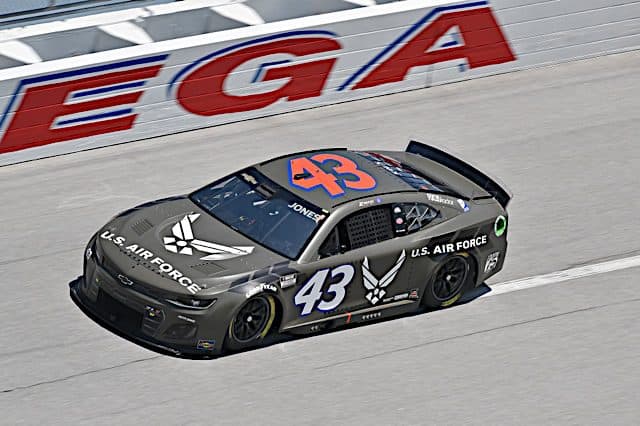 TALLADEGA, Ala. – For a few fleeting moments, it looked like Erik Jones was going to do it.

Jones had the Petty GMS Motorsports No. 43 Chevy out front in the final turn on the last lap of Sunday’s (April 24) NASCAR Cup Series race at Talladega Superspeedway.

There was just one problem: the multiple car lengths that separated him from Kyle Larson in second place. Jones was too far out in front. He was a sitting duck. Moments later, after a multi-car wreck triggered by Ross Chastain‘s contact with Larson, Jones crossed the finish line in sixth.

“I mean, just the last lap, right?” Jones said. “It’s typical here. Been close here so many times, in this race and the fall race. U.S. Air Force Chevy had good speed, felt good to be up front.

“Coming there that last lap, we were single file. I felt pretty good about it. They kind of doubled up behind us. That top lane was getting some momentum. Looking back, I wish I would have stayed at the bottom and let the No. 1 push me. I didn’t realize they were coming with that much speed.”

He didn’t, and it cost him. Jones also noted that putting up a solid defense of Larson “kind of gives the door to (eventual race winner Chastain). …

For Jones, the choices were made and he must now focus on the positives. It’s still his third top-10 finish through 10 races this season. Last year, he didn’t earn his third top 10 until the 27th race of the year on the Indianapolis Motor Speedway road course.

Jones has also led 46 laps already, compared to nine in his first season with the team.

“Happy to run up front, lead laps,” Jones said. “Would really love to get the No. 43 in Victory Lane. I thought today might be the day. All day long, we were fast and had speed. Especially being up front there at the end, the last 10, I knew we had a shot, but just couldn’t quite close it out.”