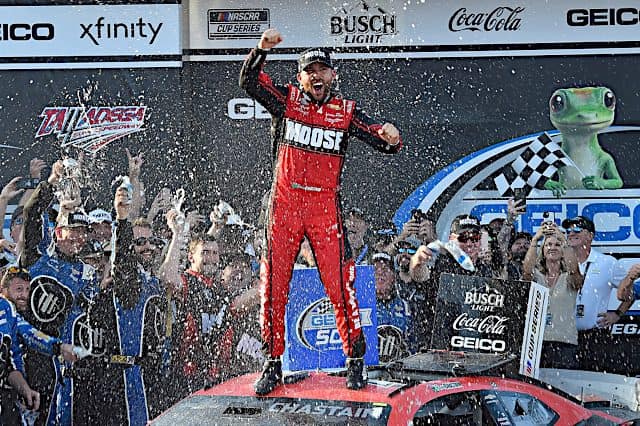 What Happened in the GEICO 500?

For the second week in a row, the NASCAR Cup Series winner led only one lap of the race. Ross Chastain held his line off turn 4 as chaos erupted around him, slipping through to take the win at Talladega Superspeedway.  The victory is his second career win in the Cup Series; Chastain also became only the second driver to win more than once this season.

How Did It Happen?

Chastain found himself within the top 10 for the majority of stage three.  After the final round of green-flag pit stops with about 30 laps to go, Chastain was running fourth, with Larson, Erik Jones and William Byron ahead of him.

The top lane began to form with 10 laps to go, allowing Jones to work his way around Larson to take the lead once again.  Jones ended up leading 25 laps on the day.  Larson remained within striking distance, riding comfortably in second while Chastain had gotten around Byron after Denny Hamlin had to pit for fuel.

As the field came off turn 4 for the final time, Jones had a huge gap between himself and Larson.  Chastain gave Larson a big push, to which Larson attempted to get to the outside of Jones, but in doing so doored Kurt Busch into the wall. Busch then slid down and took out his 23XI Racing teammate Bubba Wallace.  Jones attempted to block Larson, but Larson still got to his outside.  However, neither had momentum and Chastain slipped underneath both of them to steal the win.

WOW! @RossChastain gets to the lead late to win at @TALLADEGA! pic.twitter.com/Db5rGpN1Ti

Petty GMS Motorsports has nothing to hang its head about after its performance this weekend.

Sure, it may have lost the race within 500 feet of the start/finish line, but both cars showed well on track.

As previously mentioned, Jones led 25 laps and still finished a respectable sixth, while his teammate, Ty Dillon, showed speed early in the race, running around the top 10 before getting taken out in the Big One during stage two.

It’s not the result either driver wanted, but there were certainly some eyes on them throughout the race.

The two teammates may not be at the top of everyone’s list of potential winners this season, but they have shown with this Next Gen car that contending is possible if they find themselves in the right position. Jones already has three top-five finishes, two top-five starts and sits just 12 points behind the playoff cutline.

Tyler Reddick went from absolute heartbreak a week ago at Bristol Motor Speedway to full-on disappointment.

Reddick was looking for redemption this week after coming mere feet from winning the Food City Dirt Race at Bristol.  Richard Childress Racing has prepared some fast cars for him, and it’s no longer a matter of if he’s going to win, it’s where and when.

It certainly wasn’t the GEICO 500, though.

Reddick qualified 10th, but following a round of green flag pit stops, as Chastain and Brad Keselowski were serving speeding penalties for going too fast on pit road, Reddick remained there with his crew looking under the hood of his No. 8 machine.

It turned out Reddick broke a timing belt on lap 31 and was done for the race.  He was credited with finishing 39th, dead last.

What Did This Race Prove?

Unlike the Daytona 500, the very first points race, teams had an idea of how the Next Gen car would react in the draft.

Fortunately, no cars went airborne or upside down, but there were still some hard crashes.  There was still a Big One, so it was still your typical superspeedway race.

While bump drafting is still an issue, it was not enough of an issue to cause an above average number of wrecks.  Like the Daytona 500, drivers pushed aggressively, but it seemed that the Fords could push the best without getting anyone loose.

The most prevalent example of aggressive pushing that could have gone wrong was toward the end of the race.  While Jones and Larson were battling for the lead, they had two Chevrolets – Byron and Chastain – giving occasional, yet still aggressive, pushes to try to get out front.

With Jones specifically, every time Byron pushed him into the corner, his No. 43 would constantly fishtail and put every fan watching on the edge of their seats.  Fortunately, Jones wheeled the car out of it every time and avoided wrecking himself or the field.

So it’s just the Chevrolets and their pointed nose that can’t push then, right?

Immediately after a restart in stage two, the outside lane stacked up, resulting in Wallace, the stage one winner pushing Logano too hard into turn 1 and turning him into the outside wall, igniting the Big One that collected several contenders, including early race leader Daniel Suarez.

So maybe it’s pushing in the corners?

It’s still too early to tell with this new car.  There’s only been two (well, I guess three with Atlanta) superspeedway races so far with the Next Gen, although it’s looking like pushing in the corners may remain the issue like it has been in previous years.

In the Daytona 500, both Harrison Burton’s flip and Ricky Stenhouse Jr.’s crashes were a result of pushing aggressively in the corner, albeit exiting the corner instead of entering.  At Talladega, crashes and loose cars from pushing came in the entrance of the corners.

Maybe pushing in the corners isn’t the best idea, but at the same time, if you’re looking for a big push at Daytona in August, I’d recommend talking to a Ford driver before the race.

Beard Motorsports got itself the $5 Biggie Bag.

The team arrived at the track in a bright blue and red No. 62, much different than its typical black and white with blue trim.  Wendy’s came on board as the team’s sponsor for the race, the first time they’d done a major NASCAR sponsorship in over 20 years.  The scheme is eye-grabbing and it really made driver Noah Gragson stand out in the Alabama sun during the race.

Check out that wrap. 🤩 Our No. 62 @Wendys $5 Biggie Bag Chevy is one step closer to Talladega. @NoahGragson | #NASCAR | #GEICO500 pic.twitter.com/zydPbcj6mS

The last time the Cup Series was at Talladega in October, the race was shortened due to rain, resulting in Wallace gaining a historic first career win in the Cup Series.  So in that aspect, this race might be better than October because it went the full distance and also wasn’t extended to several overtimes.

However, most of the third stage consisted of single-file racing, something that fans generally don’t like to see during a superspeedway event. There were also some hard hits within the crashes we saw in the race.

No fan wants to see entertainment be put ahead of safety, but they also want to see racing action as well.  This race had the catch-22 – boring racing for most of the last stage but those hard-hitting crashes reset the field for more competitive action.

Both races had a fan favorite win the race (or polarizing figure, depending on your viewpoint of those two) and an exciting last lap at a superspeedway race always helps make up for some of the event, no matter how boring it was.

But there’s still a lot to learn about superspeedway racing in the Next Gen car.

Time to battle the Monster.

The NASCAR Cup Series takes to the concrete of the newly-renamed Dover Motor Speedway for its lone race of the season in Delaware.  Cup practice begins at 10:30 a.m. ET on Saturday, April 30, immediately followed by qualifying at 11 a.m. ET.  The DuraMAX Drydene 400 will be televised on FOX Sports 1 on Sunday, May 1 at 3 p.m. ET.

I might be remembering wrong, but wasn’t last fall’s Dega race bumped back to Monday as well?

yeah, it got totally washed out on Sunday.

Then this one is better based off of that alone.

I was really hoping the 43 would win.

It seemed like neither Jones nor Larson were willing to try blocking/controlling both lanes like we’ve seen drivers in the lead attempt to do the last several years. I kept waiting for them to do it but they didn’t. I’m not saying I wanted to see that but I was surprised they didn’t try.

Otherwise, as always a crapshoot race with lots of attrition where anyone could find their way to the front or fall to back equally as quick. Chastain was the beneficiary this time and even he admitted that he won by “doing nothing” but just staying in line.

When I read Chastain’s comments I was reminded of what Buddy Baker told Ron Bouchard he should do to win at Talladega. Be third coming to the checkers and stay in line until the first two spread out and then hug the line and get a run. It worked for Ron and he got his only win. The best part was DW thought he had won and never saw Ron until he flashed beside him.

Check it out here:

Great ending to a race but, damn, I couldn’t SEE much of anything because of the terrible visuals. Any details of the actual cars were so blurry they just looked like white blobs on wheels.

Those videos aren’t hi-res and are similar to my VCR recordings. You can’t go full screen since it makes it worse. We are spoiled by the pictures but not the action on the tracks.

The definition of insanity is doing the same thing over and over and expecting a different result. Yet every single plate race those at the front perform ridiculous blocks, wreck and lose.

Not enough of them or enough cars involved. Too many cars finished the event.

Someone didn’t get the sarcasm.