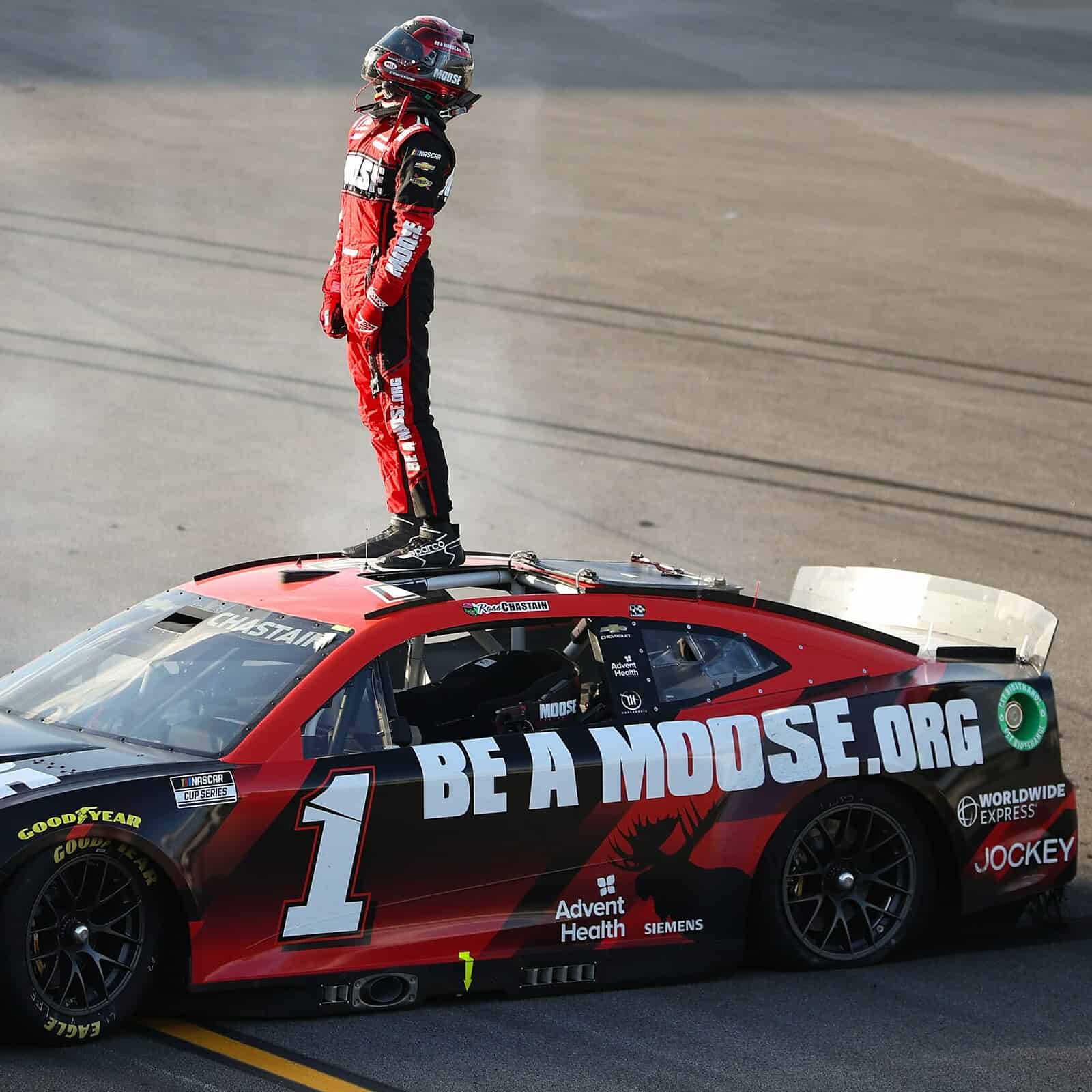 There’s an eight-letter word that isn’t uttered, at least not often, at Trackhouse Racing Team’s headquarters in Concord, North Carolina.

It’s not a vulgarity you wouldn’t say in front of your mother.

But it is a word that will all have sorts of “implications” tied to it once the NASCAR reaches a certain point in its season.

And thanks to Ross Chastain‘s dramatic wins at Circuit of the Americas and Talladega Superspeedway, it’s a word that will have implications for Trackhouse in just its second year of existence.

“I’m being honest when I say that ‘playoffs’ isn’t a word that’s uttered in our building at all,” Marks said Sunday (April 24) after Chastain’s second career victory. “We still have to go to a lot of tracks with this racecar that we’ve never been to before. We still have a lot to learn. We’re committed to the process of learning this car, figuring out the right approach to this car.

“I’m being totally honest with you. We don’t talk about that at all because it’s so new, everything is just so new. We’re just trying to do a good job every day.”

Just how new is everything?

While Trackhouse Racing is in year two of its project, so much of its makeup is based on what came before.

Sure, there’s the Next Gen car.

But the majority of Trackhouse’s employees — about 105-110 of 120 and including Chastain — made the transition to the new regime when Marks and co-owner Pitbull bought out Chip Ganassi Racing. Trackhouse also moved into Ganassi’s old campus.

“It was important for me to keep a lot of those people because they know that building, they know workflow in that building, they’re used to working together,” Marks said after Chastain’s COTA win in March. “It’s a pretty tall mountain to climb if you put 120 people together that have never worked together and say, ‘Go do this.'”

Together, those 120 employees have delivered two wins in the last five races.

Trackhouse’s two wins through 46 overall races is more than 23XI Racing (one win), the other high-profile organization that debuted in 2021, and Kaulig Racing (one), which made its full-time debut this season but earned its first Cup win last year with AJ Allmendinger on the Indianapolis Motor Speedway road course.

Trackhouse has now matched the total number of wins Joe Gibbs Racing earned its first three seasons. If it wins again in 2022, it would tie the mark Hendrick Motorsports set in its first two seasons when it claimed three wins with Geoffrey Bodine in 1984.

On Sunday, Marks said it’s “easy” to want to compare Trackhouse’s success to end of the Ganassi era.

“That’s pretty low-hanging fruit,” Marks continued. “In a time of transition, you’re trying to measure yourself against what was before.

“But honestly, I don’t really think about it. I have a tremendous amount of respect for Chip Ganassi. I mean, I’ve raced for him for a number of years. I’ve been inspired by watching him and his teams race. Things are just so different. I mean, we’ve kept a lot of people, but it’s an entirely new culture. The building looks different. We have this new car, new schedule. […]

“But Trackhouse just can’t compare to Chip Ganassi because what we’re doing is just so different.”

Ganassi is racing royalty. Even if he never reached top-tier status in NASCAR, he was an established, respected brand.

The Trackhouse brand is still being established, but Marks has been consistent in describing his organization as a “disruptor” in the NASCAR space.

“Trackhouse is — it’s an investment in the people,” Marks said at COTA. “The pitch was, let’s build a great team together, let’s do all of this together. That was the inside of the building pitch. The outside of the building pitch is this sport is ready for challengers. It’s ready for disruptors. It’s ready for people to come in and challenge the status quo and how we do things, have some fun, look good, try to be fast, win races, have a good time doing it.

“I just have always been authentic about my mission. I just take a lot of pride in seeing everybody’s smiles and happiness today. The pitch was, ‘Let’s just do something great together.'”

Marks’ pitch is working so far. A few hours before Sunday’s GEICO 500, Trackhouse held a press conference in the Talladega media center to announce a new two-year sponsorship deal with freight and logistics company Worldwide Express. The deal has the company on Chastain’s car for 17 races through 2023 and on Daniel Suarez‘ No. 99 car in four more.

Marks said Trackhouse’s sponsor inventory is full for this year and likely 2023.

“We’ve got a lot of momentum right now,” Marks said. “What we’re doing is resonating with a lot of people.

“[…]This is a sport where companies can come in and they can build brand awareness, they can grow their business. We’re just trying to position ourselves at Trackhouse as the most viable place for companies to come and do that.”

“A lot of responsibility comes with that, too. Like I said earlier, it’s not going to be like this forever, right? There’s going to be a trough that we go through. There’s going to be times when — and it can happen at any point — other teams are strong, other OEMs are strong. We have to build a strong foundation so when those headwinds come, we can navigate them.

2022 is Daniel McFadin’s ninth year covering NASCAR, with six years spent at NBC Sports. This is his second year writing columns for Frontstretch. His columns won third place in the National Motorsports Press Association awards for 2021. His work can also be found at SpeedSport.com and FanBuzz.com. And you can hear more from him on his podcast.

I wonder what they’re asking for sponsorship compared to Hendrick & Gibbs?