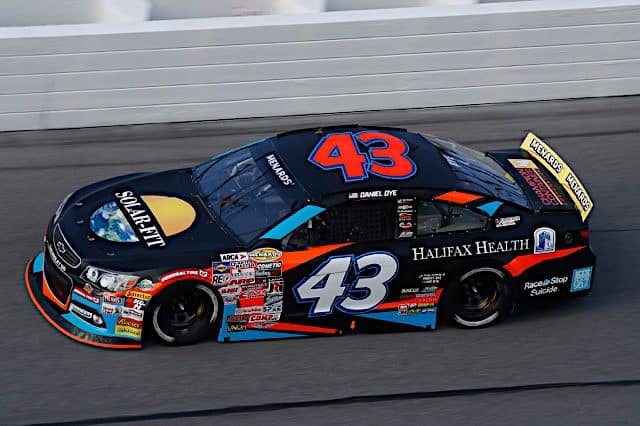 ARCA cited its rulebook section 12-8.1.E.2, a behavioral penalty, as the reasoning for his suspension.

Dye was arrested April 26 in Volusia County, Fla., after allegedly punching a fellow student at Father Lopez Catholic High School in Daytona Beach, Fla., in the groin. You can read more about the allegations here.

Dye has not commented publicly on the arrest. According to FOX Sports’ Bob Pockrass, Dye’s attorney, Aaron Delgado, said that Dye will be “completely exonerated.”

Following the suspension, GMS tweeted that it was “aware of the current situation surrounding Daniel Dye” and that the family was “cooperating with local law enforcement. No further comment will be made on the subject until more information becomes available.”

Dye was set to compete full time in the ARCA Menards Series in 2022 in the No. 43. Following last weekend’s race at Talladega Superspeedway, he was second in points, one behind leader Rajah Caruth. The next main-series ARCA race is scheduled for May 14 at Kansas Speedway.

Punching or groping of the groin is not allowed. That was one of Brian Frances pet projects.

Nascar is trying to present these rich kid / connected drivers” as the future of auto racing. I’d like to see a list of them in xfinity and ARCA. Top of the list is Baby Gibbs. Sickening!

On second thought it was probably Tim Richmond

Can’t forget Custer. Terrible since he’s moved up to Cup, but his dad is the president of SHR

There’s nothing wrong with rich kids and/or connected drivers, the problem is how they’re raised. Michael Andretti’s been a jerk, but so was his father. I haven’t seen Cindric display any thing that could be called bad behavior, but neither his father nor Roger Penske would put up with it. Gibbs behaves the way he does because his parents and grandfather condone it. Maybe Gibbs will grow up someday, or maybe he’ll always be a spoiled brat, like Kyle Busch.

As far as Dye, I don’t know anything about him. I haven’t heard to many details about what he did, but it doesn’t sound much different from what I remember from high school. The other kid was injured, and he’ll have to face the consequences of that, but he’s still just an 18 year old kid, and how many 18 year old’s haven’t made dumb mistakes? The question is will he learn from it? Whatever the outcome, he’s quite possibly ended what seemed to be a promising career in racing.