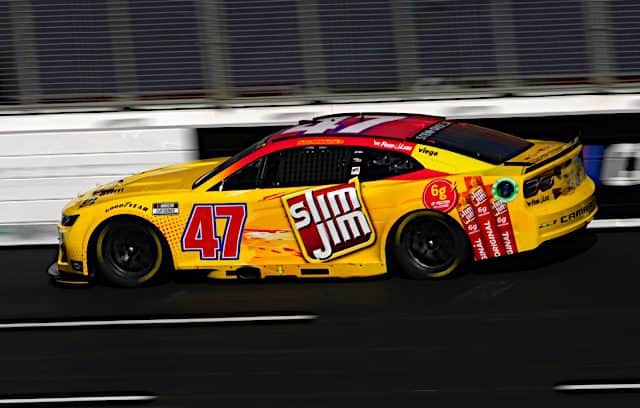 JTG Daugherty Racing has had a tough 2022 season so far. Over the offseason, the team went through some changes including consolidating it program from a two to one-car operation. While sometimes that could mean an uptick in performance for a team given the ability to focus on one race team, for JTG Daugherty that has yet to be the case in 2022.

Through 10 races Ricky Stenhouse Jr. sits 31st in points. Through 10 races in 2021, Stenhouse was 15th in the standings. That’s a 16-position drop from this time last year. They also have only one top-10 finish this season. A lot has changed in 2022, and it’s still early, but is it time for a change at JTG Daugherty Racing? Luken Glover and Mark Kristl debate.

Don’t Jump the Gun Just Yet

Yes, I know – it looks bad… really, really bad. Stenhouse is pacing to have career-lows in average start (23.8), average finish (26.9), and points position. He also has four DNFs, over half of his 2021 total of six. This is his third season at JTG Daugherty Racing, who opted to go with him over Ryan Preece. Is it time to panic? Not quite.

Let’s venture off of the paper for a moment. Stenhouse led 16 laps in the Daytona 500 and arguably had the best car at the end. That is until he got turned by Brad Keselowski in the closing laps. Auto Club Speedway has been his most complete race thus far. He ran in the top 10 for a large chunk of the race, emerging late to score his lone top 10 so far.

Three weeks later, Stenhouse’s No. 47 was pacing the field at Atlanta Motor Speedway, where he led 22 laps. However, he blew a tire from the lead and was forced to retire from the race due to the damage.

At the Bristol Motor Speedway dirt race, Stenhouse was a legitimate contender but was involved in multiple accidents that ruined his race. And before he really even had a chance to make some noise at Talladega Superspeedway, where you always have to watch him, he got taken out in a pileup that started ahead of him on a restart.

Lots of bad luck, and a lot of it not being of his own doing. Yes, I am aware of the monikers he’s been giving over the past few seasons, as well as his tendency to be overaggressive at times. But if you dig deeper, this is a driver with a lot of talent. If not, he would not have two NASCAR Xfinity Series titles under his belt. Despite the reaction that superspeedway wins get, Stenhouse has two of them and has established himself as a consistent contender each time we hit Daytona or Talladega.

Part of the problem is also trying to figure out the Next Gen car. In a lot of ways, Stenhouse’s style fits the Next Gen car, and in some ways, it does not. But he’s not the only one with struggles. A couple of weeks ago, the main driver he found himself battling was Denny Hamlin, who won the week prior at Richmond Raceway. Kurt Busch now has had three races in the past five where he’s earned five points or less. A lot of teams will be trying to get a grip on this new car for a long time.

Chevrolet does seem to have the advantage in many ways currently. JTG Daugherty has a technical alliance with Hendrick Motorsports, something that could prove valuable as this season progresses.

What is the wild card in all of this? As long as Stenhouse can get back in the top 30 in points, which is very likely, all he needs is a win, barring we get more than 16 winners. As controversial as that has become with the new points system, it is the name of the game right now. Remember Aric Almirola last year? He was 27th in points entering the 22nd race of the season at New Hampshire Motor Speedway and well on his way to missing the playoffs. Instead, he got hot and won the race. Something like that can completely flip the script.

To build off of that, Stenhouse is not immune to having a breakout race. He finished fourth in the second Charlotte Motor Speedway oval race in 2020. Last year, he finished sixth in the inaugural race at Nashville Superspeedway. How about the Next Gen car? Drivers who missed the 2021 playoffs and have come very close to winning are Erik Jones, Daniel Suarez and Austin Dillon to name a few. This car gives Stenhouse the best opportunity to take a one-hit-wonder race and turn it into a win. Oh, and did I forget to mention the fact that the Daytona summer race is still the regular season cutoff race?

If this season continues to be a downward spiral, a change is likely warranted in the offseason. That may look something like a driver change, a crew chief swap, a manufacturer switch, or perhaps rumors that JTG Daugherty will sell its charter. But until that possibly comes, buckle up. – Luken Glover

It’s Time for a Change

JTG Daugherty Racing already made a change this offseason, condensing from two full-time entries to just one. Yet its driver Ricky Stenhouse Jr. is 31st in the points and has only finished inside the top 15 in points just once in his career. It is time for a change.

Since he joined JTG in 2020, Stenhouse overall has four top fives and seven top 10s. Consider this: 18 NASCAR Cup Series drivers last year scored at least eight top 10 finishes. That means in one year, 18 drivers performed better than Stenhouse has in his entire JTG tenure.

The 34-year-old has not found enormous success in Cup. His two wins came at Daytona International Superspeedway and Talladega Superspeedway. With the Next Gen car era underway and several drivers earning their first Cup win this season, Stenhouse’s superspeedway successes may be over.

Of the other courses on the Cup circuit, Stenhouse only has five top fives on short tracks, but he also has finished on the lead lap at those tracks less than half (25 out of 54).

Only at superspeedways and road courses does Stenhouse have finished on the lead lap more than 50%. That is not an encouraging sign for JTG, especially when other drivers in the garage are inching closer to their first career Cup win.

JTG, Live Fast Motorsports, and Wood Brothers Racing are the only Cup teams with one entry. Live Fast is in its second season, less than JTG, so continued growing pains are more acceptable. Wood Bros. has rookie Harrison Burton piloting the No. 21. Burton is only two points ahead of Stenhouse in the points, but he is younger and a rookie.

Is JTG confident Stenhouse can improve? He has not finished inside the top 20 in points since 2018. He has not led more than 10 laps in a race since the second race of the 2020 season.

No, JTG cannot assume Stenhouse will improve. Moreover, this single-car organization has a charter and constant sponsorship. If it moves on from Stenhouse, there are a few good replacement candidates, and this team can then assess the source of its problems.

Brandon Jones turned 25 earlier this year, so he is younger. Jones also has five NASCAR Xfinity Series victories and brings funding. That extra funding may help JTG secure better equipment, personnel, etc. allowing it to move up the echelon of NASCAR ownership. Jones also drives for Toyota, so he lacks a pathway to a Cup ride. JTG could swoop in and sign him.

Noah Gragson has only three more career Xfinity starts than Stenhouse, and his statistics are better than Stenhouse’s Xfinity resume, albeit without a championship compared to Stenhouse’s two titles. Gragson drives part time in Cup, so JTG has seen him wheel a Cup car. Yes, Gragson has two DNFs in his four Cup starts, but like Burton, he will continue to learn as he gains more experience driving a Cup car.

Not all driver-team combinations flourish. Joey Logano moved from Joe Gibbs Racing to Team Penske and has won multiple races and a championship with Penske. Kurt Busch has driven for several different Cup teams and has won at least one Cup race from 2014-2021. After leaving Richard Childress Racing, Kevin Harvick has won a title and finished inside the top 10 in points every year since.

Stenhouse and JTG? It is not working. Even Brad Keselowski, who was penalized 100 points earlier this season, is still four points ahead of Stenhouse. Although it is an admittance that the team will not make the playoffs by moving on from Stenhouse, JTG will not make the playoffs with him. JTG needs to move him to salvage the rest of this season as it hopes to revive its Cup program. – Mark Kristl.

“All he needs is a win.” Sounds simple enough. Except in the entire history of JTD, they’ve had what, one win? That was with AJ, & they fired him. Just don’t see it happening.

Stenhouse had his best season in 2017 and has fallen off a cliff the size of Texas since. He’s been so awful this year that even if he did go out and win Dover or Darlington he’d need to get back into the top 30 in points to qualify for the Playoffs.

Given the fact that JTG-D has been regressing the past several years, you have to wonder if they might call it a day and sell the team & charter to an eager new owner. As for Stenhouse, he will probably join DeBenedetto as an ex-Cup driver after this season.

Article neglects to factor in the 3 engine issues this year. Two engine failures and one loose wire (fixed midway of race).