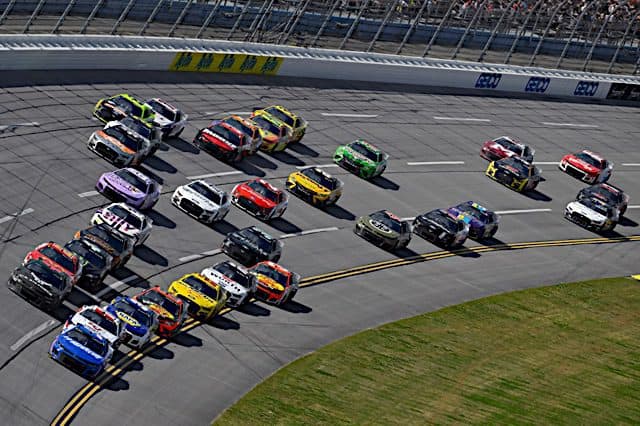 The final stage of the NASCAR Cup Series race at Talladega Superspeedway was caution-free. Does that affect your judgment as to whether it was a good race?

Aaron Bearden: Didn’t affect my opinion a bit. As long as the racing provides entertainment value,  it doesn’t need to live or die by cautions. Talladega provided enough entertainment.

Luken Glover: It really depends on the quality of racing, not the number of cautions. Superspeedways typically generate enough action to where it is an entertaining final stage regardless of yellows. The Talladega race was an overall good race that had a lot of quality for a superspeedway. There were a few multi-car crashes, but none that took out half the field. The side-by-side action wasn’t the greatest of all time, but it wasn’t slacking either. We saw the importance of pitting in sync in the final stage, and the last lap produced the drama that many love about a superspeedway. In the end, we didn’t have only eight to 10 cars crossing the finish line. The problem has been if there are several Big Ones, it is criticized as a wreck fest. If it features no crashes and it is hard to generate multiple lanes, there is immediately a call for change. Talladega featured a good balance of everything.

Mike Neff: No. The decision on whether a race is good or bad is based on the levels of competition. The inability of a second lane to really make a legitimate attack on the lead was what made it just an OK race.

Josh Roller: If the only two cautions are the two stage-ending cautions, the race can still be fantastic. Having the final stage go caution-free doesn’t bother me, but to a casual or uber-casual fan who looks for cautions, they won’t. The race at Talladega was good, and cautions didn’t affect that.

After multiple Cup teams failed pre-race inspection, should NASCAR alter its inspection process for the Next Gen car? Or should it stiffen penalties?

Neff: What? People can’t follow the rules so let’s make it easier to pass inspection? Hell no. The rule book is the rule book; it is black and white. The new car is basically bolted together with minimal alterations available. Stick to the rules or pay the piper.

Bearden: Penalties are expected, especially in these early stages for the Next Gen car. I don’t have any major concerns with the penalty process from what I’ve seen so far.

Roller: I’d love for NASCAR to return to using templates instead of the laser system currently used. But if it gives teams more leeway or loosen penalties, NASCAR needs to prepare for teams to start pushing limits more. They’re in such a box now, and with it being a brand-new car with a brand-new way of construction, there is little room for innovation.

Glover: The argument can be made that teams should receive more leniency considering we are in the rookie year of the Next Gen car. However, mechanics and measurements have been a big part of the sport for years. I wish we had the days where teams could try little tricks with their cars that were within certain parameters. Manufacturer battles to bring the best car are not at the same level they were in the early decades of NASCAR, due in part to the fact that there are only three manufacturers. The point is, if we are going to get the cars to be nearly identical, they shouldn’t loosen the rules. However, the days of innovation and trying to get an advantage over a particular manufacturer need to come back.

Glover: Is it perfect? No. However, it has been an overall solid product. There has been debate about whether the horsepower has been too low. I would like to see more horsepower, but the continuing development of safety has to move with it. Multiple lanes have been able to develop with the car, and it appears cars can take more of a push than the Gen 6 car, though improvements still need to be made. The biggest difference has been the effect of side drafting. Side drafting is still important, but it is not at the same level as the Gen 6 car. Overall, the racing has been good and the superspeedway package has not disappointed.

Neff: We continue to play with fire, and eventually we are going to get burned. Pack racing is an invitation for disaster, and we not only promote it but we also screwed up one of the best tracks in the history of the sport to promote more pack racing. Running flat out with no tire fall-off keeps everyone together and begs for calamity. Please get these cars apart.

Roller: I’ll keep this simple. If the cars stay on the track, drivers feel comfortable and the ability to pass exists, the racing at superspeedways is good. Daytona International Speedway and Talladega put on decent shows, therefore let’s see how Daytona in August goes.

Bearden: I’m not one to ask on this, because I’m not a big fan of these races (that guy, I know). That said, the superspeedway package hasn’t felt too far removed from prior years, which I suppose means it’s been a success. There were drivers concerned about difficulty passing at Talladega and the third lane rarely materialized, so there are things to work on. But the package has been serviceable thus far.

Jeffrey Earnhardt finished second in the NASCAR Xfinity Series race at Talladega. Would he be a contender if Richard Childress Racing fielded him in more Xfinity races?

Bearden: I don’t know. The closest thing we have to go off is the handful of starts he made for Joe Gibbs Racing in 2019, during which he tallied a third-place run at Charlotte Motor Speedway and came home sixth at Atlanta Motor Speedway. Based on that, one would assume he could be a serviceable driver, especially if given a full-season opportunity that he could grow into. But we may never know.

Roller: Jeffrey Earnhardt has shown his true capabilities plenty. At the very least, RCR should be looking to put him back in the No. 3 at the remaining superspeedway races. The attention given to the car and sponsors was worth the effort alone. Add on Earnhardt’s talent and the effort may culminate in victory lane.

Glover: There were flashes of his granddaddy at Talladega, and Earnhardt certainly impressed a lot of people. I would like to see what he could do on an intermediate or short track to prove how competitive he could be. We haven’t gotten a great look at Earnhardt’s talent, as his best shot came in JGR’s No. 18 car in seven races during 2019. Earnhardt reminds me of a Brandon Jones or Landon Cassill, someone who will be solid but not consistent enough to be a favorite. Still, it would be cool to see him get a shot.

The Superspeedway races make millions for NASCAR, which built, & owns both tracks, & Faux who sells the commercials.

The owners pay the price in torn up cars. They might get a small break with the new cars because some might be repairable, rather than being candidates for Dale Jr’s pond.

I would love to see both tracks redesigned with less banking so races could run W/O restrictors.

But not having come to my first race on a turnip truck. I know that’s not going to happen.

I’m just sorry that it took the death of Dale Sr. & Bobby Allison almost getting into the stands, for NASCAR to really get serious about driver & fan safety.

Nascar has introduced 2 stage breaks to generate artificial excitement in response to the need for perpetual game 7 moments. Given the trend and the apparent need for prostitution of the sport in the name of entertainment, why not just be honest with those fools like me that watch it every week and have a competition caution with 10 to go. If “entertainment” is defined by Nascar to be the half-wit with an attention span of a 2 year old and Nascar is trying to sell to that market to the exclusion of all others, then bunching up the field for a final Game 7 Moment makes perfect sense. I quit watching WWE when I got old enough to know that it was not a sport, but rather a performance. The current random policies on yellow flags (certainly there should have been one on the last lap of Talladega if driver safety was of primary concern) is pretty darn close to having the sanctioning body trying to influence the results.
A key reason why the 2nd and 3rd groove didn’t materialize is because the cars all go the same speed on a track where it is hard to pass. Give the teams some latitude to develop advantages so that there can be differences in speed and gain back that ability to pass. Everyone being the same makes for a dull world, and a dull “performance.” (I almost called it a race again, gosh)