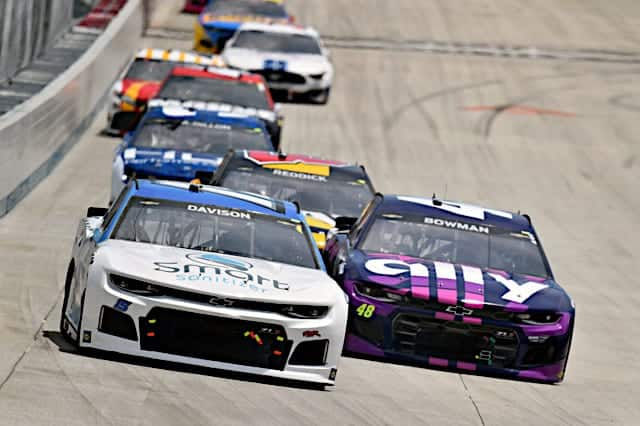 Hendrick Motorsports finished 1-2-3-4 at Dover Motor Speedway in 2021 in the NASCAR Cup Series. Is it the favorites once again, or will a new challenger emerge on Sunday?

Last year’s NASCAR Cup Series race at Dover Motor Speedway was absolute domination by Hendrick Motorsports. Its cars combined to lead 382 of the 400 laps and finished 1-2-3-4, the first time that a team swept the top four positions of a Cup race since RFK Racing did so at Homestead-Miami Speedway in 2005.

Hendrick should reprise its role once again as the favorites for Sunday’s (May 1) race, but there will be new obstacles that the team will have to face.

First, the 2021 running was largely uncompetitive at the front of the field, as drivers struggled to pass. William Byron’s pass of Martin Truex Jr. for the lead on lap 17 was the only on-track lead change of the afternoon, and the lead thereafter went to the driver that won the race off of pit road.

However, drivers have indicated that the Next Gen package will lead to a different type of racing at Dover this weekend, one where there will be passing and action at the front of the field. And if cars are able to pick their way through the field, Hendrick won’t have as easy of a monopoly on the top spots as they did last year.

Despite this, Hendrick will also benefit from its biggest rivals at Dover having disappointing seasons in the Next Gen car. Kevin Harvick, Denny Hamlin and Truex are the three most recent Dover winners outside of the Hendrick camp, and they have all suffered from slow starts to the season.

Harvick has shown inconsistent speed, with a sixth-place run at Phoenix Raceway and a near-win at Richmond Raceway as the only two races where he made noise toward the front. Hamlin passed Byron and held off Harvick in the closing laps for the win at Richmond through tire strategy, but it’s his only top-10 finish of the season. Truex has been the best of the three with top 10s in half of his starts, but Richmond and Las Vegas Motor Speedway were the only races where he was a factor for the win.

If Hendrick is to receive challenges at the front of the field, it will either come from Truex, Harvick or up-and-comers like Ross Chastain, Chase Briscoe or Tyler Reddick. But if all goes well, Dover will be Hendrick’s race to lose.

Chase Elliott has quietly emerged as the Cup points leader. When will he break through into the win column?

It’s been an unusual 10 months for Chase Elliott. He cruised to a win on July 4 at Road America in 2021, scoring the second win of his championship defense and the 13th win of his career. That was 26 races ago, and he has not won since. And with his two 2021 wins coming on road courses, Elliott has not won on an oval since winning the championship at Phoenix Raceway in the 2020 finale.

The problem for Elliott has not been speed; since Road America, he has led 1,075 laps, 276 of them coming in 2022. The team has shown speed in the beginning and middle stages of races, but it has not been able to put it all together and be out front in the closing laps.

Even more perplexing is that in the middle of his winless drought, Elliott has been the tied or outright points leader for the last six races. Despite having zero wins and only one top five, Elliott has the most top 10s (seven), the best average finish (10.5) and 97 stage points, second-most behind Byron’s 99.

With the way he’s running, it’s hard to imagine that Elliott’s winless drought will last much longer. It is very likely that Elliott will win or at the very least contend for the win in the upcoming stretch of races at Dover, Darlington Raceway and Kansas Speedway.

Elliott will automatically be one of the favorites at Dover, as Hendrick was dominant in 2021 and Elliott has one win and eight top-five finishes at the track in 11 starts. Elliott also has a previous win at Kansas and finished runner-up behind teammate Kyle Larson there last October. And although he hasn’t won at the track, Elliott was a factor to win two of the three races held at Darlington in 2020.

Elliott’s first win of 2022 may not come in the next three races, but with his current performance, it would take an incredible turn of events for him to still be winless when July 4 rolls around once again.

Does the Xfinity Series have a new Big 3?

The term Big 3 came into widespread usage in NASCAR during the 2018 Cup season, as Kyle Busch, Harvick and Truex combined to win 17 of the first 23 races. The second iteration occurred during the 2019 NASCAR Xfinity Series season, where Christopher Bell, Reddick and Cole Custer combined to win 24 of the season’s 33 races, with Reddick winning the championship at Homestead.

Three years later, a new Big 3 appears to be forming in the Xfinity Series for 2022.

AJ Allmendinger, Ty Gibbs and Noah Gragson have combined to win six of the first nine races. The three drivers also occupy the top three spots in the point standings by a comfortable margin, as fourth-place Josh Berry is 100 points behind leader Allmendinger and 55 behind third-place Gibbs.

It’s too early to officially crown them as a new Big 3, but it appears that these three will be the drivers to beat for the upcoming weeks. And if their dominance continues through the halfway point of 2022, they will be the three to watch for the rest of the season.

With the Speedway Motorsports, Inc. purchase of Dover, what is the future of the track beyond 2022?

From 2015 to 2020, the Cup schedule was locked in place with no additional tracks allowed. Of the tracks on the Cup schedule during this time, all but two of them were owned by the now-defunct International Speedway Corporation or SMI: Dover and Pocono Raceway.

Dover Motorsports, Inc. owned Dover and Nashville Superspeedway, but on Nov. 8, 2021, SMI finalized a deal to acquire DMI and its two properties, with full control transferred to SMI for the 2022 season.

Nashville has a contract that runs until 2024, so its spot on the Cup schedule is safe for the time being. But for Dover, the sale of DMI raises some alarm bells.

It’s no secret that Dover has struggled with attendance in the last few years, and this culminated with the track losing its playoff race for 2021 and beyond.

Cup and Xfinity returns to the track this weekend, and when combined with the recent attendance struggles and an ownership change, there is a chance that this might be the final NASCAR weekend at the track.

Therefore, Dover needs to have a good showing in the stands. If not that, the racing in the Next Gen car will have to live up to the expectations that the drivers have set on it in the past week. Because if the race itself is a smashing success, it will spark interest in having the series return for 2023. Dover is on very thin ice at the moment, and nothing can be taken for granted this weekend.

That said, there is a small, but noticeable indicator that the track may have a future with SMI after all: The logos for SMI-owned tracks all share the same design, and when the Dover purchase was finalized, SMI unveiled a new logo for the track.

SMI also changed the name of the track from Dover International Speedway to Dover Motor Speedway, which matches the naming consistency of its other properties.

If SMI had zero intentions of racing at Dover beyond 2022, it would not have bothered to change the name and logo. As subtle as a change it may be, it shows it is trying to make racing at Dover work.

Regardless of what happens this week, the answers for Dover won’t be answered until the 2023 schedule is released later in the year. Until then, Dover has to enjoy this weekend’s races and then hope for the best.

With Dover now being an SMI track, if it again fails to live up to expectations with the new car.
For 2023 we could see it covered in dirt, run as an Australian Pursuit, run clockwise, or any and all combination of the three. As an added bonus it might feature a helmet throw.
If all else fails, there’s always the old short track filler race where the crew chief drives, with the driver on the pit box calling the race. That I’d pay to see, if Larry Mac was in it.

I’d hope that if any tracks are going to lose races, that they are tracks with two race dates. There is a lot to be said for variety of tracks on the schedule and Dover certainly is unique.

Dover is unique and should remain on the schedule. But its set up for failure as it will be a FS1 as was the race in 2021, but if it doesn’t post better numbers than the 2.43 M, its toast. It doesn’t provide enough side by side action to satisfy the short attention span fans of today. I wouldn’t renew your tickets just yet.

LOL… the days of reserving tickets for Dover are long gone. Now you just wait for the day, decide if you feel like going to a race that day, check the weather, and if all signs say go, you head to the track.

There was a time that I was at Dover for every race, but it’s been something like 15-18 years now, since I was last there. I have to give them credit for trying though, as I get emails from Dover year round, trying to sell me tickets. The funny thing is that I haven’t bought tickets to Dover since the 90’s. The last half dozen times I went I had comp tickets from Companies like Chevrolet and PPG.