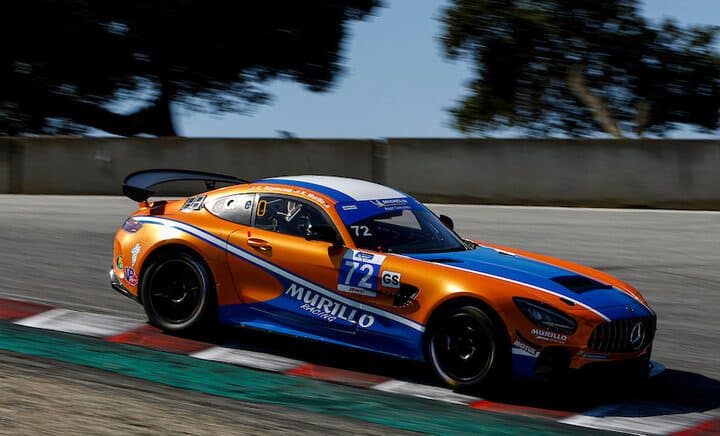 In IMSA Michelin Pilot Challenge practice Friday (April 29) at WeatherTech Raceway Laguna Seca, there was plenty of metallic orange to be had.  Christian Szymczak was fastest overall in practice with a lap at 89.155 mph in the morning session.

In the opening practice, there really wasn’t all that much progression as far as lap times were concerned.  The track surface at WeatherTech Raceway Laguna Seca is fairly worn out, meaning that the best laps came early.  Back on Wednesday, the Monterey County Board of Supervisors approved upgrades to the facility worth $9.7 million.  This will include a track resurfacing and a new crossover bridge at the start-finish line.

Murillo Racing’s Szymczak turned in his best lap at 89.155 mph 11 minutes into the session.  The Mercedes driver’s lap held up for the remainder of the session.

Szymczak’s lap was one-seventh of a second faster than Riley Motorsports’ Scott Andrews in the best of the Toyota GR Supra GT4s.  Rennsport One’s Stevan McAleer was third fastest in his Porsche, then CarBahn Motorsports with Peregrine Racing’s Tyler McQuarrie.  McCann Racing’s Andrew Davis was fifth.

Turner Motorsport’s Bill Auberlen was sixth in his BMW, followed by BGB Motorsports’ Spencer Pumpelly.  Capstone Motorsports’ Kris Wilson was eighth, best of the Bronze Cup participants.  Robby Foley in the second Turner BMW and TeamTGM’s Matt Plumb rounded out the top 10.  The top 11 drivers were within one second of Szymczak’s best lap.

In TCR, JDC-Miller MotorSports’ Mikey Taylor was fastest with a lap at 86.164 mph, good for 28th overall in his Audi RS3 LMS.  Taylor’s lap was a quarter of a second faster than the similar Audi of Road Shagger Racing’s Jon Morley.  Bryan Herta Autosport’s Ryan Norman was third in his Hyundai Elantra N TCR, followed by Stephen Simpson.  Mark Wilkins was fifth.

There was one red flag during the opening session when Capstone Motorsports’ Gary Ferrara stopped his Mercedes on-course.  40 of the 41 teams ventured onto the 2.238-mile road course during the session.  The lone holdout was Bryan Herta Autosport’s No. 77 Hyundai for Mason Filippi and Tyler Maxson.  The No. 77 team is racing a Veloster N TCR this weekend instead of the Elantra after the team’s Elantra was wrecked in Sebring.

The afternoon session was more of the same at the front of the field.  There was a landrush to get onto the track and post a quick time.  The best lap time was lowered multiple times in the first five to 10 minutes.  Szymczak’s teammate Kenny Murillo set a lap at 89.056 mph on his sixth lap at speed, 11 minutes into the session.  This time held up to top the session.

Murillo’s lap was one-seventh of a second faster than Kenton Koch, driving the No. 56 Murillo Racing Mercedes in place of Jeff Mosing this weekend.  Riley Motorsports’ Thiago Camilo in the No. 14 Supra was third fastest, followed by VOLT Racing’s Trent Hindman.  Foley was fifth in the No. 96 Turner BMW.

Plumb was sixth fastest, then Pumpelly and McQuarrie.  Stephen Cameron Racing’s Greg Liefooghe was ninth, while Kyle Marcelli was 10th in the PF Racing No. 877.  Note that Marcelli’s No. 877 Ford Mustang GT4 was originally entered as the No. 42 for PF Racing, but the number was changed to better fit in with sponsor JG Wentworth.

In TCR, VGRT’s Karl Wittmer was fastest in his Honda Civic Type-R TCR with a lap at 86.477 mph, best in class for the day and 28th overall.  Wittmer’s lap was one-sixth of a second faster than the Hyundai of Robert Wickens.  Teammate Harry Gottsacker was third, then Taylor.  Belgard & Techniseal Racing’s Denis Dupont was fifth in his Audi.

Qualifying for the WeatherTech Raceway Laguna Seca 120 is scheduled for 2:20 p.m. ET Saturday afternoon.  We’ll have a recap for you right here at Frontstretch.