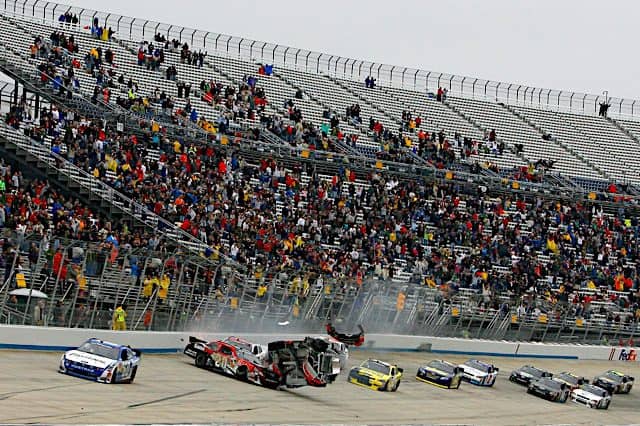 From 1971 to 2020 — for 50 years — the NASCAR Cup Series visited the Delaware circuit twice each season, with 2021 marking the first time the tour only had one event at the track since 1970. It’s a casualty of circumstance, with Dover’s on-track product dropping off considerably in recent years.

The Monster Mile has recently been a track that features certain, specific moments more than all-around great shows.

Its take-no-prisoners reputation was a bit more prevalent a decade-plus ago. Just take a look at the insane trailer for NASCAR the Game 2011, which definitely sold me:

While the game was lacking, its marketing of a bonkers Dover race that culminates in Greg Biffle barrel-rolling down the backstretch — well, we see the iconic walkway, but all of a sudden the entire field apparently teleports to the frontstretch, because all of a sudden the No. 16 is flipping past the flag stand. I digress. It looked awesome as hell and still does, even if the game was lacking.

Whether it’s that, its mascot Miles the Monster or constant replays of Joey Logano‘s real-life seven-flip tumble, the reputation is there for the1-mile oval — or it was, at least.

Every track lends itself to dominance at some point, of course. Jimmie Johnson won 11 Cup races at the track between 2002 and 2017 and no one could ever count out the No. 48 when it showed up to the high banks of Dover.

Couldn’t really automatically count him out when he lost control of his car there, either.

Johnson triggered a sizable crash about a decade later, but his prowess at Dover will likely never be surpassed. The Big One isn’t just a Daytona International Speedway or Talladega Superspeedway thing; Dover’s close-quarters racing and high banking have led to massive crashes, flared tempers and more. One of the more notable examples was in 2011, when a late-race NASCAR Xfinity Series battle between Logano and Carl Edwards led to a near-Clint Bowyer flip and Steve Wallace, Mike Bliss and several others piling in at full speed.

In 2005, another trademark melee broke out on the backstretch of an Xfinity race, and out of the smoke came a tumbling Donnie Neuenberger, the solo roll a cause of the No. 52 getting pinched between two cars.

Dover primarily had a penchant for chaos, but we can’t forget Dale Earnhardt Jr.‘s win in the first race after 9/11. As the nation tried to begin to heal, the heir apparent to the Most Popular Driver Award claimed victory at Dover, similar in sentiment to how Mike Piazza hammered a two-run, go-ahead homer to boost the New York Mets to a win in New York’s first major sporting event since the attacks.

Even weirder than the odd crashes was when a chunk of concrete came loose from the racing surface and an unfortunate Jamie McMurray slammed into it, prompting a red flag for repairs.

That happened in 2014, and things have kind of gone downhill from there. Recent races have featured more and more consistent dominating runs for whoever is lucky on race weekend, with drivers leading 200-plus laps on a constant basis rather than occasional back-and-forth races entering the mix. For all of its past hallmarks, the Monster Mile has turned into the Monster Mild. Has someone made that joke before? Probably.

But it’s hard to pinpoint the exact cause. Maybe the Gen 6 car didn’t quite take to the high banks of the track and the Next Gen will put on an incredible show this weekend as this race weekend bridges the gap between April and May.

Sunday (May 1) might be a do-or-die for Dover with the new car’s on-track debut. If it disappoints, 2022 might be the death knell for Dover as we know it.

I have different memories of Dover. Back when it was a 500 mile race, we didn’t call it the Monster Mile, we called it the Longest Day. Those races seemed to never end, and some of them were real stinkers. 1995 in particular sticks out as a really bad year in my mind. The spring race was delayed by rain. When it finally did start Kyle Petty led something like 250-300 laps, and Gordon led the balance. Then in fall, Gordon came back and led something like 400 laps. After sitting through five hours of racing, a two hour ride home always took another five hours. It seems to me that these races, with very little lead changes, were pretty typical of Dover.

I was at Dover when the IRL ran Indy Cars there. Fully a third of the 20 car field was eliminated in crashes, and the winner led about 150 of 200 laps.

Don’t get me wrong, I do have some good memories from Dover. I was there in 2001 when Jr won. To watch him take the victory lap with the US flag was something special. I also remember the Busch race when Todd Bodine driving a primered car, got his first win when Davey Allison ran out of gas with a lap to go.

I’d miss Dover if it was dropped from the schedule. Maybe not so much because it provided good races, but because it’s a unique track, in a sea of one and half mile ovals.