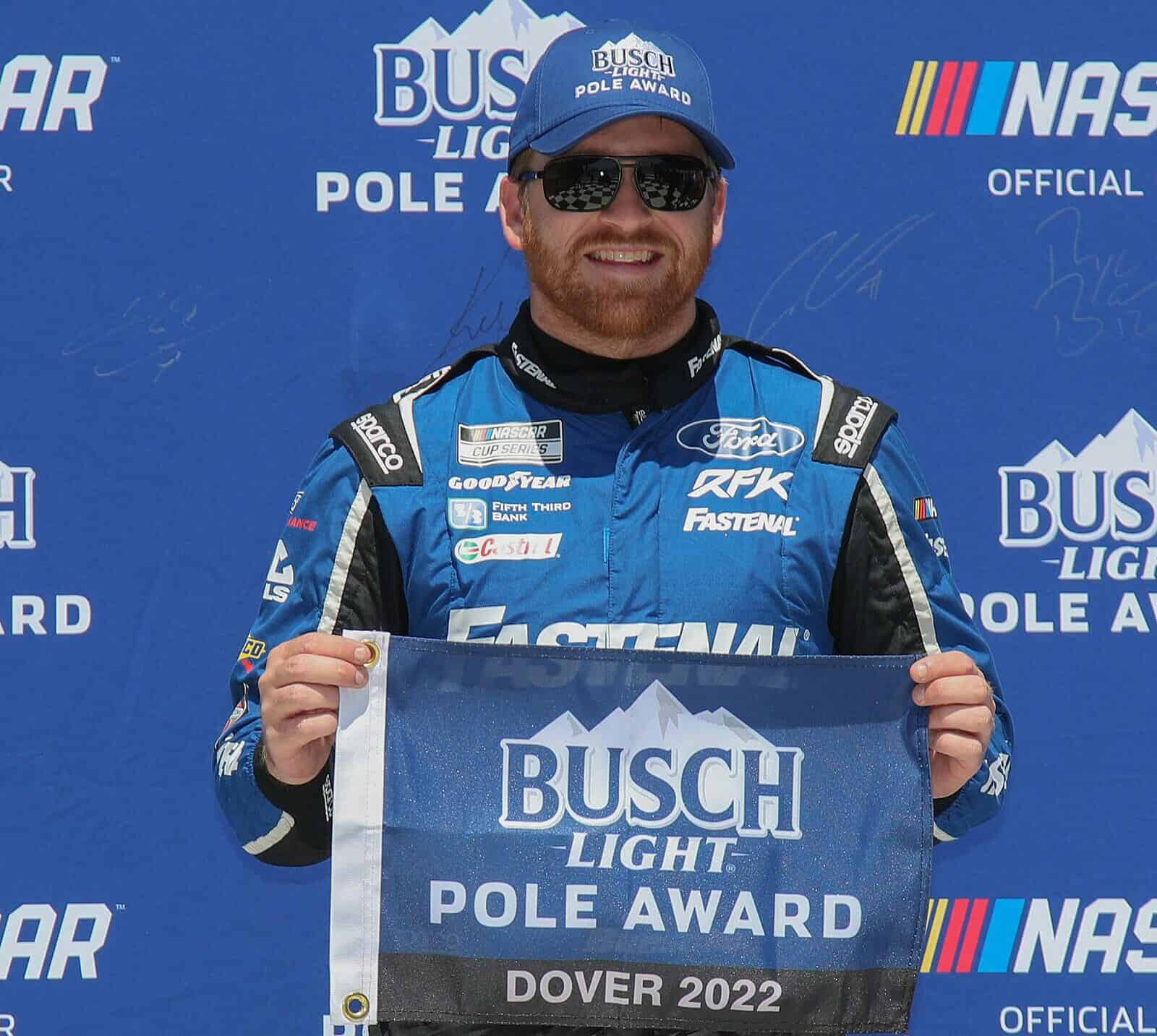 Buescher claimed the top starting spot for Sunday’s Drydene 400 with a speed of 160.149 mph.

The pole comes in what will be his 233rd career Cup start.

It also marks the first time since 2013 at Texas Motor Speedway that a RFK Racing car will start from the pole for a non-superspeedway NASCAR Cup race. The team’s last overall pole was in 2017 at Talladega Superspeedway.

“That’s just awesome right there,” Buescher told Fox Sports 1. “Good effort in practice in the first group. Found some speed and went out there and put down some really good laps. … That’s a heck of a start. Good momentum. Proud to do it here at Dover, I love this place. It’s a ride. We’re flying around here. That’s more throttle time than I think we’ve ever had at Dover.”

It is also Buescher’s first overall NASCAR pole after not earning one in the Xfinity Series.

“I guess it’s not something that I’ve ever had a whole lot of emphasis on,” Buescher added later. “But it is cool. I’ve been really close here at Dover on the Xfinity side and this has been a place that I’ve loved coming to forever and loved watching it on TV so it is cool to get it here. … It’s been a long time coming.”

The top five was completed by Kyle Larson, Chase Elliott and Ryan Blaney.

Prior to qualifying, two 20-minute practice sessions were held with the field split in half for each one.

Cindric, who claims Dover as one of his favorite tracks, posted a top speed of 157.846 mph.

“The edges we’ve seen in this car is very small,” Cindric told Fox Sports 1. “Even the times I felt like I landed in the corner and got a bit neutral. You’re working with a couple of centimeters of sidewall flex before you have to really correct. It’s interesting, but this is a very tough race track for cars and we’re going a lot faster than I thought we would.”

The first session was plagued by two accidents.

The first was for a spin by Todd Gilliland in Turns 3-4. Gilliland hadn’t even completed his first lap at the time.

Good morning from the @MonsterMile!

We've already got action in practice 👀

A few minutes later, Josh Bilicki got loose after exiting Turn 2 and wrecked. That brought out the red flag.

The Monster is here.

The No. 77 takes some damage early in practice. pic.twitter.com/rl9QR39frC

The second session also had its share of problems.

Almost immediately after it began, Daytona and Atlanta winner William Byron hit the wall in turns 3 and 4, severely damaging right side of his No. 24 Chevrolet. That forced the team to go to a backup car.

“Just a little bit over confident on my end,” Byron told FS1. “Paid the price for it … Drove it in deeper than I should have on the first lap.”

Right behind him, Tyler Reddick went for a spin in his No. 8 Chevrolet.

So … The Monster is hungry this morning … pic.twitter.com/TzTu0aurjN

Only a couple of minutes after practice resume, rookie Harrison Burton went for a spin entering turn 3. He slid up the track backed into the outside wall.

“Got through (turns) 1 and 2 really good on that lap, pretty confident going into (turns) 3 and 4,” Burton told FS1. “As soon as I turned into the corner I just lost the back of the car. It just snapped around real quick. … Obviously a lot of guys have had some issues. It’s really hard to say why.”

With about nine minutes left, Reddick got into the wall lightly while exiting turn 2.