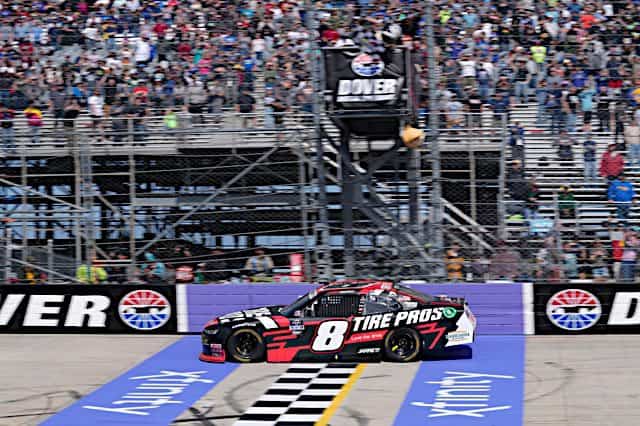 Josh Berry, driver of the No. 8 Chevy Camaro for JR Motorsports, won the A-Game 200 at Dover Motor Speedway after leading 55 of the 200 laps in Saturday’s (April 30) NASCAR Xfinity Series race.

Berry had a strong car all day and secured his third win of his career by dominating the later portions of the race.

“I think if you watch that back, you would think I would look like a weapon from the beginning,” Berry said in a post race interview with Jamie Little of FOX Sports. “I struggled a lot on the bottom on the restarts. I don’t know, we were just trying to work and get better. It’s such a credit to these guys as they have just kept me in it. The pit crew did a phenomenal job today and executed it when we needed it. We were there when it counted.”

Justin Allgaier finished second, led a race-high 67 laps and won stage two. The third-place finisher was the lone driver that was not a part of the JRM program, Ty Gibbs, who drives the No. 54 Toyota Supra for Joe Gibbs Racing. Gibbs only led a single lap at Dover.

Finishing fourth was Noah Gragson, who won the Xfinity Dash 4 Cash prize money of $100,000 by finishing ahead of the other three drivers: AJ Allmendinger who finished sixth, Ryan Sieg (10th) and Landon Cassill (12th).

Wrapping up the top five was the driver of the No. 1 Chevy Camaro for JRM, Sam Mayer. Mayer led 18 of the 200 laps and won the first stage. Mayer lost a wheel following an early pit stop and later sped on pit road.

Even though this race had five cautions for 36 laps, the time of the race was roughly north of one hour and 55 minutes. Only seven lead changes throughout the course of the day let Berry seal the deal and score his first win at the Monster Mile.

Allmendinger currently leads over Gibbs and Gragson in the standings.

Next week, the Xfinity Series heads to the track known as the Lady in Black, Darlington Raceway. Drivers will race 200 laps around the track they say is Too Tough to Tame starting at 1:30 p.m. ET on FS1, MRN and Sirius XM NASCAR Radio.