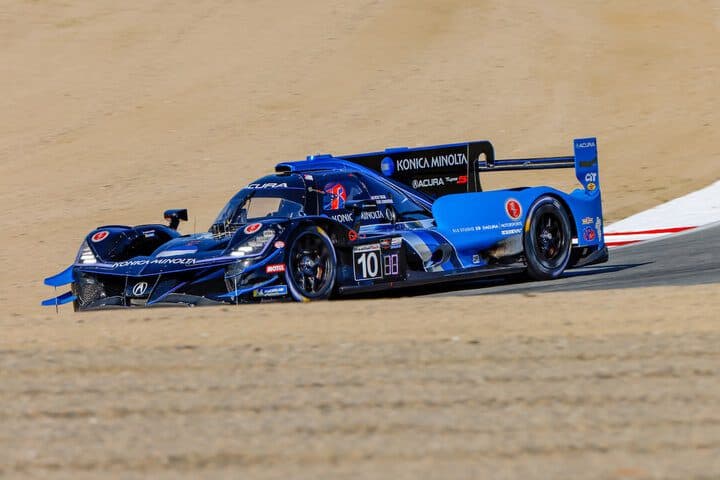 Wayne Taylor Racing’s Ricky Taylor came to WeatherTech Raceway Laguna Seca with plenty of speed in his pocket. The Florida native was quickest overall in both pre-qualifying practice sessions with a best lap at 108.592 mph.

Friday (April 29) saw WeatherTech teams have 90 minutes of practice on the 2.238-mile road course.  For the most part, issues were limited during the session, but a couple of teams were forced to make repairs.

Meyer Shank Racing with Curb-Agajanian’s Tom Blomqvist went off-course in the Corkscrew right at the beginning of the session.  There was no visual damage to the car, but Blomqvist took his Acura to the pits for a checkup.

Later on, Chip Ganassi Racing’s Renger van der Zande spun off at turn 5 and damaged his Cadillac after contact with the Porsche of GMG Racing’s Kyle Washington.  While he was able to drive back to the pits, the red flag came out due to the fact that van der Zande left debris on-track.  Washington was judged to be responsible for the incident, resulting in team owner James Sofronas having to serve a drive-through penalty.

Early on, Action Express Racing’s Tristan Nunez was fastest in his Cadillac.  However, Taylor put himself at the top of the chart 15 minutes in.  He then improved his time to an eventual lap at 108.290 mph.  Drivers took shots at that lap for the remaining 70 minutes in the session, but the lap held up as the fastest of the day.

Taylor’s lap was two-thirds of a second faster than Meyer Shank Racing with Curb-Agajanian’s Oliver Jarvis.  Blomqvist’s early off-course excursion ultimately did not hurt the No. 60 Acura.

JDC-Miller MotorSports’ Tristan Vautier was the quickest of the Cadillacs in third, followed by Action Express Racing’s Pipo Derani.  Van der Zande set a lap after his incident that was good enough for fifth.

In the GT ranks, Vasser Sullivan’s Jack Hawksworth turned in a lap at 95.959 mph with 10 minutes remaining in the session to top the GTD Pro class in 13th overall.  Hawksworth’s lap was two-tenths of a second faster than WeatherTech Racing’s Daniel Juncadella.  PFAFF Motorsports’ Mathieu Jaminet was third in his Porsche, then BMW M Team RLL’s John Edwards.  The Heart of Racing’s Alex Riberas was fifth.  The entire GTD Pro class was separated by just three-quarters of a second.

In GTD, Turner Motorsport’s Robby Foley was fastest in his BMW M4 GT3 with a lap at 95.647 mph, good for 15th overall and third-best of all GT teams.  Foley’s lap was less than seven-hundredths of a second faster than the Porsche of Wright Motorsports’ Jan Heylen.  The Lexus of Vasser Sullivan’s Aaron Telitz was third, then Jeff Westphal in the CarBahn Motorsports with Peregrine Racing Lamborghini.  Paul Miller Racing’s Madison Snow was fifth.  Of the 20 GT teams entered this weekend, 16 of them were within one second of Hawksworth’s best time.

Saturday morning’s practice session was more of the same.  Taylor put his Acura ARX-05 on top of the timesheet 20 minutes in.  Unlike Friday, this would have been in his first couple of laps on the track due to the split that only allows amateur drivers on-track for the first 15 minutes of the session

Taylor’s time stood all the way until the final 15 minutes, which are dedicated to only the DPi and GTD Pro classes.  In the last couple of minutes, Taylor lowered his time significantly.  The fastest lap of the weekend came with barely a minute remaining in the session.

Taylor ended up one-eighth of a second ahead of Chip Ganassi Racing’s Sebastien Bourdais.  Jarvis was third, then Alex Lynn in the second Ganassi Cadillac.  Derani was fifth.

There was one red flag during the session that occurred when Meyer Shank Racing with Curb-Agajanian’s Tom Blomqvist, Wright Motorsports’ Ryan Hardwick and Tower Motorsport’s John Farano all came together in turn 6 and went off.  Everyone was able to drive away on their own and continued, but there was debris and sand on the track.

Bomarito was fastest in LMP2 with a lap at 105.157 mph, seventh overall.  The lap was two-tenths of a second faster than Montoya.  Deletraz was third, then Dalziel.  Josh Pierson in the second PR1 Mathiasen Motorsports entry was fifth.

A late flyer from Juncadella put the WeatherTech Racing No. 79 Mercedes on top in GTD Pro with a lap at 96.742 mph.  This was a little more than a tenth of a second faster than Jaminet.  Hawksworth was third fastest, then Riberas and Connor de Phillippi in the BMW.

Heylen spent much of the session fastest overall of all the GT drivers with his lap at 96.027 mph.  While that lap ended up being fourth in GT and 16th overall, it held up to be fastest in GTD.  Heylen ended up three-tenths of a second faster than Frankie Montecalvo in the Vasser Sullivan No. 12.  HTP Winward Motorsports’ Russell Ward was third in his Mercedes, then NTe Sport’s Jaden Conwright.  CarBahn Motorsports with Peregrine Racing’s Robert Megennis was fifth.

Qualifying for the Hyundai Monterey Sports Car Championship is scheduled for 3:50 p.m. ET Saturday afternoon.  The session will be streamed live at both IMSA.com and on Peacock.