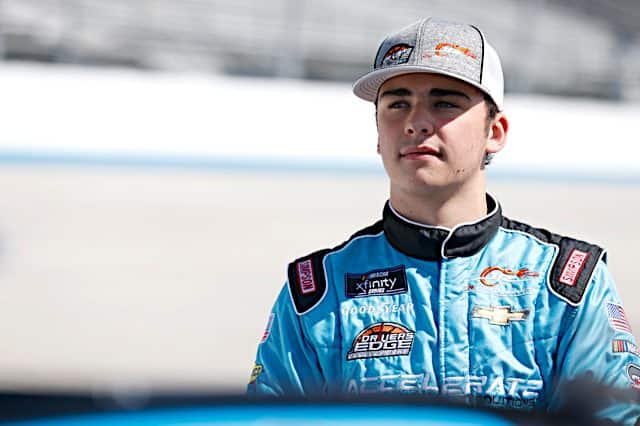 DOVER, Del. — It wasn’t Miles the Monster who bit Sam Mayer on Saturday in the A-GAME 200 from Dover Motor Speedway, but rather pit road hiccups over the course of 200 laps.

Even after a tire falling off from the lead and a pit road speeding penalty, Mayer persevered for a fifth-place finish, his fourth top five in the last five events.

“Roller coaster of a day, to say the least,” Mayer said. “You’re successful in racing when you’re disappointed with a top five. We passed, I don’t know, like 50 cars or something like that today, felt like 100. We definitely worked our tails off for this top five.”

JR Motorsports led the way for all but 61 circuits on Saturday, as Josh Berry (race winner) and Justin Allgaier (runner-up) paced the field for the majority of the race, with Mayer doing so for 18 laps and earning the stage one victory, his second playoff point of the season.

“Obviously the company had a really good day,” Mayer said. “But sucks being on the bottom of the totem pole.”

Dover is a track Mayer has had immense success at throughout his brief career, earning a K&N Pro Series East and ARCA Menards Series East victory in 2019 and 2020, respectively. It also mirrors Bristol Motor Speedway, where he’s won countless K&N/ARCA events and earned his lone Camping World Truck Series victory in 2020.

“Nine times out of 10, the track is really high grip, you’re gassing it wide open and not saving tires at all. That’s pretty much what my driving style is, gassing it up and go,” he explained. “Any track like that, I’m usually pretty good at. We just gotta get a couple spots better and be there with everybody else.”

Mayer was admittedly a bit overconfident heading into the race weekend, given his prior results at the Monster Mile. And running top five practice times and earning his first career Xfinity Series front row starting spot (second) helped build that confidence heading into the race.

“I know I’m really good here, have had a lot of success here in the past,” he said. “I just held my head on that with an ego a little bit, not gonna lie. I kind of proved it here today that I can do it, we just gotta put a full race together and prove that we can put it in that No. 1 spot.”

“Been a heck of a weekend for us. I should be super proud of myself and happy for myself. But there’s this weird feeling inside of me that says we gotta dig deeper and go harder. The team deserves it because they’ve had such good cars every weekend. I’ve gotta get them a win.”

Coming from the back twice over 200 laps, he leaves @MonsterMile disappointed wanting much more.

🗣 "We gotta dig deeper and go harder […] I gotta get (the team) a win here." @JRMotorsports pic.twitter.com/86lHjhKstu

His JR Motorsports teammate Allgaier has two wins at Dover and hasn’t finished outside the top 10 in his last nine events at the track (11 of his last 12). But Mayer didn’t really lean on the savvy veteran for advice in getting around the concrete oval.

“There’s weeks that I rely on my teammates quite a bit and there’s weekends that we all do our own separate things and we’ve all gotten used to it,” he said.

So, what needs to change or improve in order to take that next step and get into victory lane?

“We got a lot of the nit-picky details to work on, whether it be myself of the team in general,” Mayer said. “We’re really good obviously, we have a lot of speed. We just have to put all the details together to make a race happen.”

That task will get tougher for the next month or so, as crew chief Taylor Moyer is expected to be suspended due to the No. 1’s wheel coming off during the race.

Still, Mayer isn’t worried about whoever may be calling the shots. He’s focused on himself.

“It’s just gonna be frustrating. I know whoever’s gonna be on top of the box, whether it’s Taylor or whoever, I have no idea I know they’re gonna be good. I’m just gonna keep my head down, focus on doing my job and let everyone else do theirs.”

The NASCAR Xfinity Series will take to Darlington Raceway for the Mahindra ROXOR 200 on Saturday, May 7 at 1:30 pm ET.

It is time for Dale Jr and Kelly to move up to the cup level. They have the nucleus of two young drivers ( Mayer and Gragson ) to build a team around. These two will be sought after by other teams because Hendrick has no room at the top. Easier said than done though unless Jr racing can get some of their Xfinity sponsors to move up with them.