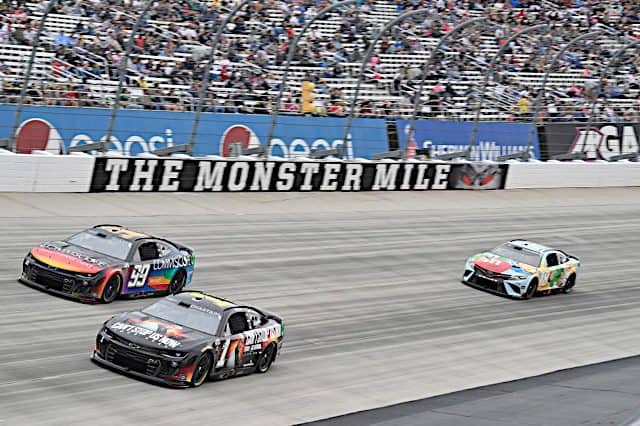 Just before 5:30 p.m. ET on Sunday (May 1), NASCAR officials announced that the final 322 laps of the DuraMax Drydene 400 from Dover Motor Speedway will have to wait for Monday (May 2). Kyle Larson leads over Chase Elliott and Ryan Blaney with only 78 laps complete.

As the green flag flew to start the NASCAR Cup Series race at Dover, the clouds above the track were as gray as the rubbered-in track surface. Weather radar did not look promising, and just 69 laps into the scheduled distance of 400 the rain started to fall.

NASCAR kept the cars circulating, hoping the light shower would pass by quickly, but Mother Nature wasn’t so friendly. The rain fell harder, so NASCAR put out the red flag and the cars filed down pit road behind Larson’s No. 5.

Larson, Elliott, Blaney and Martin Truex Jr. hold the top four positions after staying out under the lap 69 caution. So too did William Byron, who has made his way to fifth after starting from the rear due to a practice crash that put the two-time 2022 winner to the back of the field in a backup car. Christopher Bell and Aric Almirola, in sixth and seventh respectively, are the final cars that didn’t stop under caution.

In eighth, the first car to restart tomorrow with four fresh tires, Denny Hamlin’s No. 11 paced the field for 55 laps, the longest the Richmond winner has been up front in any race this season.

Hamlin caught up with FOX’s Jamie Little under the delay:

Alex Bowman and Kyle Busch finish out the top 10.

Chris Buescher, who started from pole for the first time in his Cup Series career, led the first 18 laps, the first time the RFK Racing driver has led laps at Dover. Buescher is scored in the 13th position after pitting under caution.

The rain gods still be angry with Brian.

Or with the lunacy and total disregard for common sense that starts a race at 3PM, at a track with no lights and only a 5 hour window to get in a 4 hour race. Had that race started at 1PM like it should have, we’d have been in the last 50 laps of the race when the rain came.

Like I wrote elsewhere, stopping for rain would have given NA$CAR another chance to gift Bubba a “win”. Maybe they gambled on getting past half way on Sunday for the chance.

Imagine being so mad that a driver you don’t like winning a race that you constantly cry about it on articles not related in the slightest to that driver.

sue
Reply to  Bill B

I totally agree. I belong to Fan Council and I have been complaining about this ever since they started this time table. Getting totally disgusted with the way Nascar is going. And also they are really letting their bias show.

Bill B
Reply to  sue

Please don’t stop complaining but when I participated in the Fan Council, I felt like a monkey repeatedly pushing a lever in an experiment, only with no reward.

You weren’t pushing the lever that gave the correct answer (the one they wanted/had already decided on). Thus, no reward! Bad monkey!

I’m old and admittedly lame – but I went to Dover every year until the date change (month earlier) and time change.

Same here. I went to the spring race for 20 straight years. This was the first time I’ve been back in about 7 years. Man did it change. They removed the entire top section all the way around, as well as some lower sections on the side. I’d bet there are 30% fewer seats than there were 20 years ago.

Yes – really sad. I haven’t been in a few years (since Jimmie’s final win) and instead have been hitting other tracks, but was there last year for Rusty Wallace Exp. and saw what you mention. I have selfish reasons of course – but I really believe Dover is one of the great tracks and absolutely critical to NASCAR considering its location. Have busted on SMI over their other mistakes – but really hoping they realize this one needs saving not “rescheduling”.

No race on the east coast should start after 1p.m. unless it’s a night race.

I’m sure the trend setter monitors and data miners at NASCAR and the networks have plenty of evidence 3 p.m. start times are affected more by weather than a 1p.m. start time.

Yet, NASCAR’s poor decisions continue to screw over the fans that still buy tickets and spend good money during race weekends.