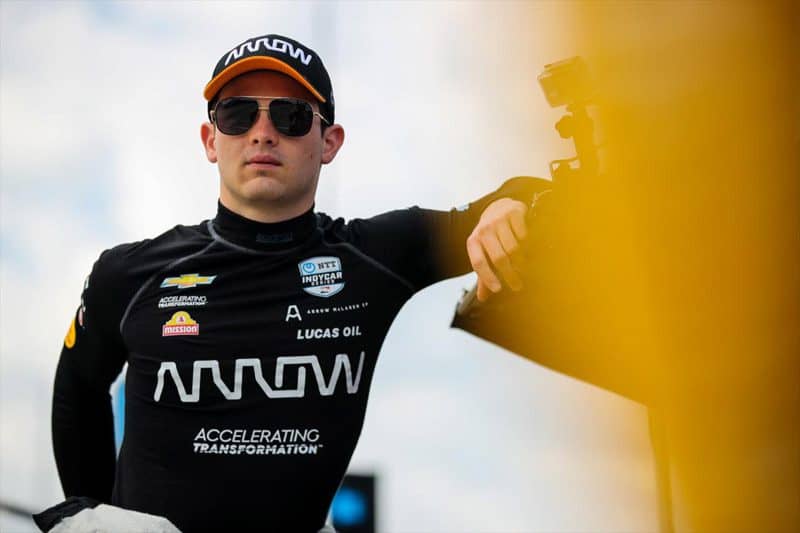 Pato O’Ward capitalized on a swift pit stop and good strategy to win the Honda Indy Grand Prix of Alabama on Sunday (May 1), his first NTT IndyCar Series victory on the 17-turn, 2.3-mile road course at Barber Motorsports Park in Birmingham, Alabama.

The win was the first of the season for the Arrow McLaren SP driver. Furthermore, the triumph came nearly a year to the date of the team’s most recent victory, which Mexico’s O’Ward also won, last May 2 at the XPEL 375 at Texas Motor Speedway.

He beat reigning IndyCar Series champion and last year’s Barber winner Alex Palou to the checkered flag by 0.98 of a second for his third series victory.

“I got on my button and got around [VeeKay in turn 5]. I knew if we would get into clean air, we could [control the race].”

O’Ward admitted his poor showings at St. Petersburg and Texas, where he finished 12th and 15th, respectively, were at least partially caused by ongoing contract talks with his team. However, he returned to form on Sunday.

“They’ve swept this year so far, so I think it’s great for them. I was tired of [finishing] 10th and 11th and fifth. So I said, ‘Let’s get a win under our belts so we can claw our way back into this championship fight.’”

A runner-up finish also propelled Palou to regain the series points lead in his first title defense. The driver of the No. 10 The American Legion Chip Ganassi Racing Honda has accumulated 144 points through four races this season.

“We had a good day overall, super happy with a P2,” Palou told NBC Sports’ Dillon Welch. “I did a mistake on a restart, so I think that was all the difference. (O’Ward) was really fast today. Super happy with the No. 10 American Legion Honda car was super fast all weekend and another podium. We’ll try on the next one.”

The pivotal moment of the race came at the end of lap 61, when VeeKay and O’Ward pitted together.

O’Ward made up most of what was then a two-second deficit due to a superb job entering pit road. When they exited their stalls, both drivers were nose to tail. But O’Ward lunged ahead of VeeKay outside of the turn 5 hairpin. And once the pit stop cycle was complete, O’Ward inherited the lead by lap 64.

VeeKay, who started from the pole, led 57 of the 90 laps but was forced to settle for third.

Palou pitted on lap 63 and overhauled VeeKay for second place. And while VeeKay faded as far back as 12 seconds behind O’Ward, Palou remained in the hunt.

But unlike last year’s race, when Palou overpowered O’Ward for the lead en route to the victory, this time O’Ward had his number and held for the win by just under a second.

VeeKay will be bummed considering how dominant he was this weekend, but in retrospect, the 21-year-old could find a reason to smile. It was his first podium in 11 months dating back to the Chevrolet Detroit Grand Prix Race No. 1. Furthermore, the Dutchman appears to have fully recovered from the training mishap he suffered in June.

Romain Grosjean, who was coming off a career-best second at Long Beach, came home seventh after a spirited battle with Graham Rahal in the closing laps as the two made contact while jockeying for position. Rahal was furious about the doorslam and vented over the radio, but to add insult to injury, the son of legendary Bobby Rahal, ran out of gas on the final lap but was still able to finish eighth. Alexander Rossi crossed the line in ninth and Colton Herta – who looped his car around trying to divebomb past McLaughlin – rounded out the top 10.

The first and only caution of the day came out on lap 33 when Callum Ilott, who made four passes in the first 19 laps, spun into the turn 7 gravel trap.

Replay showed Ilott attempting to make his fifth pass of the afternoon on 20-year veteran Helio Castroneves, but the 23-year-old entered the corner with too much speed and clipped the outside rumble strip before spinning his No. 77 Juncos Hollinger Racing Chevrolet. He wound up 26th.

Green conditions resumed on lap 36 with VeeKay holding charge over O’Ward and McLaughlin.

On lap 41, Jimmie Johnson spun around in Turn 8 after contact from Helio Castroneves. IndyCar reviewed the incident and issued a drive-through penalty to the four-time Indianapolis 500 champion for “avoidable contact.” Johnson finished 25th of the 27 cars in the field.

The GMR Grand Prix of Indianapolis is next on the schedule, taking place on Saturday, May 14, at 3 p.m. ET at the Indianapolis Motor Speedway road course. It will air on NBC.