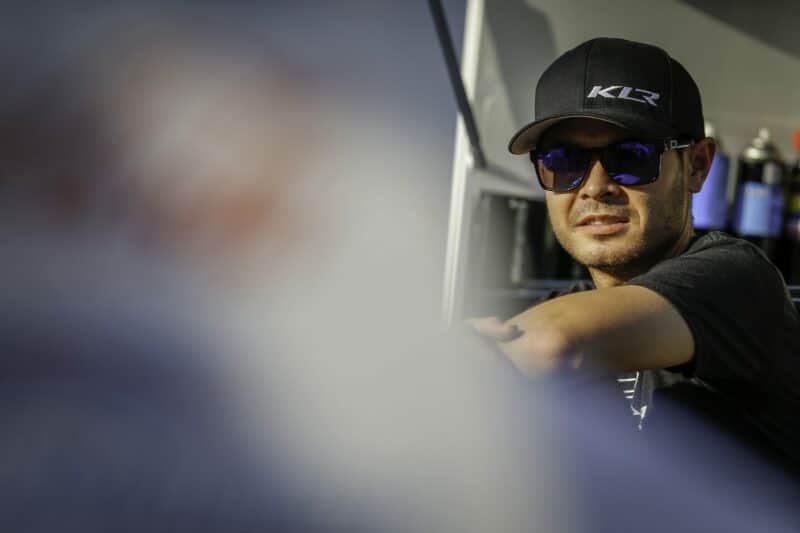 Jonathan Davenport continued to own the Bristol Motor Speedway dirt track while Kyle Larson led a charge of driver vitriol against the World of Outlaws.

On a rare doubleheader weekend for the touring series under the World of Outlaws banner, it was the late models that stole the weekend headlines. Saturday night’s feature saw 2019 series Rookie of the Year Ricky Weiss score a major breakthrough, finally scoring a Bristol win after showing speed all through this spring’s Bristol Dirt Nationals and last year’s WoO program at Bristol, besting Chris Madden after briefly losing the race leader to last year’s series runner-up around the mid-race point.

. @dirtvision REPLAY: @weissracing7 Dominated The night @BMSupdates!!!…fast qualifier, winner of his heat, he drew the pole, and won the feature!! pic.twitter.com/Flv9YzENzQ

Friday night’s show had far more fireworks. Not only did Jonathan Davenport break through to become the first driver to win a WoO from outside the front row since the return of Bristol dirt last year, he had to hold off a furious charge from the night’s hard charger, Larson.

. @dirtvision REPLAY: Tonight's Feature race @BMSupdates was won by @TheFast49 but it was @KyleLarsonRacin Who stole the show! pic.twitter.com/ymwkiYa5gx

Larson, who finished eighth after slapping the wall on the last lap trying to catch Davenport, had been forced to start at the tail of the field after his No. 6 car was late to the staging area for the night’s feature. Larson and owner Kevin Rumley both blasted WoO series officials for the decision (more on that later), part of a chorus of high-profile drivers taking very public digs at the WoO sanction.

The WoO sprint cars were also present at Bristol on Friday and Saturday night, with both points leaders Brad Sweet and David Gravel nowhere to be found in deciding the features. Saturday saw Spencer Bayston break through to score his first Outlaws of the season, besting Larson on a green-white-checkered finish after leading the opening 24 laps of the night from the pole.

Friday night’s feature went caution-free and saw polesitter Logan Schuchart lay waste to the field, part of a night where the Shark Racing driver swept qualifying, heat races, the dash and the feature.

.@SpencerBayston holds the sword high with $25,000 in his pocket tonight!

The @CJB_51 driver led all 25 laps at @BMSUpdates, but had to fight off @KyleLarsonRacin in a side-by-side nail biter to win it! pic.twitter.com/Wywbjz87as

Both feature winners at Bristol on Saturday deserve shoutouts for the way they scored said wins.

Spencer Bayston for one prevailed in a one-on-one duel with Larson in a sprint car, which requires no further explanation, but both navigated lapped traffic during a 24-lap green-flag run keeping Larson at bay, plus showing enough conviction on the GWC to stick to the high side of Larson even after losing the lead briefly in the corners was impressive for a Rookie of the Year contender.

As for Ricky Weiss, yes, he did lose a number of Bristol features before bringing this one home. But Weiss was impressive in how he bested Bristol Dirt Nationals champion Madden. Weiss ran the opening 10 laps of the race on the high side, actually losing the lead to Madden around lap 11. Forced to go to the low side with Madden taking his preferred line, Weiss went to the bottom… and actually made it stick. Running a couple laps on the lower groove, Weiss drove away from Madden and never was challenged again for the lead.

Aaron Reutzel’s 10th-place finish on Saturday wasn’t remarkable, but after scoring a podium finish on Friday Reutzel still has finished in the top 10 in every WoO feature since Bristol brought their dirt track back.

Kyle Bronson’s decision to skip the Flo Racing Night in America race at Brownstown on Wednesday to focus on Bristol paid off, with Bronson finishing third and fourth in the weekend’s late model features. That consistency has been missing from the No. 40B team this year to date.

.@LSchuchart1s was close to that weekend sweep!

Last night’s $25,000 winner finished P3 tonight and was right there with Bayston & Larson for the lead.

Fortunately for all involved, wrecks were few and far between during the Bristol Bash. And the worst of all of them came during Friday qualifying for the late models, with Don Hammer getting squirrely in Kyle Hammer’s backup car and pounding the inside wall, not to be seen again during the race weekend.

Kyle Strickler proved unable to shake the bad luck that saw a top-five finish at Eldora earlier in the week go out the window, breaking a driveshaft during Friday’s feature and then suffering from axle issues during qualifying Saturday; Strickler finished 15th in a 20-car field.

The hard-luck driver in the WoO sprint car ranks in 2022 has to be defending Rookie of the Year James McFadden. A week removed from getting caught up in an incident not of his making in Haubstadt, Indiana, McFadden brought out the only caution the sprint car ranks saw all weekend a lap short of the checkered in Saturday’s feature.

Scott Bloomquist ended up parking before the start of Saturday’s feature event after the team damaged their engine trying to open it up to find more power earlier in the evening’s program.

The 0 is having engine concerns and decided not to chance it. pic.twitter.com/eYT1A3CNfS

Defending Cup Series champion Larson made plenty of waves this weekend at Bristol despite going winless on the weekend. The only driver to run double-duty between the sprint car and late model tours, Larson scored top-10 finishes in all four features, finishing seventh in the sprint car on Friday and runner-up to Bayston in Saturday’s race.

The late models saw Larson challenge for the win on Friday before hitting the wall on the white-flag lap, then finishing fifth in Saturday’s feature.

Let’s stick with Larson, as his was the controversy of the weekend. Friday night saw Larson sent to the back of the field for the late model feature after his No. 6 car was late to staging. Larson was irate, as the decision to penalize Larson was a big one; the No. 6 car would have likely won Friday’s feature had it not had to start back in 20th in a 30-lap feature

Kyle Larson reasonably frustrated after that.

He gave a quote on DirtVision before this video on his thoughts on being sent back- "I'm the only guy doing double duty here. There is a lot of shit I have to do. It's no wonder that guys like Mark Richards are pulling off the tour." pic.twitter.com/WSet0m06Cd

Further, owner Kevin Rumley gave a detailed account of what he found to have gone wrong that left Larson buried in the field to start Friday’s event.

Kyle Larson's car owner Kevin Rumley responds to the call to send his driver to the rear of tonight's A-Main: pic.twitter.com/jG3N0Inwkk

Frankly, I’m not surprised this happened. Double-duty weekends where both WoO tours are sharing the racetrack usually don’t happen outside of the World Finals at Charlotte, and between Rumley’s comments about communication with series officials, as well as the questionable decision to park Larson’s late model rig in the sprint car side of the pits, does put some onus on the Outlaws to explain what happened.

Having said that, I’m not ready to throw the Outlaws under the bus here. For one, they’re 100% percent right to hold Rumley and Larson to the same rules as everyone else, regardless of whether they’re pulling double duty. Larson’s comments also sounded a Ty Gibbs level of entitled, taking a cheap shot at the WoO officiating as being a reason for the high-profile departure of Mark Richards’s Rocket house team from the tour (per Richards, it wasn’t) and complaining about having too much to do while attempting double duty.

That complaint was refuted by Outlaws officials.

This whole situation was sloppily handled by all involved, and Larson to his credit walked back his comments on Saturday. Let’s put this conspiracy theory that the Outlaws made this call to put on a show to bed… because get real, a dominant Larson win would have garnered the series more headlines than his hard charge coming up short did.

Ryan Gustin also threw shade at the Outlaw late model series in his heat race interview Friday, telling DirtVision’s Hannah Newhouse that “nobody wants to be here” and that the racing at Bristol sucked. While Gustin’s comments proved a bit premature, as the racing at Bristol was improved over a year ago (more on that later), the car count certainly validated Gustin’s take; neither the late models nor the sprint cars ran a B-main all weekend, with the weekend’s maximum car count only 45.

Speaking of Newhouse, anyone else find it amusing that the WoO late models are sponsored by Case Construction Equipment, yet the first pit road segment of the weekend that Newhouse conducted was done in front of a line of Caterpillar track prep equipment?

Part of the reason Jonathan Davenport was able to keep Larson at bay to win Friday’s late model feature was, according to the driver in victory lane, partially because a crew guy was able to signal to him to go high. This, despite the WoO late model tour banning the use of signal sticks a year ago. Talk about a toothless rule. The reality is, dirt racing, with its open pits that allow anyone willing to pay to score a pit pass, will never be able to stop use of driver signals. Stop pretending like banning the light sabers is accomplishing anything.

Yes, the racing at Bristol this year had its moments. Bayston and Larson’s GWC duel to end Saturday’s sprint car feature was nail biting, Larson’s charge through the late model field Friday was impressive and the mid-race duel Saturday between Weiss and Madden was good stuff.

Having said that, go by the numbers. For the second year in a row, 100% of the heats, dashes and features were won by cars in the front two rows. In fact, the ONLY racing event run this weekend not won from the front row was Friday’s late model feature… and that was won by third-place starter Davenport. Add in the fact that the average hard charger award on the weekend was a net gain of only four positions, and maybe Gustin wasn’t being too harsh.

1 – Caution that flew across two sprint car features at Bristol.

Where it Rated (on a scale of one to six cans with one a stinker and a six-pack an instant classic): The Bristol Bash scores three and a half Hap & Harry’s Tennessee Lagers. The on-track product was better than last year’s, and Larson both on and off the track made Friday night memorable. Still, I’ll go toe-to-toe with anyone that this track is too damn fast to justify continuing this experiment.

Up Next: We’ll be sticking with the World of Outlaws late model ranks, but fortunately heading to a real dirt track. The Dairyland Showdown will run Thursday, Friday and Saturday night at the Mississippi Thunder Raceway in Wisconsin, culminating with a $30,000-to-win feature Saturday night. Coverage can be found on DirtVision.