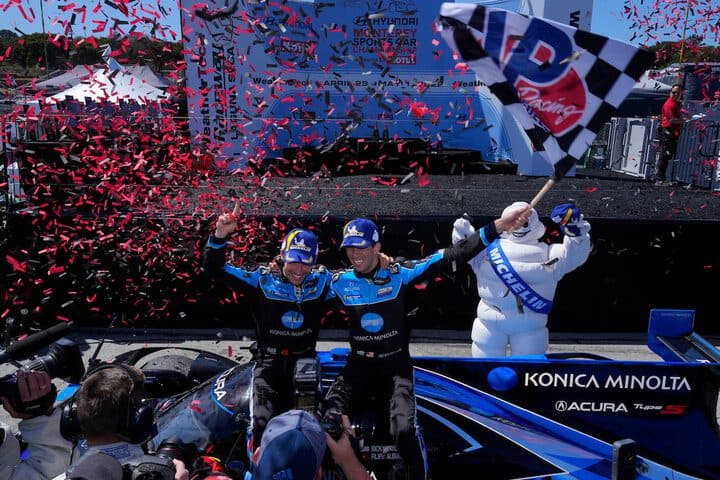 “It was really, really tough,” Albuquerque told NBC Sports’ Parker Kligerman in victory lane.  “I think traffic played a huge role.  In the beginning, I felt that I had a magical car.  I thought, ‘this is going to be a nice [race].’  Then, traffic was pulling me back and I always had [Tom Blomqvist] on my back.  Now, I had to push.”

Once the green flag came out, Ricky Taylor more or less ran off and hid from the rest of the DPi class.  He had a multiple-second lead early on, then ran up on the rear of the GT field and started putting lapped traffic between himself and Oliver Jarvis.

Meanwhile, Chip Ganassi Racing’s Sebastien Bourdais was forced to stop with electrical problems in the opening 15 minutes.  Bourdais described the issue on NBC’s broadcast as his car losing all power and being dangerous to drive.  After an attempt to fix it on pit road, the Ganassi crew pushed the No. 01 behind the wall, ending their day early.

An early caution brought the leaders to pit road just prior to the 40-minute mark, but Ricky Taylor won the race off pit road.  From this point on, it was a duel between the two Acuras from Wayne Taylor Racing and Meyer Shank Racing with Curb-Agajanian.

Ricky Taylor’s plan was to run his second stint as long as he possibly could.  However, Chip Ganassi Racing’s Alex Lynn slid off-course and nosed into the tires in turn 6, two laps after Tom Blomqvist stopped the No. 60.  With his tires up to temperature, Blomqvist was able to jump Albuquerque for the overall lead.  However, once Blomqvist’s time at the front was short-lived.  Once Albuquerque got his tires up to temperature, he drove up to Blomqvist and took the lead back.

For the remainder of the race from there on, Albuquerque and Blomqvist were never separated by more than three seconds.  Lapped traffic would allow Blomqvist to close back up on the Konica Minolta-sponsored Acura, but Albuquerque would just pull away.  In the last couple of laps, Blomqvist got back within a couple of car lengths of Albuquerque, but could not prevent Albuquerque from snatching the win.

Albuquerque and Ricky Taylor’s margin of victory was 1.08 seconds over Blomqvist and Jarvis.  Action Express Racing’s Pipo Derani and Tristan Nunez were the best of the Cadillacs, 26.744 seconds back in third.  JDC-Miller MotorSports’ Tristan Vautier and Richard Westbrook were fourth, while Lynn and Earl Bamber were a lap down in fifth after Lynn’s appointment with the tire barrier.

In LMP2, PR1 Mathiasen Motorsports’ Steven Thomas started from the pole, but did not keep his lead for long.  He locked up his tires entering the Andretti Hairpin on the first lap and spun.  That allowed DragonSpeed’s Henrik Hedman to take the early lead.  High Class Racing’s Dennis Andersen got up to second in the scramble, but dropped back behind Patrick Kelly.  Meanwhile, Tower Motorsport’s John Farano chose an alternate pit strategy, making his first stop 20 minutes into the race.  This put the team off-sequence.

Andersen won the race off of pit road during the caution to take the class lead, but quickly relinquished it to Kelly with Thomas in tow.  This held up until the second round of stops, where the amateur drivers got out in favor of their pro teammates.

Tower Motorsport made their second stop a little more than an hour in to put Louis Deletraz into the car.  Deletraz had been the fastest driver in LMP2 practice for most of the weekend and showed that pace quickly.  On fresh tires, Deletraz was able to put himself in position to have a substantial lead after the round of stops.  From that point on, Deletraz was able to maintain an advantage of between 20-30 seconds over the rest of the class en route to his and Farano’s first win of the year.

Deletraz and Farano’s margin of victory was 23.211 seconds over Era Motorsport’s Dwight Merriman and Ryan Dalziel, who recovered from an early spin for Merriman.  Hedman and Juan Pablo Montoya ended up a lap down in third due to the placement of the overall leader at the finish (Montoya finished his final lap 47 seconds behind Deletraz).  The team’s charge was hurt by an uncharacteristic spin for Montoya while trying to get into the pits.  PR1 Mathiasen Motorsports’ Kelly and Josh Pierson were fourth, while teammates Thomas and Jonathan Bomarito were fifth.

GTD Pro was dominated by PFAFF Motorsports.  Mathieu Jaminet won the class pole Saturday in his Porsche, got a good start to the race, then got comfortable at the front.

The only time that the red, black and silver Porsche was not at the front of the class Sunday was during rounds of pit stops.  When Matt Campbell got in the car, it was really no different as Campbell was also able to pull away at will.  The No. 9 Porsche 911 GT3 R was the fastest GT car on track Sunday and no one could hang as Campbell and Jaminet took an easy win.

Unfortunately for Ward, he was unable to have another chance at the lead.  33 minutes into the race, Ward lost control of his Mercedes-AMG GT3 Evo exiting turn 6 and spun head-on into the wall.  This brought out the race’s first full course caution.

During the caution, the Rick Ware Racing Acura of Ryan Eversley violated the wave-around procedure and effectively got a lap ahead of the rest of the class.  That is a no-no.  That move resulted in a stop and 230-second hold penalty, which equates to a two-lap penalty.  The penalty took Eversley and Aidan Read from the class lead to a lap down and out of the hunt for any kind of a decent finish.  They would eventually finish 12th in class, four laps down.

On the restart, Foley got hit entering turn 3 by Jordan Taylor.  Foley was able to save his BMW, but lost what ended up becoming the class lead to Paul Miller Racing’s Madison Snow after Eversley served his penalty.  Foley was able to keep pace with Snow and eventually got the lead back 12 laps later.

Once Bill Auberlen got in the No. 96 BMW, he was able to pull out a decent advantage over the rest of the class.  It looked liked IMSA victory No. 65 for Auberlen was in play.  Wright Motorsports’ Jan Heylen wasn’t comfortable with that.

After the final round of stops, Heylen was fourth in his Porsche behind Auberlen, Paul Miller Racing’s Bryan Sellers and CarBahn Motorsports with Peregrine Racing’s Jeff Westphal.  Heylen then made his move, getting past Westphal, losing the spot, then getting it back.  Shortly afterwards, Heylen was able to dispatch of Sellers for second.

Once Heylen got in second, he started to pour it on.  At the same time, Auberlen began to fade.  As a result, Heylen ran down Auberlen and passed him for the lead with 13 minutes to go.  From there, Heylen pulled away to give himself and Ryan Hardwick their second win of the year.

Heylen and Hardwick finished 5.517 seconds ahead of Westphal and Robert Megennis.  Westphal was able to get past the Auberlen/Foley BMW right at the line for second.  Sellers and Snow were fifth, while Team Korthoff Motorsports’ Dirk Mueller and Stevan McAleer were fifth.

IMSA WeatherTech SportsCar Championship teams will take next weekend off before traveling to Mid-Ohio Sports Car Course for the Lexus Grand Prix at Mid-Ohio.  The race will air on May 15 at 2 p.m. ET on USA.