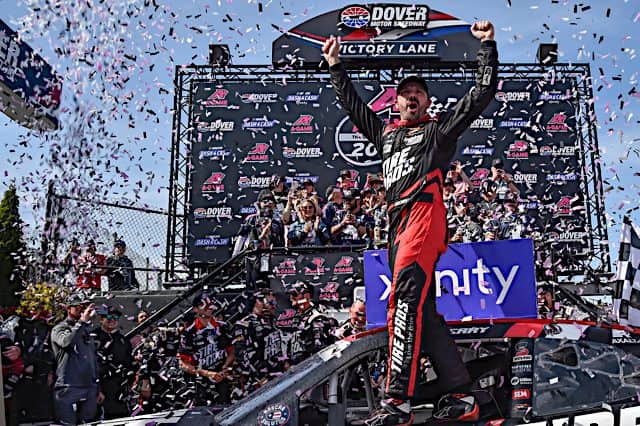 It was all JR Motorsports all day long on Saturday (April 30) at Dover Motor Speedway in the A-GAME 200. If you’re a fan of green flag racing (like I am), this one was for you.

Josh Berry took home the NASCAR Xfinity Series win after taking the lead with 53 to go. His teammate Justin Allgaier came in second, while Ty Gibbs, Noah Gragson and Sam Mayer rounded out the rest of the top five, and yes, you read that correctly. That marks all four JRM cars in the top five, but we’ll get into that later. Wheelmen got to be wheelmen and rookies got broken in to one of NASCAR’s most unforgiving tracks today, so with that being said, let’s jump in.

Firstly, JRM as a whole. The last time a feat like this was accomplished in the Xfinity Series was when Joe Gibbs Racing did it at Darlington Raceway in 2013. Now, almost a decade later, Dale Earnhardt Jr.‘s Xfinity squad has earned themselves some elite company.

The craziest thing about it, though? A different JRM car won each stage. Mayer won the first before a pit road travesty (again, more on that later) sent him to the back of the pack. “Mr. Monster Mile” Allgaier took home the stage two win, and Berry used a late overtake to seal his first victory of 2022. Last week we talked about how good of a day Chris Our had at the office, but Earnhardt Jr. has one-upped him this week to the fullest extent.

I had to sit and think a minute before I made this decision, but our last winners spot has got to be a tie between Justin Allgaier and Noah Gragson. Come to think of it, I should have just named this section the JRM corner this week, but I digress.

Allgaier had a rough go last week at Talladega Superspeedway. He was in a great position to win the race and had a great car, but bled his tank dry on a restart and ended up having to kick it in the garage. Fast forward to this week, and he yet again had arguably the best car at the track. He might have came home with second place, but that’s always much better than watching a checkered flag from the pits.

Justin Allgaier was a mix of frustrated (finishing second) but at least bad luck didn’t totally ruin his day like running out of gas last week at Talladega: pic.twitter.com/ico5dkEdku

As for Gragson, he ended up winning the Dash 4 Cash this week, walking away with a check of $100,000. Surely he’d have liked to have finished higher, but with his pockets a little heavier, something tells me he’s not too upset. I’m not sure what the bar scene is like in Delaware (if such a thing exists), but if I were Gragson, that’s where you would find me for a post-race interview.

Even though he came home with a top-five finish, I couldn’t leave Sam Mayer off this list. After winning stage one, Mayer led the rest of the field to the pits. However, when he left the stall, his crew chief called on the radio to nurse the car back to the stall — they knew that they didn’t tighten the left rear tire. Try as he might, Mayer couldn’t make it back to the pits before the tire gave way.

Issues for the Stage 1 winner @sam_mayer_ who loses a tire after a pit stop. pic.twitter.com/kMAS2AR0H9

Typically, this results in a four-race suspension for the crew chief and two crew members. Let it be known, though, that that doesn’t mean those crew members can’t compete in the Cup Series, as FOX Sports’ Bob Pockrass notes. Why is this important? Because JRM typically sources crew members from Hendrick Motorsports. Time will tell on what NASCAR’s decision is, but I’d be willing to bet that the conversation on pit road was not pleasant.

As much as I like him, Rajah Caruth has to be the biggest loser of the day. The young Xfinity driver is making some serious noise in the ARCA Menards Series, and it’s a safe bet to say that fans can expect to see him in the Xfinity Series sooner rather than later. Today was not his day, though. He was fighting his car to keep it on the track early, and after qualifying 15th, wound up watching the race from the garage after 50 laps in. The car became un-drivable, and right rear issues forced Caruth to call it a day.

It’s not exactly the way you want your first Dover start to go, but it can only be up from here for the talented young driver.

Some 🔥 pics of our @circlepay Chevrolet. I’ll be at the @MonsterMile statue at 10am tomorrow for a little if ya wanna come say hi. #teamchevy | @TeamAlphaPrime pic.twitter.com/ekbyjmIW1c

Even though Caruth didn’t have the day he’d have liked, he looked good doing it at least in this week’s Circle Pay sponsored Alpha Prime Racing No. 44 Chevy. I know last week I referenced ice cream as what I paired with the paint scheme, and even though it sounds like a broken record, I’m going to do it again.

I went broad with Baskin Robbins in general last week, but this week we’re going to narrow it down. I get “birthday cake” vibes from this one, and the way the wrap lines up with the body lines of the Xfinity Camaro just work so well — mainly on the hood.

Cowabunga! We’ve got a new driver added to the playoff mix. With his first win of 2022, Berry added himself to this year’s playoff tree. He joins Austin Hill, Ty Gibbs, AJ Allmendinger, Gragson and Brandon Jones as the current drivers eligible based off wins alone according to Jayski.com.

Like I said earlier, I’m a fan of green flag racing. I, for one, hate watching a race where half of it is under caution. It makes NASCAR races fall into the old “sleeping pill” stereotype, and it’s not good for the sport.

That being said, today was not that. I saw plenty of drivers using dirty air to their advantage, having to wheel the hell out of the car to keep it straight, and using lap traffic to their advantage. All of that plays into the question that I want to know as I watch every race: “Who’s going to be the better driver today?”

Today, that was Josh Berry. Next week, it might be some guy we’ve never even heard of. The point is, though, that green flag racing is good for the sport. Not every week can be some wreckfest — the smaller teams can’t handle the cost, and the fans would dwindle down after seeing the same cars spin out week in and week out.

On top of all of this, Dover is one of the best tracks on the NASCAR circuit, no matter how you slice it. I said the same thing about the new Atlanta Motor Speedway configuration, and I’ll say it again: it’s different, and that’s why people like it. Good race NASCAR, let’s do it again soon.

It’s finally here — Darlington Raceway. 200 miles of sleek, sexy throwback schemes that will make the mouth of any nostalgic race fan water. Officially titled the Mahindra ROXOR 200, next weekend’s race should provide for an interesting “Scheme of the Week” section. Gragson took home the win the last time the Xfinity Series came to town, and with two wins already under his belt in 2022, he’ll be hungry for number three. The green flag drops on Saturday, May 7 at 1:30 p.m. ET and will be broadcasted on FS1 and the Motor Racing Network.