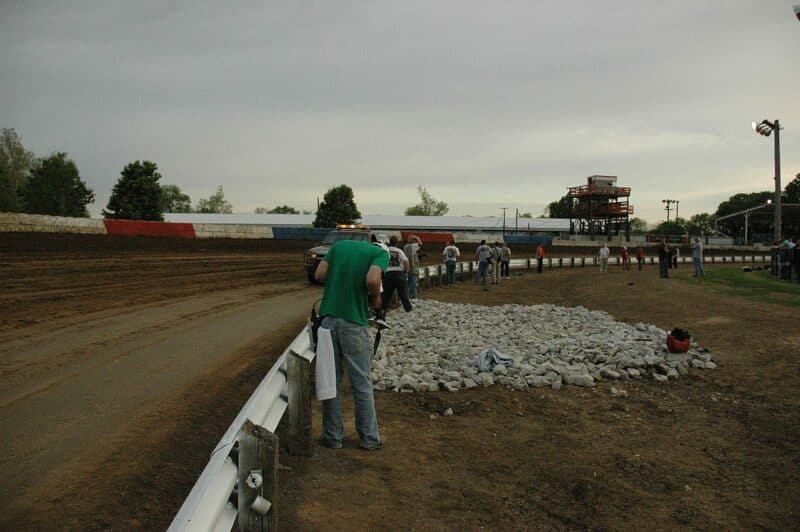 ONE: Does DirtVision Need to Get More Selective With Interviews?

Ryan Gustin’s heat race interview on Friday heard the driver tell DirtVision’s Hannah Newhouse that nobody wanted to be racing at Bristol and that the racing there sucked. Kyle Larson slammed World of Outlaws late model officials for penalizing him for being late to staging, remarking that such calls are why teams are leaving the WoO tour.

Even defending series runner-up Chris Madden got in on the action, letting loose that the redraw process the WoO uses to set the front rows for their feature races was stupid and did the strongest cars in the field no favors.

Listening to all of this criticism (and it came off harsher on-air then it does me writing about it), it had me wondering if DirtVision, the official outlet of the World Racing Group, didn’t need to start being more selective about the drivers they interview.

That’s a dangerous suggestion. I was covering NASCAR for Frontstretch in the pre “boys, have at it” era when secret fines and probation were a real thing for drivers that spoke out against that sanction, with the consequences being drivers forced to remain silent or present a face as vanilla as Jimmie Johnson. Stifling criticism and personality is a surefire way to make a bad PR situation worse.

But in the case of this weekend, especially in the case of Larson and Madden, it was hard not to feel like the Outlaws were just being piled on. Madden’s detesting the redraw procedures the Outlaws used is a point of discussion in big-time late model racing (by contrast, the competing Lucas Oil Late Model Dirt Series uses a straight up lineup for heat race winners to set their fields), but it’s also a constant, known before any cars show up for an Outlaws race.

Larson’s comments were even worse, coming off as a demand that the series treat him differently because he happened to be running double-duty at Bristol. Double duty means following double rulebooks, as I’ve already written on earlier this week. I still think Larson did the Outlaws raw riling the crowd up with his Friday rant.

Most striking about this episode though, and this where I get to the point of even suggesting that DirtVision think about getting selective about driver commentary, is that both Larson and Madden are not Outlaws regulars. They are both running “outlaw” schedules in 2022, picking and choosing races they want to run. If I’m the outlet of the Outlaws and have part-timers that aren’t even regulars with my series lashing out at my well-known procedures with no serious skin in the game, well, I’d think twice about providing a platform.

While the Bristol Bash wasn’t without its flaws, DirtVision and Outlaws officials were not the cause of that. Well, except for keeping Bristol on the schedule.

I took a trip to the Roaring Knob Motorsports Complex on Friday night, my first visit to the track and the first time in probably six years that I went to a short-track race with what I’d consider a lacking car count; my notebook counted 29 cars across five classes that evening. Those are obviously concerning numbers, though maybe not surprising when one considers the track is an easy drive from Lernerville, which hosted the All-Star Circuit of Champions the same night, and Bedford, which had a big-dollar super late race.

What really bothered me though, was in the case of multiple classes of cars there that had seven entries, the track opted to run heat races with four and three cars, respectively, before running the feature. Sorry guys, three-car features are a bore, much less heat races.

Yes, the entire point of a weekly racing program is a building crescendo to the feature, with a perfect night seeing heat races lead to a B-main to a feature, with car counts on track increasing as the night progresses. That gets undermined when the car count in an inconsequential heat race is so low (if the field is short, heat races matter very little) that it basically resembles hot laps with fewer cars on track.

From where I’m sitting, in an event where there’s fewer than 10 cars on premises for a given class, add five laps to their feature event and just run the feature. Granted, it’s not my money that’s paying for an extra five green-flag laps of wear and tear on the car, or shortening a race program. But for the money I did pay in admission Friday night, I’d have enjoyed a longer seven-car feature a lot more than two barebones heats.

Speaking of Bedford, I chose Roaring Knob over that track Friday simply because I hadn’t been to the Knob before, but man was I kicking myself for missing a Billy Winn Classic feature that lived up to the name “classic.” What a freaking race, even if Winchester’s hometown hero Trever Feathers faded late after leading the most laps.

A 50-lap race that went green the whole way, with comers and goers throughout the field. A diverse field that saw local ringers like Feathers go toe-to-toe with national heavy hitters including Port Royal LOLMDS winner Gregg Satterlee and Lucas Oil regulars Matt Cosner and Ross Robinson. And I don’t know who did the camera work for Flo on the evening, but they did very well to capture the action through an indefinite green-flag run.

Oh, and Satterlee is on fire.

.@GreggSatterlee’s on another level in Pennsylvania at this juncture 🔥

The Truth comes on late to lead the final 13 laps and win the $12K Billy Winn Classic at Bedford Fairgrounds.

For those with a Flo Racing subscription, this replay is worth a watch. The mid-atlantic late model scene has been stellar thus far in 2022.

My biggest takeaway from my first year on the dirt racing beat for Frontstretch last year is that the USAC Silver Crown Series may be the single best thing going on in American motorsports, and having watched the series’ 2022 opener Sunday from Terre Haute, my opinion on that hasn’t changed.

It doesn’t matter that outside of Justin Grant’s familiar NOS Energy colors I couldn’t identify a single car in the field. The machines that look antique racing long distances that provide the urgency of sprint car racing with the distance and race strategy of a longer asphalt race is one of the most unique forms of motorsport left. Plus, Bill Rose was in vintage form on the night and a surprise treat to watch.

Perhaps more notable than Silver Crown’s proven race product was that the race marked the debut of the renovated Terre Haute Action Track, which readers will remember was the site of Frontstretch’s 2021 Wreck of the Year courtesy of Brady Bacon.

Brady Bacon walked away from this ride at the Terre Haute Action Track. 😳😳😳 pic.twitter.com/Q06QIQdXyC

To the track’s credit, following that incident this offseason the track completely redid the walls in all four turns of the track, replacing the short concrete walls with taller metal barricades reminiscent of those used at Knoxville. Those walls fortunately were not tested during Sunday’s feature, though in the prelim action they served their purpose in preventing a repeat of 2021.

🚨 Hard hit for Chris Fetter who rolls his @USACNation Silver Crown car into the fence at @TerreHauteTrack. Fetter is out of the car. pic.twitter.com/ksRtwcfIqH

Though I will ask…WHY are the new Armco walls not painted in the track’s distinctive red, white and blue?! Missed opportunity.

Sharon Speedway hosted one of Frontstretch’s top-five races of 2021 a year ago, and while Saturday’s Buckeye Cup on the whole may not be a race of the year contender in 2022, the finish absolutely was.

Brent Marks appeared to have the race won, to a point that Flo Racing’s commentary booth was running down Marks’s career stats on the All-Star Circuit of Champions tour. His sixth win was on the books… until Cap Henry exited turn 4.

What more can you say? Sharon Speedway is a gem and it’s not over till it’s over.

It’s always sad to write stories like these, but it never stops. The latest track on the chopping block following the 2022 season is the Five Mile Point Speedway in lower New York, rumored to having been sold, with this season marking the last year for racing at the quarter-mile.

A public service I always hate to provide. “Make a point to get to the Point.”

Thanks for this edition of Frontstretch, it was well done hitting upon many good points, highlights, facts, and opinions. Keep up the good work

I pile on the previous Thanks, I’ve been enjoying the dirt articles this year!

Nobody asked Kyle Larson to double dip there. He chose to run both events. His Team left him down. Why they could not push the car to the staging area is baffling. Somebody does not know how to DELEGATE. As far as Madson. What’s wrong with having a fast car and passing people. Look what Larson did. Started last got to second then crashed. Stop being whiny. Race your car.