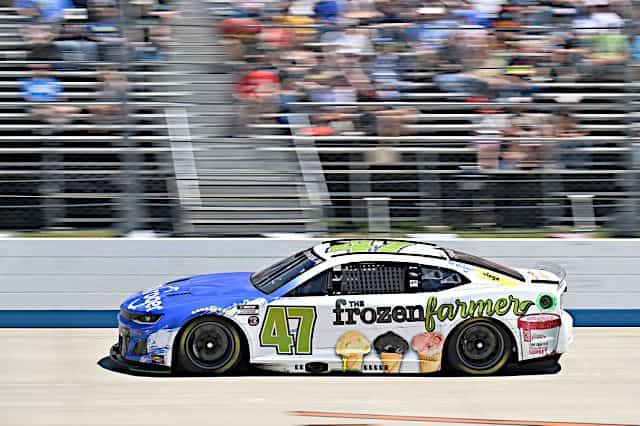 DOVER, Del. — Chase Elliott earned a much-needed win on Monday afternoon in the Drydene 400 at Dover Motor Speedway, but Ricky Stenhouse Jr. felt like a winner leaving the Monster Mile.

After a dismal start to the season, Stenhouse Jr. earned a second-place finish, his best career finish at Dover and best overall since Bristol Dirt of last season.

“We needed it, bad,” Stenhouse Jr. said on pit road post-race. “We’ve had good race cars and better race cars than I feel like what we’ve shown. Feels like all of our fast races we’ve had issues. Getting crashed at the speedways, we’ve had some engine issues. All in all, it was a solid day to be able to put this together.”

The runner-up result was Stenhouse’s second top 10 of the year and came at an opportune time. The No. 47 team entered the Monster Mile 31st in points, meaning even a win wouldn’t guarantee their admittance to the playoffs (must be top 30).

Ricky @StenhouseJr reflects on a runner-up finish for @JTGRacing, his first since Bristol Dirt last year and first top five ever @MonsterMile. pic.twitter.com/8mGXWloUUf

But Monday afternoon’s run was evident of Stenhouse’s theory: it’s been more circumstantial things that have held him back rather than raw speed.

“We’ve broke a driveshaft, we’ve had an engine break on us when we were running in the top 10 at Vegas, we had an engine break in practice at Phoenix which I feel like kind of hurt us for our setup and not really getting any track time,” he said. “And then the speedway races, I mean we were leading Daytona and got wrecked. Leading Atlanta, blew a tire, and we were really fast at Talladega and got caught up in that wreck. So there’s a lot of things that we can kind of look at and dissect and still feel good about. And it’s nice to finally put it all together.”

The Olive Brach, Mississippi native admitted that short tracks have been JTG’s Achilles heel this season, with finishes of 27th or worse at Phoenix, Richmond and Martinsville. In fact, Stenhouse’s past seven races leading into Dover had all been 27th or worse as well.

“Our season feels worse than what it is,” he said. “We’ve had three short tracks and have been really bad at those. We’re trying to come up with a new philosophy there, but we were excited to come to Dover. Always been a decent track for us and everything played out right there where we got cautions at the right time, kept our track position, had good pit stops, all that was kind of going into our favor.”

Nothing but smiles as Stenhouse does his season-best 2nd place at Monster Mile. 🏁#TeamNOS // #HighPeformanceEnergy pic.twitter.com/L4sAjxVUfp

Despite the good run, Stenhouse still faces a must-win scenario in order to qualify for the playoffs. Jumping from 31st to 27th is a welcome development, but a checkered flag and trophy is what he and the team are on the hunt for.

“No doubt you’ve got to win, and that’s why you’re a little frustrated finishing second knowing that one spot could really flip your season completely upside down in a good way,” he said. “We’ll still battle for that. [Crew chief] Brian Pattie is calling races to make sure we try and get that win that we need.”

“Obviously, being one spot better would really turn our season around. But all in all, I’m thrilled with what we got and hopefully we can build on this. We were looking to come in here and run top 15 because we’ve had such bad races and we didn’t want to ask for too much. We’ve got some really good tracks coming up that I feel like we can take this package and move forward and hopefully have some more good runs.”

At the checkered flag, @StenhouseJr brings the #47 @kroger #TheFrozenFarmer car home P2, great weekend for the 47 team. Thanks for following along, and thanks to Kroger and The Frozen Farmer for the support! pic.twitter.com/FRFnAIl8Od

Stenhouse knows what it takes to win in the Cup Series. The two-time superspeedway winner has tasted the winner’s champagne before, but hasn’t since the 2017 season. From a confidence standpoint, Dover did wonders for him.

“Yeah I for sure did [need this)],” he said. “I mean you can only hang your hat on so much as far as, ‘hey we got fast race cars and got nothing to show for it.’ You can only do that so many times. We’ve been working really hard and taking the information we can get and try and put together good races. All in all, it was a solid day for us. Car was a lot of fun to drive. It was tough. The cars are tough to drive and tough in traffic, but we were able to move around a lot more than I thought we would be coming into this race this weekend. I had a lot of fun.”

As the calendar turns to May, it’s never too early for Silly Season talk to start ramping up. While still a ways away, Stenhouse Jr. isn’t looking to move elsewhere and wants to remain at JTG Daugherty Racing.

“We’re working on it with [JTG co-owner] Tad [Geschickter]. Tad’s always working hard on the sponsorship side of things and once he gets all that secured, then we’ll move forward with my deal,” he said. “But I’m having, really, a lot of fun here and everybody’s working hard. You can look at the start of the season and be bummed, but I feel like we’ve got a lot of good things going and hopefully this is the start of it.”

Stenhouse and co. will look to build on their best finish of the season next weekend at Darlington Raceway for the Goodyear 400.