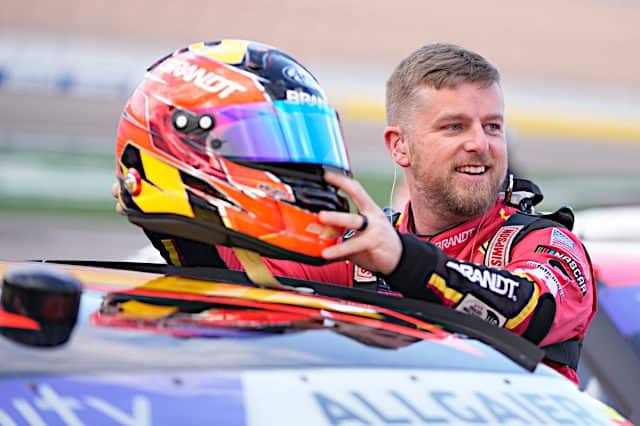 With 10 races in the books, there are 16 more races to go before the seven-race playoffs begin at Texas Motor Speedway on Sept. 24.

Austin Hill, Ty Gibbs, Noah Gragson, AJ Allmendinger, Brandon Jones and Josh Berry have punched their provisional ticket into the playoffs. But do they need to worry about more than 12 Xfinity regulars winning? Can even six more regulars win? The long answer is, yes, six more can win.

The short answer is no.

See also
Xfinity Breakdown: Slippin' and Slidin' at the Monster Mile
Of the drivers who have won races so far, Gibbs and Gragson are the only ones to win multiple times. Gibbs first visited the winner’s circle at Las Vegas Motor Speedway and followed up with wins at Atlanta Motor Speedway and Richmond Raceway. Gragson scored win number one of the season at Phoenix Raceway (March 12), and two weeks ago, he scored his second checkered flag, taking the checkered at Talladega Superspeedway (April 23).

It hasn’t been the smoothest of seasons for Gibbs, but he has displayed that his Joe Gibbs Racing Toyotas are up to task far more often than not. And Gragson is boom-or-bust, either finishing in the top five or 20th or worse each week. These guys are on point and poised to advance to the NASCAR Cup Series in 2023. I’d expect both to win many more races before the regular season concludes.

Then, there’s the outlier of the winners so far: Allmendinger. Why is he an outlier? Kaulig Racing has been fast but has lacked the speed to dominate races in 2022. That isn’t out of the ordinary for Allmendinger, though, as through 10 races last season, he had only led 99 laps compared to this season’s 137.

Compared to JGR and JR Motorsports, Kaulig is a step behind, but a close step. On the flip side, Allmendinger has finished inside the top 10 in all 10 races thus far. No one else has more than seven.

That leaves Hill, Jones and Berry as the other winners. Hill’s win at Daytona International Speedway isn’t a fluke; the rookie will capture plenty more throughout his career. But after leaving Circuit of the Americas following a second straight runner-up performance, Hill and his No. 21 Richard Childress Racing team have more or less been at the back end of the front-running cars.

Jones’ season has been up and down, but he has Toyota power under the hood. He looks more confident, similar to his 2020 self. Then there’s Berry, the most recent winner this past weekend at Dover Motor Speedway. JRM has been looking strong at every race this season with Berry quietly being the most consistent. Bad luck at Atlanta and Martinsville Speedway has kept him from scoring another two top 10s on top of the five he already has.


Gibbs, Gragson, Allmendinger, Jones and Berry have strong potential to win again, with Hill potentially joining them if the team regroups after a minor slump.

As for the front-running drivers who haven’t won, their chances to win their way into the playoffs are shrinking by the race. Justin Allgaier, Sam Mayer, Riley Herbst, Landon Cassill, Daniel Hemric and Sheldon Creed are the six remaining powerhouse team drivers yet to win. And I haven’t yet mentioned Ryan Sieg, who convincingly sits eighth in the standings, some 45 points above the cutoff line.

This answer may come as a surprise, but Allgaier is the only real lock to win a race out of this group. That may seem harsh, but experience and excellent equipment are on Allgaier’s side compared to the others. Yes, JRM teammate Mayer is knocking on the door for his first career win, but he doesn’t have the plethora of experiences, good and bad, to draw from as Allgaier does.

Not only that, but looking at past history, Allgaier has solid opportunities to cash in well before the Fourth of July. Darlington Raceway is where he most recently won, and Portland International Raceway is similar to Watkins Glen International, which is his best road course of those he has more than two starts at. Portland has long straights and a technical esses complex, much like The Glen. Then, the concrete 1.333-mile Nashville Superspeedway is two weeks after Portland, and Allgaier loves concrete tracks.

Mayer and his team need to eliminate mistakes if they want to visit victory lane this season before the playoffs. The team has speed. Like him, all three of his teammates have run up front and shown the capability of maneuvering through the field with ease. Now, Mayer needs to qualify well and stay up front.

Allmendinger’s Kaulig teammates, Cassill and Hemric, sit 11th and 12th in points, respectively. Their biggest issue hasn’t been speed but mechanical failures and unfortunate luck. When you subtract a blown engine at Auto Club Speedway and a broken gear at COTA, Cassill has eight top 15 finishes and five top 10s. Crashes at Daytona, Atlanta and Talladega have left Hemric out of the loop, then add to that a poor showing at COTA.

Like Allmendinger, Cassill and Hemric have shown speed but remain a step behind JGR and JRM.

The final two front runners are Herbst and Creed. Herbst has improved his point position year-to-year by six, going from 15th to ninth. While his finishing position has dramatically improved, Herbst is still missing that final piece or timely strategy call to work in his favor. As for Creed, he’s 14th in points and is having more or less a disappointing rookie outing in RCR’s No. 2 Chevrolet.

Sieg and his RSS Racing crew are the leading candidates for most improved driver and team. At Dover, he had to start at the rear of the field, but by race’s end, he was 10th. Sieg has scored seven top 10s, already matching his 2021 totals. While RSS is not a top-performing team, Sieg has proven he is at the very least a leading midfield contender.

Will there be six more Xfinity regulars to score a win before the end of the regular season? It’s doubtful. Considering the strength Gibbs and Gragson have shown, they could easily score three more wins apiece. Before we even get to the playoffs, there are four more road courses. I think you can pencil Allmendinger in for three, if not all four of those victories. That’s 10 of the 16 remaining races right off the list.

Allgaier is going to win one of the rest – I have no doubt of that. But the others? It’s tough to say. And that doesn’t even account for the possibility of a Cup or Camping World Truck Series regular coming in and winning a race. Oh, and by the way, what if a late-race caution allows a team to put a saved set of fresh tires on? What if they drive up and win? What if it’s an Our Motorsports or another midfield team who steals that race?

Pencil in 10 of the next 16 races as victories for Gibbs, Gragson, or Allmendinger. The remaining six is anyone’s guess, but expect multiple drivers making the playoffs based on points alone. With the way the standings are shaking out for Sieg and drivers on the cutline like Cassill, Hemric, Creed, even Anthony Alfredo and Brandon Brown, it’s almost just as exciting to watch their point totals fluctuate each week as having available playoff positions tick away by virtue of a new driver reaching victory lane.