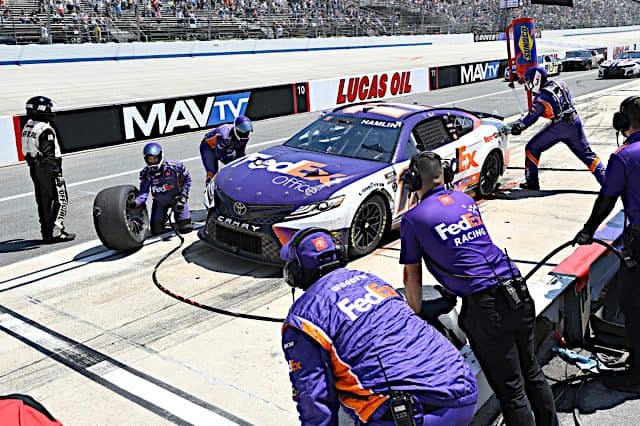 The NASCAR Cup Series crew chiefs for Denny Hamlin and AJ Allmendinger have been suspended for four races after both teams suffered a lost wheel during Monday’s (May 2) Cup race at Dover Motor Speedway.

Chris Gabehart of Joe Gibbs Racing and Matt Swiderski of Kaulig Racing will both be prohibited from competing at any of the next four Cup events.

The jackman and front tire changer of the No. 11 team, Derrell Edwards and Blake Houston, will also suffer the suspension. Likewise, the same crew members of the No. 16 team, Jonthan Willard and Keiston France, have also been penalized.

The events in the suspension include the NASCAR All-Star Race at Texas Motor Speedway.

No monetary fine or point reduction has been issued to either team.

Hamlin finished 21st at Dover on Monday, while Allmendinger ended his day in 33rd.

In the Xfinity Series, crew chief Taylor Moyer of the No. 1 JR Motorsports Chevrolet driven by Sam Mayer has also been suspended for four events after a wheel loss during Saturday’s race at Dover. Rear tire changer Orane Ossowski and jackman Markus Pierce-Brewster were included in the suspension.

Finally, the No. 16 Kaulig Racing Xfinity car, also driven by Allmendinger, has been penalized for an unsecured lug nut that was found post-race. Crew chief Bruce Schlicker has been fined $5,000.

4 races is a big price to pay.