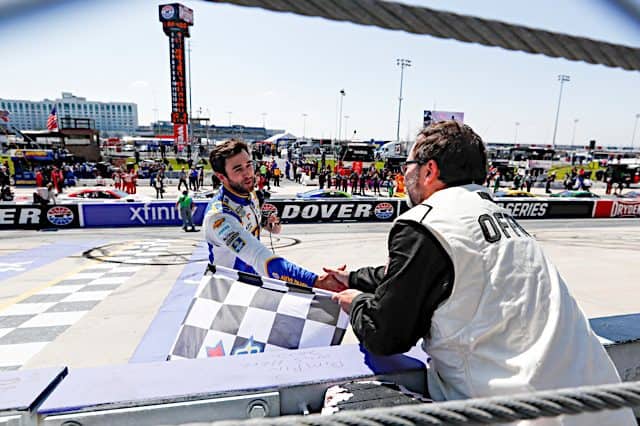 Chase Elliott entered this weekend as the Cup Series point leader, but there were many questions surrounding him at the start of the season; he had just one top-five finish in the first 10 races of 2022, he hadn’t won on an oval since winning the championship at Phoenix Raceway in 2020, and he was on a 26-race winless streak, the longest of his career.

He put all of those questions to bed and then some on Monday afternoon (May 2).

Elliott took the lead from Ross Chastain on the final restart with 53 laps to go, and he cruised to the win after running in the top five for the majority of the day. And, with Ryan Blaney finishing 26th, Elliott now has a 50-point lead in the regular season championship heading into next weekend’s event at Darlington Raceway.

It’s been a feast or famine season for Joe Gibbs Racing in the Cup Series, but all of their cars showed up to play at Dover. Christopher Bell came back from a loose wheel to finish fourth, and Martin Truex Jr. was on pace to finish either third or fourth until a last-lap collision with Chastain left him with a 12th-place finish.

With 100 laps to go, it seemed to be shaping up to be Kyle Busch’s day ¯ and on his birthday, just like last year at Kansas Speedway. He led the most laps of any driver in the race (103), also marking the first time since the 2020 Bristol Night Race that he’s led triple digits in a Cup race.

Busch dominated stage 2 and the beginning of the final stage, but when he went to pit under green for the final time, a caution for AJ Allmendinger’s runaway wheel left Busch and second-place Alex Bowman trapped one lap down; Busch could only muster a seventh-place finish by the time the checkered flag flew.

Denny Hamlin’s miserable 2022 season continues, as his lone top-10 finish in 11 races this year remains his win at Richmond Raceway in April. But unlike most of Hamlin’s poor finishes this year, he was one of the fastest cars at Dover this weekend. He led 55 of the 78 laps before the race was halted for weather on Sunday, and led another 12 laps on Monday to win stage 1.

Things fell apart from there, as Hamlin lost a wheel exiting pit road after stage 1. The penalty dropped him to the back of the field, but Hamlin managed to rebound nicely from the bobble, and he had clawed his way back to fourth place in stage 2 before a crash with Cody Ware on lap 243 took him out of contention for good. It’s another disappointing finish for Hamlin and the No. 11 team, but the speed they showed is certainly a step in the right direction.

The biggest off-track news last week was Hamlin’s tweet poking fun at Kyle Larson changing lanes and accidently crashing Kurt Busch on the final lap at Talladega Superspeedway. As Larson is half-Japanese, the tweet in question used a scene from Family Guy where an Asian driver makes an erratic lane change across a highway before causing a huge crash.

By the end of the day, Hamlin deleted the tweet and issued a public apology on Twitter. A few days later, NASCAR announced that Hamlin was ordered to complete sensitivity training for the post.

All of these incidents follow Larson’s infamous use of a racial slur on iRacing in April 2020.

With all of these incidents in the past two years, Hamlin’s sensitivity training punishment is NASCAR sending a message. NASCAR wants its drivers to be positive role models and ambassadors for the sport, and this tells the drivers what won’t be tolerated in the future.

Chris Buescher was the big surprise on Saturday, as he held off Hamlin, Elliott and Larson to win his first Cup Series pole in his 233rd career start. The pole run proved to be no fluke, as Buescher led the first 18 laps and ran in the top 10 almost all day. When the checkered flag waved, Buescher crossed the line in eighth for his third top 10 of the season and his best career finish at Dover.

Bowman entered this weekend as the defending winner at Dover, as he led a 1-2-3-4 Hendrick Motorsports charge last May. Things were looking up for him this year as well, as he found himself running second behind Kyle Busch for the first half of the final stage. But when Bowman was trapped a lap down during the final round of green flag pit stops, his chances at the win were dashed. Despite this, he made a solid rebound from 16th to finish fifth in the final 70 laps of the race.

In the context of the 2022 season, no one has been a bigger surprise than Chastain and Trackhouse Racing. He scored his first win at Circuit of the Americas, picked up another on the final lap at Talladega, and has now dominated to the tune of seven top-five finishes in the first 11 races.

Chastain’s greatest strength in 2022 has been his versatility, as he has competed for wins and top-five finishes on road courses, superspeedways, intermediate tracks and short tracks this season. And when the field hit the high-banked 1-mile oval in Dover, Chastain was once again one of the best cars in the field, leading 86 laps for a solid third-place finish.

The race turned upside down on lap 325. The leaders were entering their pit window, and the lead lap cars began their service under green flag conditions with around 80 laps to go.

One of the biggest surprises was that leader Kyle Busch and second-place Bowman were among the first of the lead lap cars to pit, and this strategy backfired horribly, as a caution for Allmendinger’s wheel trapped them one lap down and out of winning contention.

Before pit stops began, Busch and Bowman had gapped third place by a few seconds, as Truex, Chastain, Ricky Stenhouse Jr. and Elliott were unable to make up much ground on the lead duo. But with the top two out of the picture, the entire complexion of the race changed.

Chastain jumped Truex on pit road under caution to take the lead. He maintained the lead on the lap 331 restart, but Elliott got around Truex to take second place. And on the final restart with 53 laps to go, Elliott and Stenhouse were able to clear Chastain, with Elliott gapping Stenhouse by more than 2 seconds when he took the checkered flag.

Next weekend will see the Cup series return to Darlington Raceway for a 400-mile, 293-lap event on Sunday, May 8.

Next weekend’s race will mark the second straight year that Throwback Weekend will be held on the Mother’s Day race at Darlington. In addition to the variety of throwback paint schemes that will dot the track on Sunday, the FOX booth will also feature three special guest stars: Richard Petty in stage 1, Bobby Labonte in stage 2 and Bill Elliott in the final stage.

The throwback festivities aren’t the only things to be excited about for next weekend, however, as there are several storylines heading into next weekend.

Will Chastain continue his hot start with more domination at Darlington? Will defending Southern 500 winner Hamlin challenge for the win and finally record another good finish? Will point leader Elliott make it back-to-back wins with his dad in the booth? Will Larson get out of his funk and score his first win at a track that has eluded him for years? Tune in on Sunday to find out.

How … bright is Dover’s future?

With poor attendance, lackluster racing and an ownership change, there were several questions surrounding Dover’s future on the NASCAR schedule beyond 2022. With all of that in mind, this weekend’s Cup race went about as well as it could have.

The race was marketed extremely well by Speedway Motorsports, Inc., and Sunday had one of the best turnouts at Dover in years. The packed crowd unfortunately saw just 78 laps of racing before the race was postponed to Monday, but the Monday crowd was also solid considering the circumstances of the rainout.

Finally, the race itself had action. It was a competitive race out front, as no driver led more than 103 laps in a 400-lap race. In addition, there were eight on-track passes for the lead; last year’s Cup race at Dover saw a single pass for the lead on lap 17. Beyond that, tire wear was a major factor and the rubber on the track gave drivers the ability to run different lines.

When put together, it was a race that featured comers-and-goers throughout the field that had the ability to pass and run different grooves around the racetrack.

Dover isn’t out of the woods until the 2023 schedule is announced later in the year. But with the great racing and the high fan turnout on Sunday, it would now be a shock to see Dover left off the 2023 schedule.

Hamlin forgot the number one rule when involved in an incident at Dover: Stay High because the track is self-cleaning and the cars involved head to the bottom. If he had stayed high he would have missed the spinning car.

I guess I missed all the passing….it appeared to be single file to me as the (don’t say it) issues on short tracks seem to be piling up. Putting some adjustment back into the cars would be a great help. Did Chocolate Myers ghost write this article?

There was plenty of passing. Good amount of lead changes and comers and goers all day. Sure it was relatively hard to pass, but definitely doable.