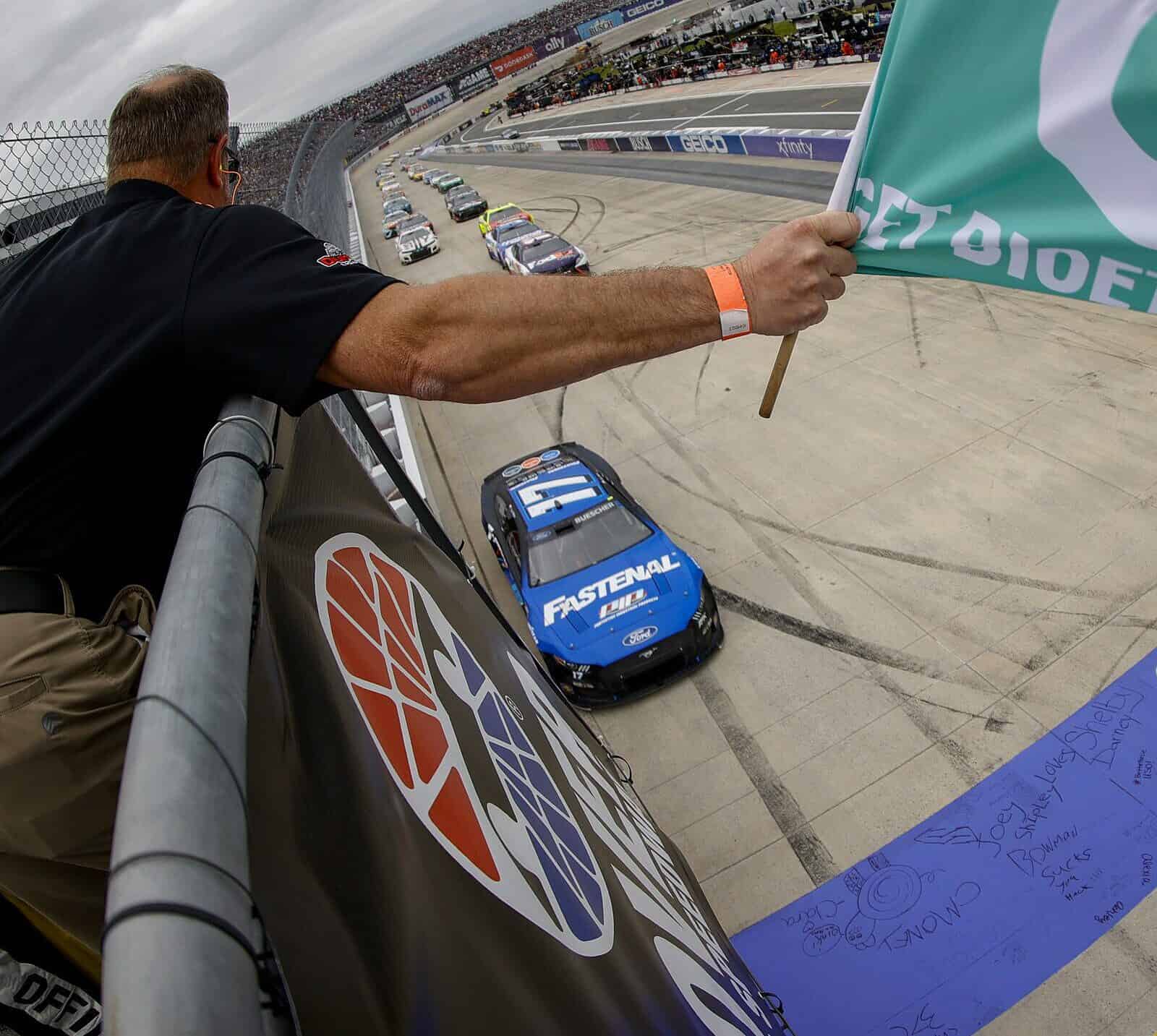 It was not a moment that Chris Buescher, nor anyone who’s followed NASCAR for the last decade, was used to.

Watching Buescher watch other NASCAR Cup Series drivers attempt to knock him off the pole position in qualifying.

But that was the case Saturday (April 30) at Dover Motor Speedway, as the RFK Racing driver stood next to his No. 17 Ford, waiting.

Waiting to see if he would claim not just the first pole of his NASCAR Cup career, but his first NASCAR pole period.

It would also be RFK Racing’s first Cup pole on a non-superspeedway track since 2013. Back then, Carl Edwards and Greg Biffle were still Roush drivers and Buescher was just a team development driver splitting time between the Xfinity Series and the ARCA Menards Series.

So, six years after Buescher’s lone Cup win to date and after 232 Cup starts, Buescher had a target on his back.

“There was some pretty awesome emotion from it,” Buescher told reporters Wednesday (May 4). “We waited around for a really long time (in the first round) and realized right then that our lap was gonna hold up pretty good. I stayed in the car because I was too nervous to do anything different. I was like, ‘OK, I put up a good lap. I’ll stay in the car and we’ll see how the rest of the field goes and, if need be, we can go back to the hauler.’ But I ended up staying in it through both groups and right up to our next lap.”

After his final qualifying run, the No. 17 team was “watching, paying attention” to the rest of the cars making a run, “but didn’t turn the SMT (data) on.

“We were sitting there talking about it. If we had SMT and we were sitting there watching, I don’t know if that would have made the nerves better or worse. If you’re sitting there and knew that you had him off of (Turn) 2, but they gained into three and see if you can get ‘em off of four. It was a little easier for us to just watch the monitor up top and see them come across the line and watch the times.”

Eventually, Buescher started from the pole and led the first 18 laps of Sunday’s Cup race at the “Monster Mile.”

When the race resumed Monday after a rain postponement, Buescher placed eighth. That was after finishing eighth and ninth in the first two stages.

Buescher, 29, now has three tops 10s this year – plus his win in a Daytona 500 qualifying race, which was only the second in RFK’s history (Brad Keselowski got No. 3 later that night).

This is the fastest that Buescher has reached the mark of three tops 10s in his Cup career. The previous best was race No. 12 in 2021.

Why is any of this really notable?

Because in its first season with Keselowski as a co-owner / driver, it’s tangible proof things may be turning around for a team that has won only two Cup races since 2014.

“We’ve had splashes of really good runs through the last many years and we’ve been close in a lot of races, just trying to find consistency and really find a home base to land and build from,” Buescher said. “I think something that sticks out to me is it’s always difficult to go two or three years and make a complete change and try to build that chemistry back up and build that comfort or that confidence in everybody to be able to go have that success.

“It’s so hard to do that instantly, so it’s always taken a little bit of time to get that back going and always with a little bit of uncertainty with what next year may bring. I feel good about where we’re at at RFK right now. …  There’s a lot of potential here, a ton of potential, and I think with Brad coming in it’s opened a lot of people’s eyes and made them see some differences.”

The first time this season Buescher felt good about his and RFK’s prospects in the Keselowski era came at Phoenix Raceway in March.

Buescher, who had never finished better than 16th in 12 starts on the 1-mile track, crossed the finish line in 10th.

Meanwhile, Keselowski has one win and 11 tops fives there, including six in a row at one point.

“I went down there and tested (in the winter) and was able to lean on Brad for a lot of advice and what he’s looking for and what he’s been successful with there at Phoenix in the past and was able to apply that and come home with a 10th-place run there at the beginning of the year,” Buescher said. “That was just one of the first cases where it was like, ‘Man, this is gonna be really helpful for me.’”

It was Graves who Buescher was paired with when he won RFK Racing’s last NASCAR title in the Xfinity Series in 2015.

Though that was seven years ago, Buescher believes that experience is still “worth something” in 2022.

“We’ve been able to get back in the swing of things and both of us have a whole lot more experience now than we did at that point,” Buescher said. “But a lot of the same characteristics and same nuances with each other are still there – a lot of the same positives are there that we’re able to work around and understand each other quickly.

“Neither one of us are … excitable or high-emotion people, but I think we can communicate very quickly and clearly because of that. So, I think there’s a certain amount of it that has definitely come into play and it’s starting to click here as we get into the first third of the season. I think it’s going to continue to get stronger as we all work as an entire team together and as the entire group is getting more comfortable with each other and figuring out what everyone needs and what we can all accomplish together, so there’s something to it and we’re gonna keep building on it to make sure there’s more of it as we keep going.”

Hopefully, Buescher’s next big moment won’t take as long to materialize as this one.

2022 is Daniel McFadin’s ninth year covering NASCAR, with six years spent at NBC Sports. This is his second year writing columns for Frontstretch. His columns won third place in the National Motorsports Press Association awards for 2021. His work can also be found at SpeedSport.com and FanBuzz.com. And you can hear more from him on his podcast.