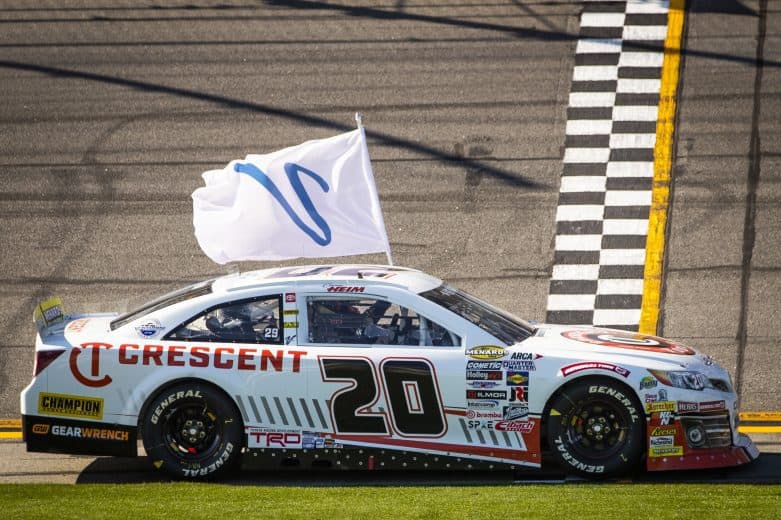 Driving the No. 55 for Mike Curb, Kevin Swindell led every lap en route to victory in the 2012 ARCA race at Chicagoland Speedway.

Fast forward to the 2020 ARCA season finale at Kansas Speedway and Corey Heim picked up his first ARCA win driving the No. 12 for Andy Hillenburg.

The list of NASCAR drivers who have driven for Venturini in ARCA competition is astounding.

“It is a large list,” Venturini co-owner Billy Venturini told Frontstretch. “When you look at the guys who have gone through our program and made it to Cup, it is a who’s who list of people. Joey Logano, Ryan Blaney, Erik Jones, Daniel Suarez, Bubba Wallace, Justin Haley, Todd Gilliland, and Harrison Burton all have come through here. It is an awfully long list of people I have worked with, and they are all so talented drivers. Joey Logano is one of the best drivers, if not the best, in the Cup Series.”

Logano won twice in his four-race ARCA career, all driving for Venturini. Logano also finished second at both Talladega Superspeedway and Daytona International Speedway. He won at Rockingham Speedway and Pocono Raceway.

“Those were big moments for us because Joey was a highly touted talent,” Venturini said. “It was at the beginning of our race team. We were not an established powerhouse team like we are now. Getting the opportunity to work with him was a big moment for us and we capitalized on it.”

Yes, the Venturini family participated in ARCA before Logano’s triumphs, but his stint with the team helped the team morph from a grassroots team to a driver development team.

“When we started with the development deal, it was during the conversion that Cup was having with the COT [Car of Tomorrow],” Venturini said. “So, we had access to a lot of good equipment. We got some good racecars from Joe Gibbs Racing and some other teams. We also brokered some deals to help offset the cost for our team. Bought a lot of racecars, sold some, and was able to reduce our investment with the development deal.

“Joey Logano ran for us at the beginning of our development program,” he continued. “Joey was a big part of it and so was J.D. Gibbs. J.D. and I were friends, we raced legends cars together and he was instrumental in making sure Joey got here. Joey won twice too so that was cool.”

Once Venturini became a driver development program, it continued its successes. Christian Eckes won the 2019 ARCA championship. The team is also the class of the ARCA field at superspeedways, including five straight victories at Daytona.

Eckes, Chandler Smith, and Heim are all three recent Venturini drivers who now compete in the NASCAR Camping World Truck Series. All three started their Truck tenures with Kyle Busch Motorsports. Venturini praised KBM saying, “KBM is a wonderful team and we’re happy to send our drivers there.”

The KBM duo of Heim and Smith battled for the Truck win at Atlanta Motor Speedway, with Heim winning for the first time in his Truck career.

It was a proud moment for Venturini.

“I love seeing my guys run well. What I liked about that race was he and Chandler raced for the win. Two of my kids battled for the win so it was a cool moment for us.”

I’ve got some bad ass racers in the truck series right now. @CoreyHeim_ @CSmithDrive @christianeckes Proud of all them.

Venturini has more youngsters coming into its stable. Conner Jones and Jake Finch made their first ARCA Menards Series East races at Dover Motor Speedway driving for the team. Jonathan Shafer made his East debut.

Venturini was pleased with the trio’s performances.

“They all ran very well,” he said. “If Connor restarted with more efficiency, I think he could have won that race. He had good speed but was a little slow on restarts, which we deal with that when someone is inexperienced. Jake and Jonathan had similar races. They drove well and had more speed than it showed in the finish. Both were good at the end of the race. They both struggled with the art of passing in these cars. It was Jonathan’s first time in an ARCA car and Jake’s second, with his first at a half-mile. All that was to be expected and all their performances were good. They all have a lot of potential and good things to come.”

Overall, Venturini attests the success of his team to his employees and the team’s plan to grow these up-and-coming drivers into successful ARCA drivers who can then succeed in NASCAR.

“We have a solid development program,” Venturini said. “We are developing these drivers not just on the track but also the off-track stuff like film study, reading, breaking down the races with each other. It takes a lot of tutelage that goes into being a good driver on our team. We have a lot of experienced people here. That is something I pride myself on – getting information to the drivers that they do not have due to their inexperience.”

Rest assured, the list of Venturini drivers who compete in NASCAR will continue to grow as the team develops drivers in ARCA.

The Venturini family has created quite a niche as part of the Toyota feeder system. Well deserved success for their long time efforts as drivers and owners