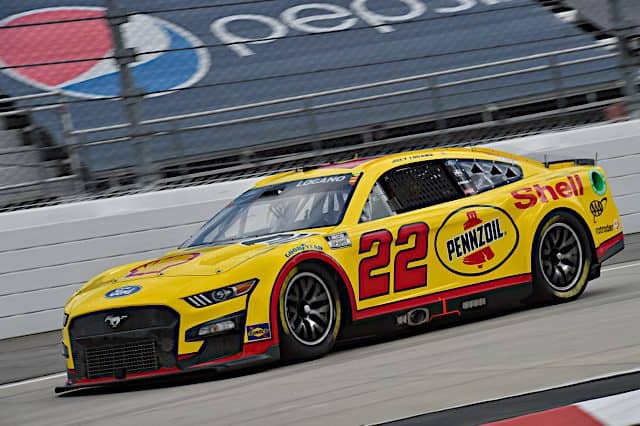 While there were a lot of compelling storylines to come out of Sunday’s (May 1) race at Dover Motor Speedway, one of the biggest mysteries to come out of the race was what happened to the Team Penske cars on Sunday. Aside from Ryan Blaney winning a stage, the Penske cars struggled mightily, including former NASCAR Cup Series champion Joey Logano who was never really near the front and teammate Austin Cindric didn’t finish the event after a crash ended his day early.

It was a bit alarming for Team Penske fans that as soon as Blaney lost track position he wasn’t able to work his way through the field and ended up finishing 26th, three laps down. That got us thinking: With the lack of speed that the team showed on Sunday, is it possible that Team Penske could have a car miss the playoffs?

Anthony Damcott and Clayton Caldwell give their thoughts on the topic.

Team Penske Should Not Be Panicking

Admittedly, this is not the same Team Penske we saw last year. For obvious starters, it has a completely different driver in the No. 2 this year with Cindric replacing Brad Keselowski. But its performance is lower than expected, to say the least, this far into the season. However, we are still just 11 races into the 2022 season, and we haven’t even hit the summer stretch yet.

It’s easy for columns like this to point most of the blame to the Next Gen car for the team’s struggles, and I do think that adjusting to a new car is part of why they’ve had some poor runs, but there are other reasons that could be the reason for their struggles.  The team will find its footing.

It’s not like the Team Penske cars haven’t shown speed this season. Cindric has the team’s only points win so far this season, but what better place to win at than the Daytona 500?  He also won the pole for the very next race at Auto Club Speedway.  Logano won the Busch Light Clash at the Los Angeles Memorial Coliseum and was three-quarters of a lap away from winning his duel race at Daytona International Speedway before crashing.

All three drivers have had success at different points this year, and the only thing hindering them from all making the playoffs is a win from Blaney and Logano. Yes, Cindric is the lowest ranked driver in the points, running 18th, but he is also working through some growing pains as a rookie. He is 93 points ahead of 31st place Harrison Burton, who is also going through some growing pains as a rookie, so the danger of him falling outside of the top 30 is very slim unless he has an ultra-poor string of runs over the summer.

This season has seen a boatload of different winners, old and new.  The only multi-time winners in the series currently are Ross Chastain and William Byron. If Logano and Blaney win, they will automatically be in the playoffs based on their top-10 points runs now (if they can hold it throughout the summer). If the series does surpass 16 winners, Blaney and Logano have the performance to stay in the top 16, and all Cindric needs is another win to solidify his spot in the playoffs.

Honestly, if Blaney keeps up his performance, he may not even need to win.  He is 50 points behind regular season point leader Chase Elliott, and if he can keep his good runs going and Elliott catches some bad luck, Blaney could be in a great spot to be the regular season champion and earn an automatic berth into the playoffs, even without a win.

It was just unlucky that all three drivers happened to have a problem at Dover, but even so, Blaney won stage two of the race, so it wasn’t even like they all just ran poorly all day. Unfortunate breaks and issues out of their control put them back in the running order.  But one race should not define how the organization, as a whole, is doing.  Now, if Blaney and Logano still haven’t won halfway through the season, AND, they, as well as Cindric are slipping lower and lower down the point standings, then I’d sound the alarm bell, but the way they’re running now, there should be no reason for any of the three drivers to panic about missing the playoffs. -Anthony Damcott

Did You All Watch Dover?

That is the question I present to you today. I know Dover is a unique track that the Cup Series won’t visit again this season, but if you’re a Team Penske fan you cannot not be alarmed after what transpired on Sunday. Especially if you’re a fan of Logano. We’ll get to Logano in a second. Let’s talk about the question at hand first.

Setting Logano aside means you have to look at the other two Team Penske cars and it’s a stretch to think either one would miss the playoffs. Blaney is currently second in the standings and, barring a major setback, he should have no issues making the playoffs.

While Cindric’s 2022 season hasn’t had the consistency the team had hoped for, his Daytona 500 victory virtually locks him into the playoffs. As long as there are not more than 16 winners in the first 26 races, he will be fine. Plus, Cindric’s road racing ability should bode well for his points total when we get to those tracks a little later on in the regular season. They are in good shape to be one of the 16 teams competing for a championship come September.

Logano however, may be a different story.

The No. 22 car’s performance on Sunday was so poor that it made you wonder how deep the problems on that team really go.

There were times you looked up on Sunday and wondered, “did he speed on pit road?” “Did he have some kind of penalty?”

Fans who are used to seeing Logano perform so consistently over the years must have thought something was up. Usually, the No. 22 car has a ton of speed. Dover was a different story. The team missed the setup badly. Logano’s previous performances at Dover led you to believe that a decent day was ahead on Sunday. He has 15 career top-10 finishes at the “Monster Mile” in 25 previous starts and most of those came driving for Roger Penske.

Instead, the performance on Sunday throws up major red flags about the team.

He finished 29th, four laps down. Almost impossible to believe if you didn’t witness it.

After Sunday’s disaster at Dover, Logano sits ninth in the standings. Ninth in and of itself is very respectable, but considering Logano was third just two races ago shows just how tight things are in the standings and how much things can change in two races.

Remember we are just 11 races into the season, 15 races are left until the playoffs begin. We are not even halfway through the regular season yet. A lot can change. For example, entering Talladega Logano had a 91-point cushion over 16th in the standings. Over the last two races he has lost 24 points to 16th. Things can change fast and if you don’t have speed to make up for bad luck and mistakes, it will equal disaster.

While Darlington is another unique track on the schedule it should provide a little insight into what the rest of the season may look like. With the new car this year, teams have been working all season to take what they’ve learned and have begun to implement it into their racecars. The middle part of this season will show what teams are going in the right direction and what teams have some work to do.

If the No. 22 car runs like it did at Dover that gap to 16th will shrink fast. You can also forget about them winning a race if things don’t improve soon. The margin for error with this car is very small and closing the speed gap is going to be harder than people think it is. With other teams running more consistent and some others trending in the right direction, the No. 22 car will fall short of its goal of making the playoffs. – Clayton Caldwell