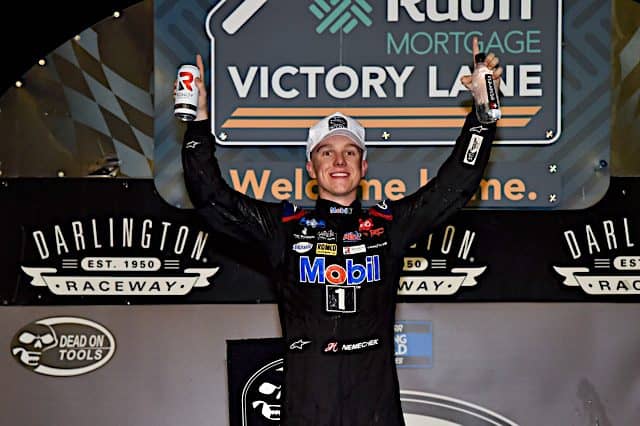 Faced with a final overtime restart, John Hunter Nemechek held off Carson Hocevar to score his 12th career NASCAR Camping World Truck Series victory, his first of the 2022 season and his first at Darlington Raceway in Friday night’s (May 6) Dead On Tools 200.

Before this race, Nemechek’s last Truck Series win had come at Pocono Raceway in June 2021. But a steady performance during the final stage ended his 15-race winless streak, giving him four straight top-five finishes after beginning the season with three straight results outside the top 20.

How did JHN conquer the Lady in Black for the first time in his Truck career?

“No Sheldon Creed,” Nemechek joked on the frontstretch after the race. “Just a huge shoutout to all the guys that work on this No. 4 KBM Toyota Tundra. Everyone that puts their heart and soul into what’s going on is huge. So, just thank you to everyone. Thank you to the fans. Heck yeah, awesome crowd.”

For the second race in a row, Hocevar came up one spot short in second place. He tied his best finish in the series, recording back-to-back top five finishes for the first time in his Truck career.

“I thought I had a shot, it just depended on fourth getting to my right rear and with Ross [Chastain] being there, I took the front row and had a decent shot, came to the white flag and my motor died for a split second and then he was gone,” Hocevar said. “I think I would’ve had a shot, just because I was better in [turns] 1 and 2 it felt like, and I could at least maintain. I knew he was going to run the top, so I was Carl Edwards-ing that thing in 3 and 4. I wasn’t going to lift until I saw God or at least I saw [Nemechek] five car lengths back in my rearview mirror.”

Majeski’s ThorSport teammate Matt Crafton initially crossed the line in fifth place, but his truck was disqualified for being too low in the front. With his DQ, Parker Kligerman leapfrogged into a top five finish in fifth.

Ryan Preece finished sixth in his part-time schedule, while Zane Smith overcame early handling issues to finish seventh. Tyler Ankrum scored his second top 10 of the season with an eighth, while Todd Bodine finished ninth for his first 10 in the series since 2012. And by virtue of Crafton’s DQ, Matt DiBenedetto inherited tenth for his third top 10 finish of the season.

Nemechek entered the race as the odds-on favorite, as he was fastest truck in practice and won the pole by more than four tenths of a second. That’s exactly how the race began, as Nemechek had jumped out to a one-second lead by lap 6.

The first break in the action came on lap 7 for a spin involving teammates Josh Reaume and Akinori Ogata. When the race resumed on lap 13, Zane Smith held even with Nemechek on the restart before taking the lead at the start-finish line. Smith then cruised to a comfortable lead until a Lawless Alan spin on lap 20 brought out the caution for the second time.

The caution saw split strategy; Nemechek, Corey Heim, Chandler Smith and seven others stayed on the track while Zane Smith and the other leaders decided to pit for tires.

Nemechek held on to the lead until lap 39, but his old tires were no match for a hard-charging Kligerman and his fresh rubber. Kligerman went on to win stage one; Nemechek faded to sixth.

During the stage one caution, Cup Series regular Ross Chastain, driving a fifth truck for Niece Motorsports, inherited the lead. Once in the lead, Chastain dominated for the majority of stage two.

Chastain’s time at the front was short lived however, as Niece Motorsports teammate Hocevar began hounding him for the lead in the closing laps of the stage. Hocevar eventually passed Chastain and took the lead for the first time on lap 86. From there on, it was smooth sailing for Hocevar as he picked up the stage two win.

Chastain inherited the lead once again on pit road during the stage two caution, and the final stage was underway on lap 97.

But the racing did not last long, as the caution was brought out once again for a multi-truck crash involving Tanner Gray, Hailie Deegan, Austin Wayne Self and Chase Purdy on lap 98.

On the ensuing restart, Nemechek – who had worked his way back up to second after a loose wheel at the end of stage one – passed Chastain for the lead on lap 106.

Nemechek had no challenges for leading after passing Chastain, but a spin by Heim on lap 117 gave Christian Eckes the lead after he elected not to pit under the caution. Nemechek once again made it back to the lead for good on lap 123.

For the remaining 25 laps, the race turned into a battle between Nemechek and the Niece trucks of Hocevar and Chastain. With 6 laps to go, Nemechek was on his way to victory until a crash by series point leader Ben Rhodes forced an overtime finish.

On the overtime restart, Chastain missed a shift and a potential top five finish turned into a 26th place finish off the lead lap. Every truck was able to avoid Chastain, and the race concluded with Hocevar trying to run down Nemechek in the final four turns.

Hocevar came close, but Nemechek prevailed by half a second to score his first win of the season.

During his post-race interview, there was a frightening moment as Nemechek almost got hit by a beer can from the grandstands. Fortunately, the can missed.

The Camping World Truck Series will return next weekend at Kansas Speedway. The Wise Power 200 will take place on Saturday, May 14 at 8:00 p.m. ET, with TV coverage provided by FOX Sports 1.

Who did worse Matty D or Hallie?

Hailie easily. Both are having bad seasons but Hailie has by far been the worst. Danica 2.0(or 3.0 if you count Decker)