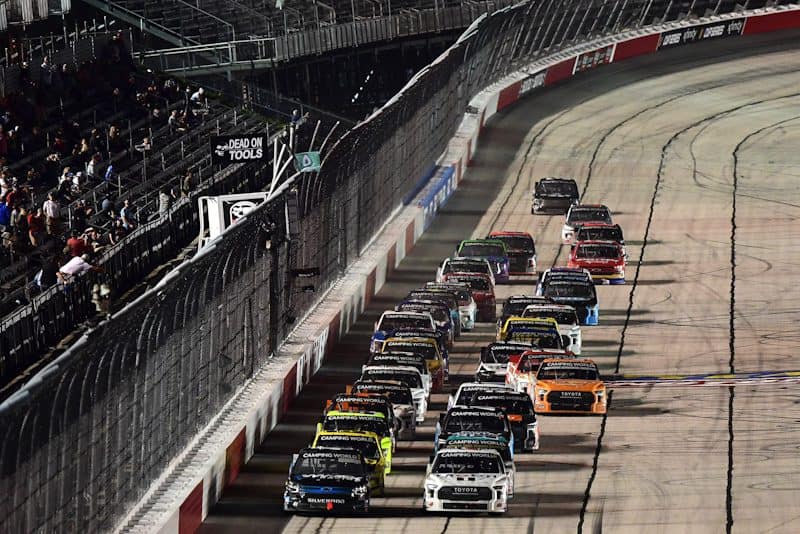 John Hunter Nemechek swiped the lead with 24 laps to go in his No. 4 Kyle Busch Motorsports Toyota and held off Carson Hocevar in overtime to win the NASCAR Camping World Truck Series event at Darlington Raceway on Friday evening (May 6).

After three consecutive top-five finishes, Nemechek finally cashed in with his first win of the season.

The 24-year-old passed Christian Eckes for the lead on lap 123 after dancing by the sliding truck of Grant Enfinger and held the lead on the final pair of restarts for the 12th victory of his Truck Series career.

It appeared Nemechek, who won the pole earlier Friday, saw victory lane slip away after he pitted for a loose wheel on lap 58 that dropped him 15 positions. However, Nemechek bit down on his teeth and clawed his way back into the fight.

“I thought we gave it away early, but we fought our way back,” Nemechek, who led 70 laps, including the final 27 for the win, told Fox Sports 1.

The victory snapped a 15-race winless streak after his last win at Pocono Raceway last June.

Kligerman was the victor of stage one while Hocevar collected his 10 bonus points in stage two, as both drivers picked up their first-ever stage wins.

Reigning Truck Series champion Ben Rhodes suffered a flat left-rear tire on lap 143 in turn one to bring out the 10th and final yellow. Rhodes smashed the outside retaining wall with the right rear of his No. 99 Toyota, suffering significant damage before spinning toward the infield.

On the final restart, Cup regular Ross Chastain suffered a mechanical issue that caused much of the field to check up. That allowed Nemechek to pull away from the field while Hocevar and Enfinger were left trying to run Nemechek back down to no avail.

The most significant wreck of the night occurred on lap 99 when Tanner Gray blew a tire and had contact with Chase Purdy, turning Purdy’s truck into the fence. The carnage collected Hailie Deegan, Austin Wayne Self, and Kris Wright.

On lap 116, Corey Heim hit the wall after a flat right front tire. Despite the damage, he finished on the lead lap in 23rd.

Kansas Speedway is next on the schedule for the Heart of America 200 (8 p.m. ET, FS1, MRN, SiriusXM NASCAR Radio).