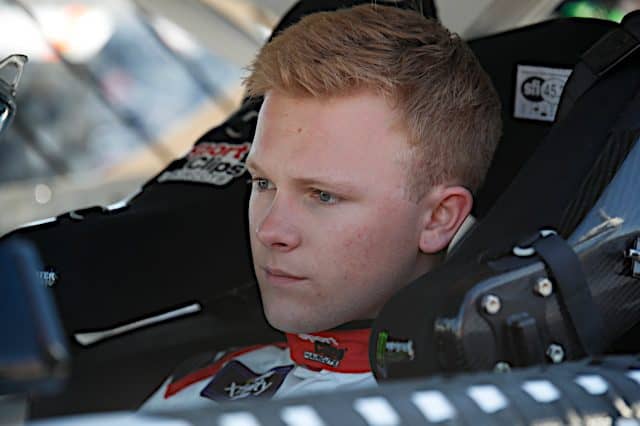 Ty Gibbs will lead the field to green for Saturday’s (May 7) Mahindra ROXOR 200 at Darlington Raceway.

16 cars took the track for Friday’s NASCAR Xfinity Series qualifying session at the 1.366-mile oval before raindrops began to fall. Of the 16 to make laps, Tyler Reddick was the fastest at 165.565 mph.

However, none of those speeds will count. After efforts were made to dry the track, the rain did not let up and qualifying was officially cancelled.

Gibbs will be joined on the front row by Josh Berry, last weekend’s winner at Dover Motor Speedway.

Berry’s JR Motorsports teammates Justin Allgaier and Noah Gragson will make up the second row, while Xfinity Series point leader AJ Allmendinger will round out the top five.

Brandon Jones starts sixth and Sam Mayer rounds out the four JRM cars in seventh. Riley Herbst will be the highest-starting Ford in eighth, while Ryan Sieg and Sheldon Creed complete the top 10.

Due to their lack of owner points, Brennan Poole and Cup Series veteran Chase Elliott were the two drivers that failed to qualify for tomorrow’s race. Elliott was the 2014 Xfinity Series champion, but he was not eligible for the Past Champion’s Provisional because he is running for Cup Series points. Frontstretch’s Dalton Hopkins spoke with members of the JR Motorsports No. 88 who confirmed both Elliott and the organization will not try and buy a ride to put him in the lineup.

Carl D.
Reply to  Get Real

Does NASCAR know? You should call them.