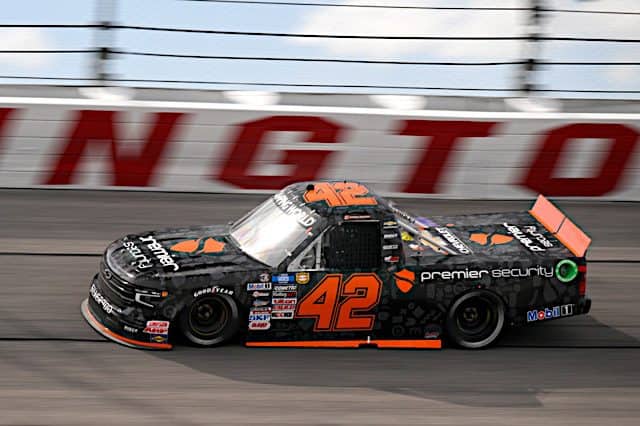 On lap 92 out of the total 149 laps ran on Friday (May 6) night’s Dead On Tools 200 at Darlington Raceway, Hocevar crossed the line to win his first career stage victory in the Truck Series. Winning your first stage is great in its own right – with 10 extra points and another playoff point to boot – but what made the triumph even sweeter was that he had beaten full-time Cup Series driver Ross Chastain to do it.

Hocevar’s pass of Niece teammate Chastain hadn’t happened through a clever pit strategy or fresh tires either. Hocevar had run the Melon Man down to make the pass for the lead before the end of stage two. On Friday night, the No. 42 Niece Motorsports Silverado was fast – maybe even race-winning fast.

But the 19-year-old knew better than to celebrate early. He had been there before. In fact, he had been there only one race earlier at Bristol Motor Speedway when he was leading with only four laps to go until he was passed by eventual race winner Ben Rhodes.

Friday’s race at the Track Too Tough to Tame would be little different. Hocevar would eventually settle for another second-place result on Friday night – the third of his Truck Series career.

“Anytime I think I’m going to win or start preparing what I’m going to say in my victory lane speech, it all goes to hell in a hand basket,” said Hocevar. “I go with the Dale Jr. philosophy of, ‘What’s going to go wrong now? What’s going to keep me from winning this race?'”

During the second stage break, Hocevar pitted from the lead with the rest of the lead lap trucks all coming down to pit road also for those precious fresh four Goodyear Eagles that prove to be all the more important with each race at Darlington.

Yet when the No. 42 truck finally exited pit road, seven competitors were now in front of Hocevar after a slow stop.

“We went to pit road first and went out eighth,” said Hocevar after the race. “I wouldn’t say that was it, but it didn’t help.”

It was a blow to morale for sure, especially considering that there was a little over 50 laps left to pass seven of the fastest trucks in the field. However, the No. 42 truck continued to claw its way through the ranks. Before anyone realized it, the truck with the Travis Pastrana throwback paint scheme was back in the top five.

And finally, a caution appeared with 21 laps to go, and with it a second chance for Hocevar.

A big hit for Blaine Perkins and Tate Fogleman at Darlington. https://t.co/P4xck2qerA pic.twitter.com/UdfIXTxgiH

Restarting next to Kyle Busch Motorsports driver John Hunter Nemechek, there was open race track in front of the truck. The Niece Motorsports truck would restart on the bottom of the front row.

While the bottom lane was not the preferred lane choice of the night, Hocevar had teammate Chastain restarting behind Nemechek.

“With having a friend in fourth, it made my decision much easier to go into the front row,” said Hocevar about teammate Chastain.

But when they entered turn one, Hocevar’s truck died – but only temporarily.

An electrical issue temporarily reduced the speed of the No. 42 truck on the restart which allowed Nemechek to pull ahead. Way ahead. And once again, bad luck had prevented any success for Hocevar. It seemed he would have to pilot his truck to another second-place finish.

Until another caution came out.

With a spin from Rhodes, the Niece driver had another chance at nabbing the lead from Nemechek. Like Hocevar, the 24-year-old KBM driver was winless so far in 2022. Unlike Hocevar, he had plenty of Truck Series wins in his career. 11 to be exact. Furthermore, he knew exactly what was going through his lead rival’s mind.

“Anytime you’re leading the race, you got to be a little bit worried something was going to happen,” said Nemechek about the final restart. “I know second sucks when you’re that close so many times. I didn’t know what (Hocevar) was going to try or if he was going to try a slide job.”

But Hocevar didn’t try anything like that – or at least he didn’t have the opportunity to.

Instead, Hocevar simply did the best he could to try to stay alongside Nemechek through the first two corners. Alas, it didn’t stick. Nemechek was clear by the time they had reached the backstretch, and that was all she wrote.

“I think I was a little better in (turns) one and two and I could’ve maintained there. I wasn’t better than him in (turns) three and four but I sure as hell was going to drive way deeper than him.”

It’s Hocevar’s second consecutive runner-up result, and his fourth top five of 2022. For Niece Motorsports, who had fielded four trucks on Friday night, the Michigan-native is the only driver to have earned a top ten result for the team throughout the first seven races of the year.

That list of Niece drivers includes Chastain, who despite have an issue on the final restart, still had nothing but nice things to say about his up-and-coming Truck Series teammate.

“He’s a heck of a race car driver. He’s driving that No. 42 truck for everything it’s got.” Chastain, who is the only driver to have won a race for Niece Motorsports, told Frontstretch. “(Nemechek) just beat us tonight. It’s ok. It happens. I just want him to be enjoying these moments and realizing how good of a driver he is.”

Whether he realizes it or not, Hocevar still made progress on Friday by earning his first career stage win. To make things even better, he now sits well within the playoff field in sixth – a whole 56 points above the cutline.

“I feel bad for Daniel Hemric or anytime anybody’s laughed at him. I mean it’s tough to be the best car and have the best thing happen,” said Hocevar. “But we had a lot of adversity. We had to come from eighth with two restarts left. To be able to come back and run second is tough to do.”

Say what you will about Hemric, he did eventually win his first Xfinity Series race.

Which won Hemric a championship.