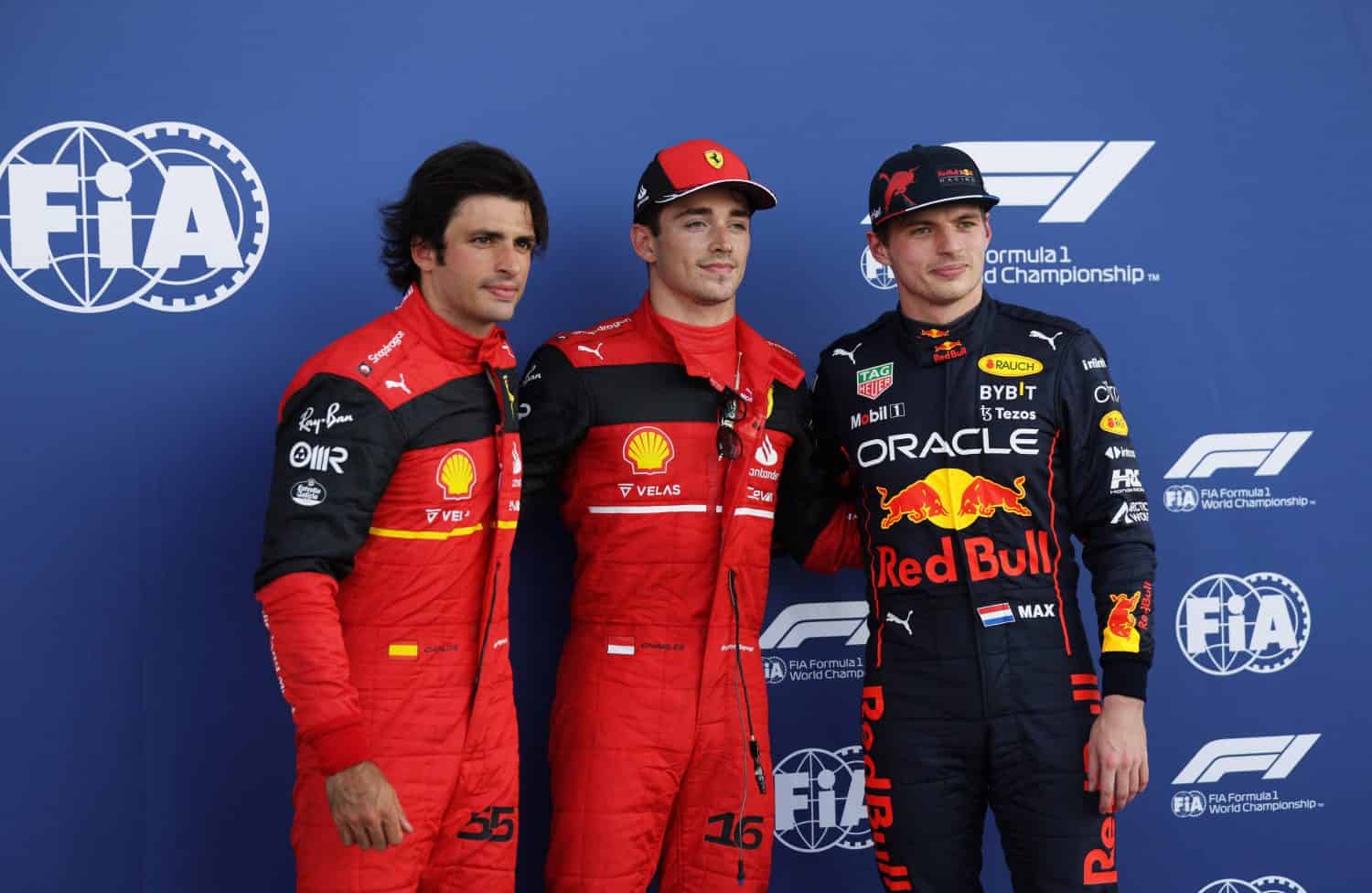 Charles Leclerc took his third pole position of the season in Saturday’s (May 7) qualifying session for the Miami Grand Prix. Carlos Sainz will start in second with Max Verstappen following in third.

Though qualifying to this point in the year has been the Max and Charles show, Verstappen’s bid for pole was ended when the back end of his Red Bull stepped out from under him on his final lap of Q3. This left the front row to be decided between Leclerc and Sainz.

This pole marks a quick return to form for Leclerc, who saw the last round in Imola slip through his hands in the closing stages.

“The last weekend hasn’t been great for me, I did a mistake in the race, but today went well,” Leclerc remarked. “We’re starting on pole and we need to finish the job tomorrow.”

“[Red Bull] are extremely quick in the straight lines, we are quick in the corners. It will be a tight challenge tomorrow, and hopefully we’ll come back on top.”

Leclerc may be on pole, but the happiest man in red may be Sainz, who had placed his Ferrari in the wall in Miami’s FP2, as well as retiring from both the Emilia Romagna and Australian Grands Prix. This return to form places Sainz in prime position to challenge Leclerc off the line come Sunday.

Behind the Ferraris, Verstappen had a loose back end undermine his push for pole at the last minute.

Leading his teammate Sergio Perez through the first sector, Verstappen took a bit more curb than his Pirelli tires could handle through turn six and had to quickly counter-steer off track to keep his Red Bull car facing the right direction.

“I literally did four or five laps yesterday, so the whole day today was still trying to learn the track … to be that competitive in qualifying, I was a bit surprised,” Verstappen said.

“We have a good chance for tomorrow. We have good top speed, the car is handling well. So I’m looking forward to that.”

While this ended his chances for pole, his third place time stood without issue. Verstappen and Perez will share the second row on the grid.

Valtteri Bottas and Lewis Hamilton both had desirable Saturdays as they placed fifth and sixth, respectively. Likewise, Lance Stroll made his first Q3 appearance of the 2022 season with a 10th place performance.

The Alpha Tauri duo of Pierre Gasly and Yuki Tsunoda placed seventh and ninth, sandwiching the McLaren of Lando Norris in eighth place.

The end of Q2 bore some unexpected eliminations, while fortune shined down on others.

George Russell, who encountered some serious porpoising issues early in the session, spent the majority of the session near the bottom of the timetable. Despite having paced Mercedes in most aspects to this point of the season, the Briton was unable to put together a proper lap and was in 12th place when Q2 drew to a close.

Just ahead of Russell, Fernando Alonso also missed a shot at the top 10 shootout, coming home only 0.032 seconds behind Gasly.

Sebastian Vettel and Daniel Ricciardo both found themselves out-qualified by their teammates. Vettel will start 13th with Ricciardo behind in 14th.

Mick Schumacher had an uneventful session, placing 15th and nearly three tenths off the cutoff time set by Gasly.

Of all sessions, Q1 may have been the most surprising in terms of eliminations. However, everyone escaped the session cleanly with no on track incidents or collisions.

Starting in 16th place will be Haas’ Kevin Magnussen. Magnussen missed out on the final spot in Q2 by just over a tenth of a second to Bottas, marking his second Q1 elimination of the season.

In a break of the status quo, Zhou Guanyu will start in 17th, the first Q1 elimination of his young F1 career. Zhou’s final flying lap was respectable, perhaps offering him a shot at advancing to Q2 before it was interrupted by heavy traffic heading into the turn 17 hairpin.

Next in line is the Williams pair of Nicholas Latifi and Alex Albon, continuing a tumultuous season for Williams thus far. With Albon starting in 18th, to Latifi’s 19th, the Canadian has been out-qualified by his teammate in every round of 2022 to this point.

Esteban Ocon will start in 20th position for Sunday’s race. Owing to a hard crash in Saturday’s FP3, Ocon’s chassis sustained damage that could not be repaired in time for qualifying. Consequently, the Frenchman is scored as having set no qualifying time.

The Miami Grand Prix will begin on Sunday, May 8th, at 3:30 pm ET with coverage on ESPN.

The starting grid is as follows: