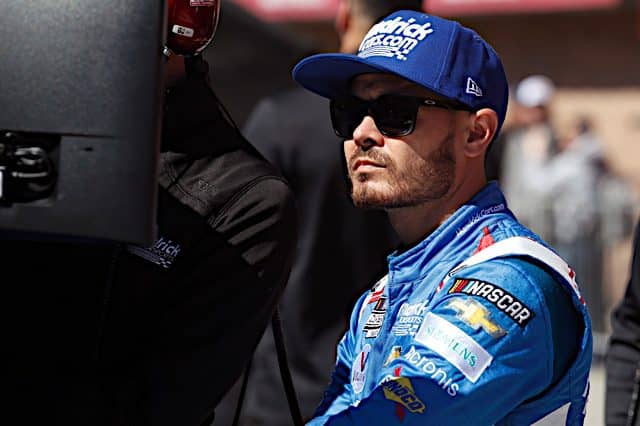 This weekend, the NASCAR Cup Series has a date with the Lady in Black: Darlington Raceway. Let’s set your daily fantasy NASCAR DraftKings lineups for the Goodyear 400, airing on Sunday, May 8 at 3:30 p.m. ET on FOX Sports 1.

It’s truly a special time for everyone, as many drivers and teams commemorate racing’s history with an array of throwback paint schemes.

It’s also the third consecutive year Darlington will host more than one race after being scaled back to one event each year from 2005-2019. The last few spring races have been just 400 miles (except for 2020, which had an extra midweek race under 350 miles).

So, how should you approach this race for daily fantasy (DFS)? Well, as is often the case at most tracks, you need to choose drivers that can dominate and lead laps. Last year’s race saw Martin Truex Jr. stay out front for a whopping 248 of 293 circuits. The following event in the fall had Kyle Larson and Denny Hamlin lead over 100 laps apiece. You’re likely to see just one or two drivers lead a large chunk of the laps once again.

It’ll also be interesting to see how these Next Gen cars take to the abrasive Darlington surface, especially since there’s only been one track with older, rougher asphalt so far this year (Auto Club Speedway). While parts of Darlington’s turn 2 were repaved in 2021, it remains one of the tougher tracks on both tires and handling on the Cup circuit.

Practice and qualifying Saturday should make a major impact on how you’ll set your lineup. Coverage starts at 10:30 a.m. ET on FOX Sports 1 if you’d like a closer look at the field.

Before I share which drivers I’m considering this week, here’s a look back at last week’s results from Dover Motor Speedway:

Unfortunately, I chose the wrong Hendrick Motorsports driver, as William Byron didn’t do as well as I had hoped. Neither did Austin Dillon, who placed 23rd. But Justin Haley hung in there for an 11th-place finish, earning the second-best score of the lineup.

Out of all my lineups, this one just missed the cash line in the $6,000 Quarter Jukebox, but it would’ve cashed in the $1 single entry double-up.

Larson has the best average finish at the 1.366-mile egg-shaped oval among active drivers, which is pretty remarkable considering he hasn’t won there yet. The driver of the No. 5 Chevrolet came close last season, finishing runner-up in both events and leading 156 laps in the fall. He also was second in 2019 and third in 2016 and 2018, leading 284 circuits in the latter event.

This season, Larson’s had some rough races, with four finishes of 29th or worse. However, the reigning NASCAR champ has earned three consecutive top-10 results, leading 78 laps during that stretch to right the ship. It’s his best performances since top-two finishes at Auto Club and Las Vegas Motor Speedway.

While a win would be nice (especially at this salary), all you’d need is for Larson to lead a bunch of laps, record some fastest laps and earn another top 10.

OK, I know Elliott said that he feels like he’s struggled at Darlington, but I still am placing him in my pre-qualifying lineup. I mean, yeah, he didn’t get to make the NASCAR Xfinity Series race thanks to rain and thunderstorms in the middle of the qualifying session. And he has four results of 19th or worse in the last six Darlington races.

But these don’t tell the whole story. Elliott crashed at the end of the midweek 2020 event while running near the front. Then, that fall, he led 114 laps before Truex’s mistimed pass for the lead left them both further in the pack. The No. 9 also has a couple of top fives at this oval, in 2018 and the first race in 2020, as well as a seventh place last spring.

Additionally, Elliott has momentum on his side, as he snagged his first victory at Dover last week after leading 73 circuits. The current Cup points leader has just one result worse than 14th so far this season — a 26th at Auto Club. He also has eight top 10s, including four straight, and could keep the trend going this weekend.

Kevin Harvick didn’t perform as well as I thought he would last week at Dover but he did place ninth, scoring 39.3 fantasy points on DraftKings in the process. It was his second-straight top 10 and fifth on the year; his best Cup finish so far in 2022 is second at Richmond Raceway.

Now, Harvick heads to one of his best racetracks: Darlington. Besides his three victories in 2014 and two in 2020, Harvick also has ended the last 12 races there inside the top 10. He led 159 laps in the first race back from the COVID-19 break in competition in 2020, as well as 214 circuits en route to second in 2016. Although Harvick hasn’t led as many in the past four events, he’s still run strong and should do so once again this Sunday.

Jones started out with good results at the Lady in Black from 2017-2020, including a victory in 2019. But that was with stronger teams in Furniture Row Racing and Joe Gibbs Racing. Last year, he finished much worse, with an 18th in the spring and 32nd in the fall. I wouldn’t put too much on that 32nd place, as Jones had to retire early due to an engine problem.

He and his Petty GMS Motorsports team are starting to figure things out now with back-to-back top 10s. Jones finished sixth at Talladega Superspeedway (just missing out on his first win with the team) and followed that up with a 10th at Dover. He also earned a third place at Fontana in February after recording 23 fastest laps and leading 18 laps.

Can Jones get back to the same form he had with JGR? Probably not, but you never know. Even if he doesn’t win, a solid top-10 finish will produce another good score on DraftKings.

At this point in the lineup, we’re just looking for drivers that can advance their position after starting further back. Chris Buescher is one of those who can produce under the radar. In fact, he’s finished all but three Darlington races better than where he began. His first four events at the 1.366-mile course were 17th or better. Then, last year, he placed ninth in both the spring and fall races.

Buescher has a new teammate this year in Brad Keselowski, who has joined the team as co-owner of RFK Racing. The group has gone through growing pains with the Next Gen cars, but last week, Buescher showed some strength with his first Cup pole. He ended up eighth, his third top 10 of 2022.

Be sure to see where Buescher qualifies, but a midpack start or worse could net you some important position differential points.

Usually, I play drivers of this salary at places like Talladega or Atlanta Motor Speedway, but if your more expensive drivers can dominate, and Corey LaJoie gains spots, he’ll be a good addition to your lineup. LaJoie has finished the past three races in the teens — much better than where he started, producing a position differential of +29. He also was 15th at Las Vegas and fifth at Atlanta, showing some strength at intermediates.

At Darlington, LaJoie has advanced his position in five of eight events, most notably last fall when he ended 15th. Although Spire Motorsports is not a strong team by any means, their driver of the No. 7 has shown that he can still move through the field at certain racetracks. Let’s hope LaJoie does that this week.