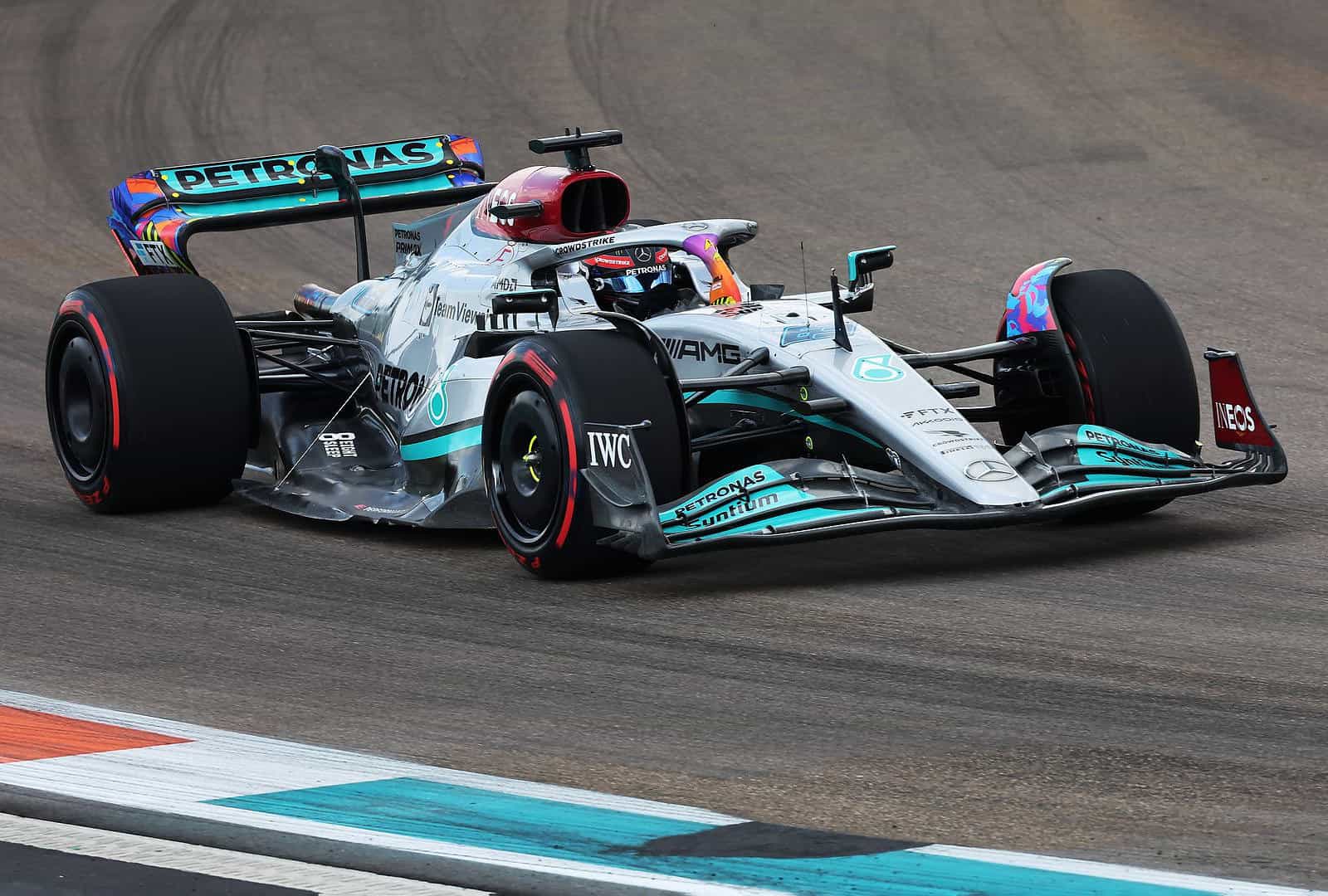 If one could only use one word to describe the Miami Grand Prix racetrack, it’s hot. Air temperate at the track for Friday’s Free Practice sessions hovered in the low 90’s. With the race and qualifying this weekend both starting in the late afternoon, it’s going to be extremely hot all weekend, which could turn muggy if some of that stereotypical Florida rain comes through.

That heat is going to make the pavement extremely slick all weekend. The race may well turn into a battle of attrition, especially if there is a fast moving rain storm that is in-and-out in 20 minutes.

Outside of the weather, the track itself resembles modern F1 street circuits such as Baku and Saudi Arabia, combining the narrowness of a street circuit with the high speed straightaways of a purpose built F1 facility.

The first section of the course circles around Hard Rock Stadium, with a short chicane after the first turn. The next section after a mild left and right turn at the southwest corner of the stadium is probably best known as “the fake marina area”, with turns six, seven, and eight circling the now infamous marina.

In F1 news today, the fake marina at the Miami Grand Prix track now has fake water added. Drivers have been briefed not to jump in it if they win the race. #MiamiGP pic.twitter.com/c4qhw6CfWP

Seven in particular has been highlighted by several drivers as the most pivotal turn on the course, a blind corner that determines how fast a driver can be on the long “frontstretch”, really two straights divided by a slight left and slight right that the driver takes without lifting. This is the fastest part of the track, and there should be plenty of drafting overtakes there.

An area of concern for all teams should be turn 14 to turn 16. The cars carry a lot of speed entering this tight uphill chicane, right at the highway underpass and easily identifiable with the walls plastered with Red Bull Racing advertisements. A lot of drivers ran slightly wide into this section on Friday and almost spun out trying to avoid the wall.

“[This] section… looks very narrow, and quite slow,” said Fernando Alonso, the most experienced driver in the field, about that area. “And maybe that’s not fun to driver in a Formula 1 car… that’s probably the trickiest part of the circuit.”

“It was a tricky one I found,” said Williams F1 driver Alex Albon prior to practice. “One of the longest circuits to get me up to speed, at least on the simulator. It seems very technical… the kerbs seem very different to what we’re used to. Sometimes there are no kerbs at all. So I think track limits will be a big topic this weekend.”

FP1 was fairly pedestrian, with just one incident of particular note. Valtteri Bottas spun out entering turn seven with 25 minutes to go in the session, and was unable to restart the car. The Alfa Romeo was lifted off of the track, and the red flag was lifted nine minutes later.

FP2 was a little more action packed, with turn 14 claiming its first victim of the weekend; Carlos Sainz spun out into the wall in the tight chicane. It’s another setback for the young Spaniard this season, who largely outperformed his teammate Charles Leclerc but has struggled this year even with a much better car. The Sainz wreck happened with 42 minutes in the session, and the session resumed with 31 minutes remaining.

From a sporting standpoint, the biggest question exiting Friday is if Mercedes has finally found its mojo once again. George Russell was fastest in FP2, while Lewis Hamilton was able to recover from eighth in FP1 to fourth in FP1. There is a big difference between Friday and Saturday in an F1 weekend, but the big thing Mercedes hasn’t had this year has been raw speed.

Red Bull is also facing further reliability questions. Max Verstappen only completed his out lap before losing power in FP2. Red Bull has had problem after problem this season when it comes to this situation. It’s interesting looking at the top three and how none of them are perfect; Ferrari has been the fastest but they still have porpoising at the end of straights, Red Bull has been the best overall but still have reliability problems, and Mercedes has better reliability that either team but is noticeably slower.

The Miami Grand Prix will be held at 3:30 p.m. ET on Sunday, May 8th. It was be broadcast by Sky Sports on the ABC Network in the United States.