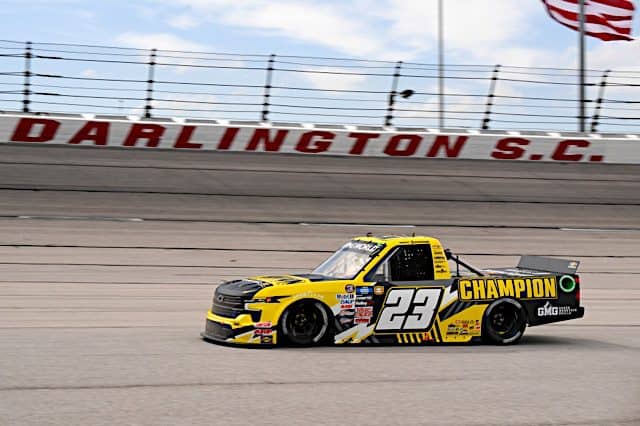 Grant Enfinger‘s return to GMS Racing has now bore fruit as the Alabama native finished third in Friday’s (May 6) Dead On Tools 200 at Darlington Raceway.

Enfinger started third in the rain-delayed race and was in prime position to capitalize if leaders John Hunter Nemechek and Carson Hocevar tangled in the two laps of overtime, but Enfinger stayed in third.

“I was hoping with new tires that we’d have enough mechanical grip to hold it,” Enfinger said after the race. “We were just leaning on the air so much with these trucks, you lose a little bit so it’s a big deal. We were committed, we were fighting to steal the lead right there, more or less. If we could’ve stolen the lead right there, who knows? Maybe we could’ve made something happen, but we finished P3 and that’s the truck we had all night.

“[…] We struggled the first few races of the year but I do feel like we got a direction, feel like we’re gaining on it. I got all the confidence in the world we’re gonna unload next week at Kansas [Speedway] with a shot to win.”

The 2022 season was a homecoming of sorts for Enfinger with his return to GMS after getting his first Truck Series win with the team back in 2016 at Talladega. His first full-time campaign in truck competition came in 2017 with ThorSport Racing, winning several races and nearly being crowned the 2020 champion. The following year, however, brought shuffling within ThorSport and leaving him on the outside of a full-time ride. Enfinger drove part-time in 2021, competing in all but one race in a split schedule for ThorSport and CR7 Motorsports.

For 2022, Enfinger returned to GMS and to a full time seat, but not the start he wanted: two finishes outside the top 20 to start the year followed by a 12th at Atlanta Motor Speedway and his first top 10, which came at Circuit of the Americas. What followed were back-to-back eighth place efforts, capped off with the third-place effort at the Lady in Black.

“Yes, but that’s not saying a whole lot,” along with a laugh, was Enfinger’s response when asked if Darlington was his best weekend of the year.

“I feel like I’ve settled in good from the first time I came back to the shop there in late November and whatever it was,” he said. “I feel like I’ve settled in just fine, we just haven’t had the results — we haven’t had the speed through the first few races of the year. I feel like we’ve got a direction for things, […] I’ve known these guys for a long time, but it’s still different when you work with each other. I feel good about things going, just not happy with where we started. Definitely [a] great direction we’re going.”

Enfinger’s night nearly got away from him when he got loose off turn 2 earlier in the race, but on a snappy loose night for a number of trucks the driver of the No. 23 managed to save it.

Grant Enfinger straight up doing the Degeneration-X crotch chop at the laws of physics pic.twitter.com/DjILdxl38l

Including Darlington, the Truck Series has a grueling stretch of eight races in nine weeks, including road course Sonoma Raceway and dirt track Knoxville Raceway.

“I think it’s tough. They didn’t do us any favors with Sonoma and Knoxville in there, I do like the consistency of this racing for sure. That’s gonna take its toll on our Truck Series competitors, but man, at GMS Racing we’re prepared. We’re ready, we’re looking to pounce on this stretch.”

Enfinger finished fourth in both mid-race stages on Friday.

“A lot of it dictates on how good of a truck you got underneath you,” he said. “I feel like this is one of the most challenging places, but as a driver it’s definitely one of the most fun places to go to. When you’re off, it’s a very long day — when you’re on, it’s a lot of fun. We were fortunate enough to have a pretty good truck from the time we unloaded to where we finished right here.

“Feel like we were around a third-place truck all night and that makes it a pretty good night. I’ve had them out here where they’re a handful, and it’s long, you’re just counting the laps down. Definitely a great place, the Truck Series belongs here, so hopefully we keep coming here.”

A little under a third of the way into the 2022 campaign, Enfinger and company have found their stride in the No. 23 stable.

“I don’t think it was necessarily about the finish, but we do need to show some speed,” Enfinger said. “There is so much effort going into this [No.] 23 truck from GMS Racing, and Chevrolet and Champion Power Equipment has been with me so long. We want to give these guys results and contend for wins, you know, and we haven’t been able to do that [at] the beginning part of the year, but we showed decent speed all night tonight, so really from the first light of practice to when we loaded up, so definitely proud of the gains we made.

“I feel like what’s more important than that, I feel like we’ve got a direction to go. So, like I said, feel good about things going next week to Kansas, this whole seven races coming up.”