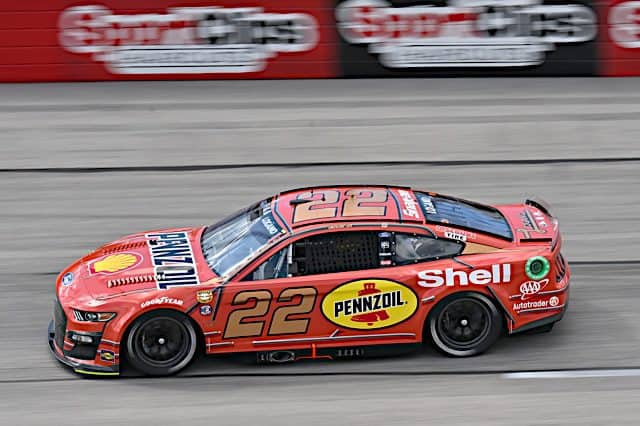 Joey Logano showed speed in practice and backed it up with his first NASCAR Cup Series pole of the season at Darlington Raceway on Saturday, May 7.

The No. 22 Team Penske driver laid down a fastest lap of 170.72 mph in the second round of qualifying.

“It’s so much needed for all of us,” Logano said after the session. “The last couple weeks were pretty rough, got in a couple of crashes and really just not being strong at Dover (Motor Speedway). To come in here and recover at Darlington was really nice with the Shell Pennzoil Mustang. I can’t thank Shell enough for letting me run this paint scheme because this is the coolest thing, and seeing it start on the front row is going to be so neat, just because this is a full circle for me. This is my first quarter midget paint scheme, it’s got all the same stuff on it since I was a kid, to have it on the front row.

“My dad’s driving one of the pace cars in my Mach 1 before the race, just a really cool story for us this weekend.”

Kyle Larson will start alongside Logano on the front row, while Joe Gibbs Racing’s Christopher Bell, Martin Truex Jr. and Kyle Busch round out the top five.

Denny Hamlin had an issue during his qualifying run. He’s slated to start 22nd.

Austin Cindric was quickest in practice, with Logano in second. Cindric will lineup in 19th.

Also of note, Chase Elliott and Kevin Harvick both missed qualifying, with Elliott having to go to a backup car after an accident and Harvick’s team needing to replace the diffuser at the rear of the car.