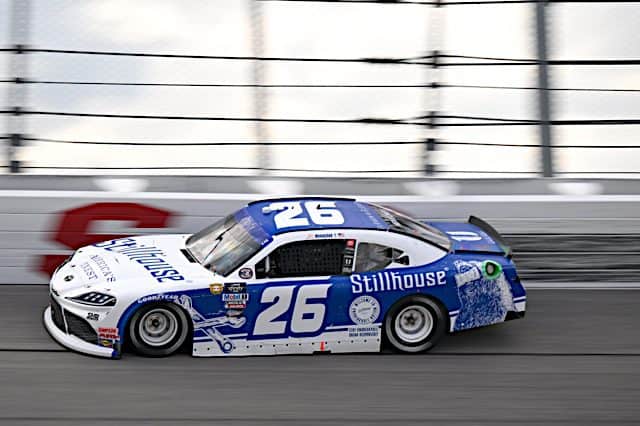 John Hunter Nemechek was less than 18 hours removed from leading 69 laps and winning the NASCAR Camping World Truck Series’ Dead On Tools 200 at Darlington Raceway. On Saturday (May 7) afternoon, he came close to winning the Xfinity Series’ Mahindra ROXOR 200 at the “Lady in Black,” finishing fourth.

Nemechek was piloting Sam Hunt Racing’s No. 26, a single-car team that’s been in operation since 2019, and scored its third top-five finish in team history and second-best finish overall. The Toyota entry was pacing the other leaders late, but a couple of cautions slowed things down, shook things up and Justin Allgaier emerged as the winner.

“I think that last run before the caution, maybe two laps before it came out, we were starting to cut away at Justin [Allgaier],” team owner Hunt said in the garage after the race. “I legitimately thought if it went green, we were gonna win the race or we were either going to be in a really good position to win, but that’s just how it goes, you know?

“It was a tough break with the caution coming out and all the different pit strategies, we’d had a first-or-second day and ended up fourth. The fact that we’re a little bummed for a fourth place just says how far we’ve come and how hard these guys are working.”

Nemechek also finished fourth in the second stage after scoring his first Truck Series triumph of 2022 the night before.

“A lot,” Nemechek said of how much he learned about Darlington from the truck victory. “The racetrack changed quite a bit, rubbered down quite a bit. Racing in the sun compared to night here is definitely different. I learned a lot and tried to apply everything I could today.”

“I think he just has a full-picture perspective,” Hunt said. “He has played the smaller-team game, he had NEMCO [Motorsports] for a long time and he’s been to Cup, he’s been with some of the best teams. I think he just understands this situation, he understands where we’re at as a team and he can just drive.

“It’s apparent in anything he gets in, but he’s just really turned out to be a great person, too. He goes beyond just driving for us, he helps us get better and he cares about it whether he’s in the car or not, which is something really special. It’s been a blast with him and hopefully many more to come.”

Rain threatened late but stayed away from the racetrack, a considerable cloud wall building up beyond the backstretch. Nemechek, however, wasn’t alerted to it.

“Haven’t heard a word,” he said with a laugh.

Hunt said the team did so to avoid throwing Nemechek off his rhythm.

“We had the radar up on the pit box,” Hunt said, “but as you see when he runs this track, he’s a centimeter off the wall everywhere and I think the last thing he needs is any sort of distraction or something that changes [his] school of thought. So we were watching it, we just kind of stalled out and we were really hoping that last run went all the way, because we thought we had a shot.”

Nemechek made two starts for the team in 2021, one of the most prolific drivers in a rotation consisting of Grant Enfinger, Santino Ferrucci, Jeffrey Earnhardt and a number of others.

“It’s been awesome,” Nemechek said. “Being able to run for Sam and the whole team, the whole organization, the small team that could. They’re working hard, they’re putting fast cars together. Equipment is definitely older than everyone that we’re racing competition-wise, but we’re still able to run up front. We’re still able to almost lead laps and be there, really, when it counts. Thought we had a shot to win there.”

“I think the two programs really complement each other,” Hunt said. “[Nemechek’s] guys on the truck side have always been willing to help us — I think they like seeing a smaller team kind of growing into its shoes. But I think [Nemechek’s] just confident. The truck race gets him track time, but it just builds a lot of confidence for him and he gets in this thing and he’s ready to go. We hung out last night after the truck race at the motor coach for a while and talked, but we’re friends beyond the racetrack, too, which is really cool to be able to do it like that.”

Nemechek was fast in practice but rolled off 23rd, the No. 26 taking a while to cut through the field. His fourth-place effort was his second-best of 2022 and third Xfinity top five overall.

“He’s definitely got a bunch [of races left],” Hunt said. “Stillhouse, our sponsor here, who we can’t thank enough, they’ll do Road America next

The team didn’t run a throwback scheme at Darlington, but Nemechek and sponsor Stillhouse Vodka will next compete at Road America and Michigan International Speedway, and Nemechek has several additional dates taht have yet to be announced.

“The [team’s] attitude is always great,” Hunt said. “I think what I pride myself the most [in] with this company is — it’s 12 guys, one girl and it’s just great people. Everybody that works there is genuine, their attitude’s good, they’re hard workers, they’re selfless, so we were really building this thing around people and I think that’s what’s kind of starting to pay off.”

Really enjoyed watching John Hunter, & the Sam Hunt 26. That’s a paring I can really get behind.

Just like watching Parker Clingerman’s run in the truck race. Both teams showed that they could run with the big dogs, W/O the big $$$.

Well done to both teams & drivers.