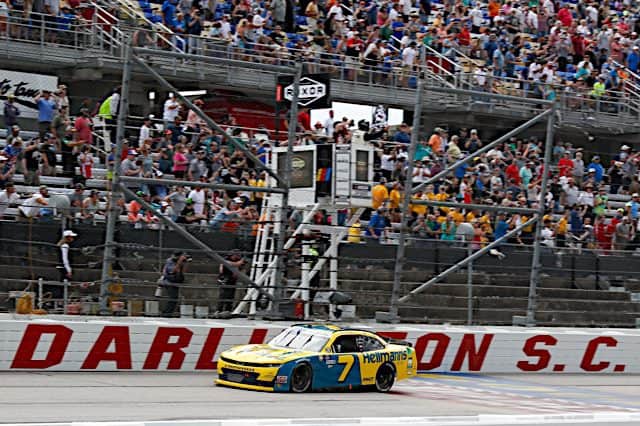 After a last minute battery change on pit road while the cars were rolling off to take the green flag, Justin Allgaier and his No. 7 Chevy Camaro team for JR Motorsports won at Darlington in the toughest way possible.

“We got the job done,” Allgaier told FOX Sports’ Regan Smith. ”The fans here are awesome. I could see everyone standing there in those last few laps. This team right here was killing it all day. This Hellman’s Camaro was a testament to these seven guys here. Everyone at JR Motorsports works so hard.”

The day started with Ty Gibbs leading 18 of the first 22 laps. The race’s first two cautions came out in that time, with the first caution coming on lap 11 when Timmy Hill spun and the second coming on lap 21 when Jeb Burton spun in the No. 27 Camaro in turn 4 after a tire went down. NASCAR thought the spin looked suspicious and held Burton for one lap on pit road. Noah Gragson won the first stage with Gibbs in second, Josh Berry in third, Allgaier in fourth, and Riley Herbst in fifth,

Caution number four came when Myatt Snider spun in turns three and four on lap 76. The race went green for only a couple of laps later until Brandon Brown stalled on the frontstretch, causing stage two to end early on lap 89. Gragson won the second stage followed by Gibbs in second, Allgaier climbing to third, John Hunter Nemechek in fourth, and Tyler Reddick in fifth.

Alex Labbe caused the sixth caution after his back bumper came loose and was dragging across the racetrack on lap 122. Things were getting dicey with the front runners of Allgaier, Gragson, and the rest of the field behind them, but the seventh caution fell with just a handful of laps to go due to Joe Graf Jr. spinning on the backstretch. This led to some strategy in the pits in the final moments of the race.

With 10 to go, Allgaier came down pit road first with several contenders behind him. Allgaier took four tires and lined up seventh on the restart, making it up to second in a lap and a half after the green flag flew before Reddick brought out the eighth caution flag, blowing a right front tire in turn two.

Leader AJ Allmendinger, who said he felt like he was in the way for the majority of the race, chose the bottom lane while Allgaier chose the top. But it was no use as Allgaier jumped to the lead in turn one and cruised to his first victory since exactly one year ago when he won at Darlington last. The caution did come out during the final lap after Jeremy Clements got into Ryan Truex in turn four battling for position.

Next week, the Xfinity Series stars have the weekend off, but will head to Texas Motor Speedway in two weeks time to take on the SRS Distribution 250. It will be carried on FS1 starting at 1:30 p.m. ET, and will also be on PRN and Sirius XM NASCAR Radio.

As Allgaier blasted through the field in the first stage after starting in the back, it was obvious that he was the car to beat. Hats off to Little Gator.