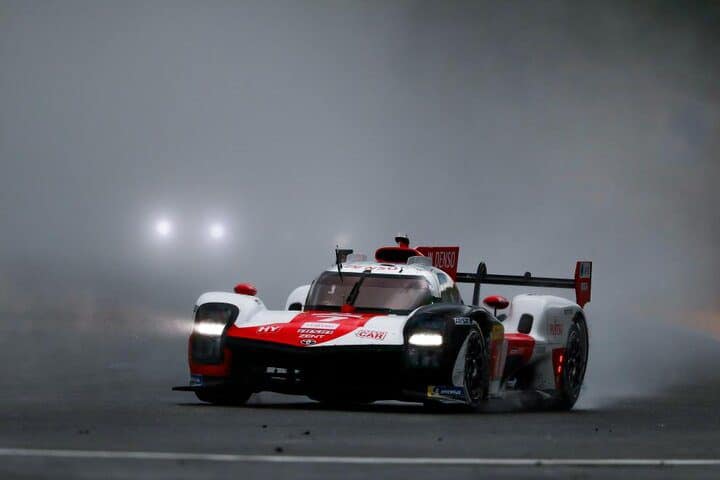 Toyota GAZOO Racing’s Mike Conway, Kamui Kobayashi and Jose Maria Lopez claimed overall victory Saturday (May 7) in the FIA World Endurance Championship TotalEnergies 6 Hours of Spa-Francorchamps at Belgium’s Circuit de Spa-Francorchamps.  It is a great comeback for the team after Lopez spectacularly crashed at Sebring.  It is also the team’s sixth straight victory at Spa.

Races at the Circuit de Spa-Francorchamps are well-known for changeable conditions.  Saturday was no exception.  The race started out in bone dry conditions, but rains showed up in the second hour to slow the pace.  Ultimately, there were two red flags during the race due to rain creating un-raceable conditions.  By the time the race ended, the sun was out and there was a dry line on the track.

Scuderia Cameron Glickenhaus’ Olivier Pla started from the pole and led early on.  Meanwhile, Sebastien Buemi in the No. 8 Toyota moved up from fourth to second on the start and hunted Pla for the first half-hour of the race.  On lap 16, Buemi was able to get past for the lead and began to pull away.

With all the bad weather in Spa, it was not actually rain that brought out the first red flag.  Just over an hour into the race, ARC Bratislava’s Miroslav Konopka lost control exiting the Fagnes complex and hit the barrier hard.

The ARC Bratislava has hit the wall at the exit of T13. We are under safety car.#WEC #6HSpa pic.twitter.com/VLY1wXfjFn

Konopka was reportedly dazed from the crash, which ended his day.  The barriers had to be substantially repaired, resulting in a 20-minute red flag.  This is mostly due to the fact that the Circuit de Spa-Francorchamps is a Grade 1 circuit and cannot be run on if a crash makes it fall out of FIA homologation.

When the race resumed, Buemi’s Toyota turned traitor on him and stalled on-track with a technical issue.  The team instructed Buemi to turn the car off and exit immediately without touching anything.  No further information was made available as to what the issue was, but Buemi had previously pulled over to reset his Hybrid system prior to pulling off.  The issue ended the No. 8 Toyota’s day.

During the safety car period that followed the wreck, it began raining.  Conway took over the overall lead when Buemi pitted, then chose to stop for wet tires.  This gave the overall lead first to Vector Sport’s Ryan Cullen, then to Team WRT’s Sean Galael.

The conditions continued to deteriorate and after only a few laps of green-flag running, the safety car came out.  Shortly afterwards, the second red flag came out due to conditions.  This ended up being a 27-minute stoppage.

The race was able to resume again briefly with light rain falling, but it picked up again, resulting in another safety car period.  During that safety car period, there were a number of incidents.  Most notably, Inter Europol Competition’s Alex Brundle spun on his out lap and hit the barriers hard, ending his day.  This hit damaged the Armco barrier.  While a crew was on-site checking the barriers, a Ferrari spun and came very close to one of the safety trucks.  This was the impetus for the race’s third red flag.

When the red was lifted for the final time, there were a little more than two hours remaining in the race.  The skies were starting to lighten up, but the track was still very wet.  Teams continued to ride behind the safety car for a couple of laps before the green flew with two hours and eight minutes to go.

When the race restarted, Team WRT’s Robin Frijns was still leading overall in his LMP2-class ORECA 07-Gibson.  The LMP2 cars were much stronger in heavy wet conditions than the Hypercars because they couldn’t make much use of their hybrid abilities.

However, shortly after the restart, the rain stopped and the sun came out.  This, along with the wet tires helping to remove water from the track surface, allowed the track to start drying.  When that happened, the Hypercars came to life.

The No. 7 Toyota’s margin of victory was 27.473 seconds over Signatech Alpine’s Nicolas Lapierre, Andre Negrao and Matthieu Vaxiviere.  The Glickenhaus of Pla, Pipo Derani and Romain Dumas ended up on the wrong tires late and made an extra stop.  They ended up a lap down in third.

In LMP2, Frijns lost the overall lead with an hour and 48 minutes to go, but being up front in the wet means that you have clear vision.  That allowed Frijns to run away from the rest of the class.

Behind Frijns, there was a fierce battle for second between Realteam by WRT’s Ferdinand Habsburg and United Autosports’ Phil Hanson.  The second United Autosports entry (No. 23) was in the mix until the driver’s door failed to open.  This forced driver changes to be made via the passenger door, costing the team a substantial amount of time.

Once Rene Rast got in the car, he was able to hold on to take the victory, but it wasn’t without danger.  In the closing laps, Rast ran into the spinning Ultimate LMP2 entry driven by Matthieu Lahaye, who had spun in front him.

Team WRT ended up on the lead lap overall in third.  Their margin of victory in class was 34.491 seconds over the Realteam by WRT No. 41 of Habsburg, Rui Andrade and Norman Nato.  JOTA Sport’s No. 38 for Antonio Felix da Costa, Will Stevens and Roberto Gonzalez was third, then Team Penske’s Dane Cameron, Felipe Nasr and Emmanuel Collard.  Hanson, Filipe Albuquerque and William Owen were fifth.

GTE-Pro saw Porsche GT Team’s Gianmaria Bruni start on pole, then cut his tire on the first lap, giving the lead over to teammate Michael Christensen.  The Ferraris from AF Corse came to the front during the rainy period of the race and were able to stay there.

However, the race came down to a three-car duel between AF Corse’s Alessandro Pier Guidi, Porsche’s Kevin Estre and AF Corse’s Antonio Fuoco.  Estre tried his hardest, but could never quite get alongside Pier Guidi.  Pier Guidi was able to hold on take the class win for himself and James Calado.

The final margin of victory was 0.523 seconds over Christensen and Estre.  Fuoco and Miguel Molina were third, another three-quarters of a second back.  Corvette Racing’s Tommy Milner and Nick Tandy were fourth.

In GTE-Am, it was Dempsey-Proton Racing’s Harry Tincknell, Sebastian Priaulx and Christian Ried who took the victory in their Porsche 911 RSR-19.  They ended up 1.539 seconds ahead of the TF Sport Aston Martin of Ben Keating, Marco Sorensen and Henrique Chaves.  Northwest AMR’s Paul Dalla Lana, David Pittard and Nicki Thiim were third, then AF Corse’s Francesco Castellacci, Thomas Flohr and Nick Cassidy.  The No. 46 Team Project 1 Porsche of Matteo Cairoli, Nicolas Leutwiler and Mikkel Pedersen were fifth.