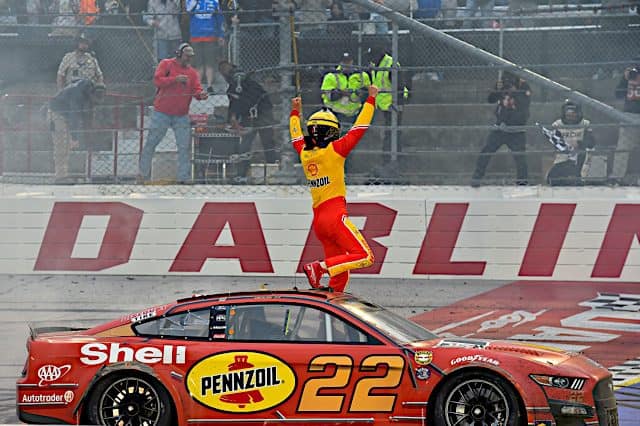 Since October of 2020, Joey Logano had not won at a permanent track in the NASCAR Cup Series. He scored victories on Bristol Motor Speedway’s temporary dirt surface and the Los Angeles Memorial Coliseum’s temporary quarter-mile, but had a rough go of it on the traditional ovals of NASCAR.

This Mother’s Day evening (May 8), he got the win on the oldest and most traditional speedway of them all: Darlington Raceway.

After getting into the wall fighting William Byron for the lead on a late-race restart, the Middletown, Conn. native spent 24 laps  sitting and stewing in his No. 22. In the closing circuits, the right rear on Byron’s No. 24 started to lose grip and Logano reeled him back in. Entering turn three on the penultimate lap of the Goodyear 400, Logano put the bumper to Byron and drove away.

Logano went on to score his first points-paying win of 2022, and the first of his Cup career at the historic Darlington Raceway. Byron ended up 13th.

As the South Carolina fans gave Logano what analyst Mike Joy politely called “mixed reviews,” Byron told FOX’s Jamie Little, “He’s just a moron. Can’t win a race, so he does it that way … he didn’t even make it a contest.”

"[Joey Logano]'s just a moron … He didn't even make it a contest."- William Byron pic.twitter.com/88WPpLBdTW

But the 2018 series champion had his response ready as soon as Regan Smith handed him a microphone: “You’re not going to put me in the wall and not get anything back. That’s how that works.”

"You're not gonna put me in the wall and not get anything back. That's how that works."- Joey Logano on his bump to get by William Byron at Darlington pic.twitter.com/9S1ubCpRHV

The No. 22 that Logano took from pole position to victory lane featured a throwback paint scheme to Logano’s first race car, and the driver acknowledged that significance: “Tell you what, the coolest thing is getting this car into victory lane. This is the car where it all started for me back in ‘95 in a quarter midget. … to all the young kids racing out there right now, this could be you.”

Tyler Reddick ended up second, with Justin Haley scoring his best result of the season in third. Kevin Harvick’s fourth-place finish is his 13th consecutive top-10 at Darlington, beating Bill Elliott’s record. Chase Elliott finished out the top five in his backup car. Christopher Bell, Michael McDowell, Ricky Stenhouse, Jr., Austin Dillon and Daniel Suarez rounded out the back half of the top 10.

Many of stock car racing’s biggest stars suffered problems during a tough 400 miles at the Track Too Tough to Tame.

Kyle Larson led the first lap from the outside pole, but brought out the caution in the middle of stage one, spinning as he tried to pass Kyle Busch for second. The 2021 champion had recovered to 11th and was still surging forward into the second stage until his No. 5 Hendrick Motorsports Chevy lost power. The first car out of the race, Larson was scored in last place, his fourth DNF in the first 12 races.

After leading laps early and finishing stage one in fourth, Kyle Busch was running solidly in the top 10 when he was collected by lap-down Brad Keselowski bouncing off the wall in turn two, damaging the steering on Busch’s No. 18. The two-time champion brought his wounded Camry down pit road, stopped at garage entry, climbed out and walked away.

After being checked and released from the infield care center, he explained why he stopped in that spot: “I just couldn’t make the corner.”

"Just couldn't make the corner."@JamieLittleTV talks with Kyle Busch after a frustrating end to his day at Darlington. pic.twitter.com/DXFF008Y6T

For another strong contender in Ross Chastain, it was a day of highs and lows. The Melon Man had kept his No. 1 Coca-Cola Chevy within sight of the lead all afternoon, chasing Logano to the line at the end of stage one and outdueling Martin Truex Jr. to score the win in stage two. But on the very next green-flag lap, Chastain got loose running under Denny Hamlin and nosed his No. 1 Camaro hard into the inside wall. He was done for the day.

Then late in the race, a nine-car pileup on lap 261, triggered when Truex got taken three-wide in front of the pack, involved top-10 runners Denny Hamlin, Kurt Busch, Bubba Wallace, Erik Jones and others.

While Byron was able to get ahead on the final restart, Logano closed in fast and bumped his way into the victory.

Elliott leads in the standings by 65 points over Byron and Ryan Blaney with 14 races left in the regular season.

Not a clean move in my opinion, but a racing move. Had it been Byron or Chase that administered the bump, fans would be praising them, but since it’s a driver fans dislike, they go after him for it. Heck, I don’t like Joey but the bump N run has been a staple of the sport since the beginning, just like Darlington itself. Fantastic race BTW. Darlington always puts on a show. Crazy to think that 19 years ago NASCAR was considering axing it from the schedule.

I think it’s more the fact he hit him straight into the wall, rather than actually bump him out of the way. Granted, Byron did get into him earlier, so he had it coming.

I agree. It’s one thing to move somebody, it’s another thing to wreck them.

Unfortunately, Logano’s always raced that way. Even going back to his early ASA and Busch East days.

Lagono is not going to let other drivers push him around they all know that so snowflake byron had one coming and got it so quit whining.

Logano can’t pass anyone without hitting them so why should anybody be surprised?

It makes a difference if you’re the bumper or the bumpee.

I’m not taking a position either way on this. But I will say this, you know what they about living by the sword.

He’s written several checks that haven’t cashed yet. The recipients may be waiting for the playoffs to get full value.