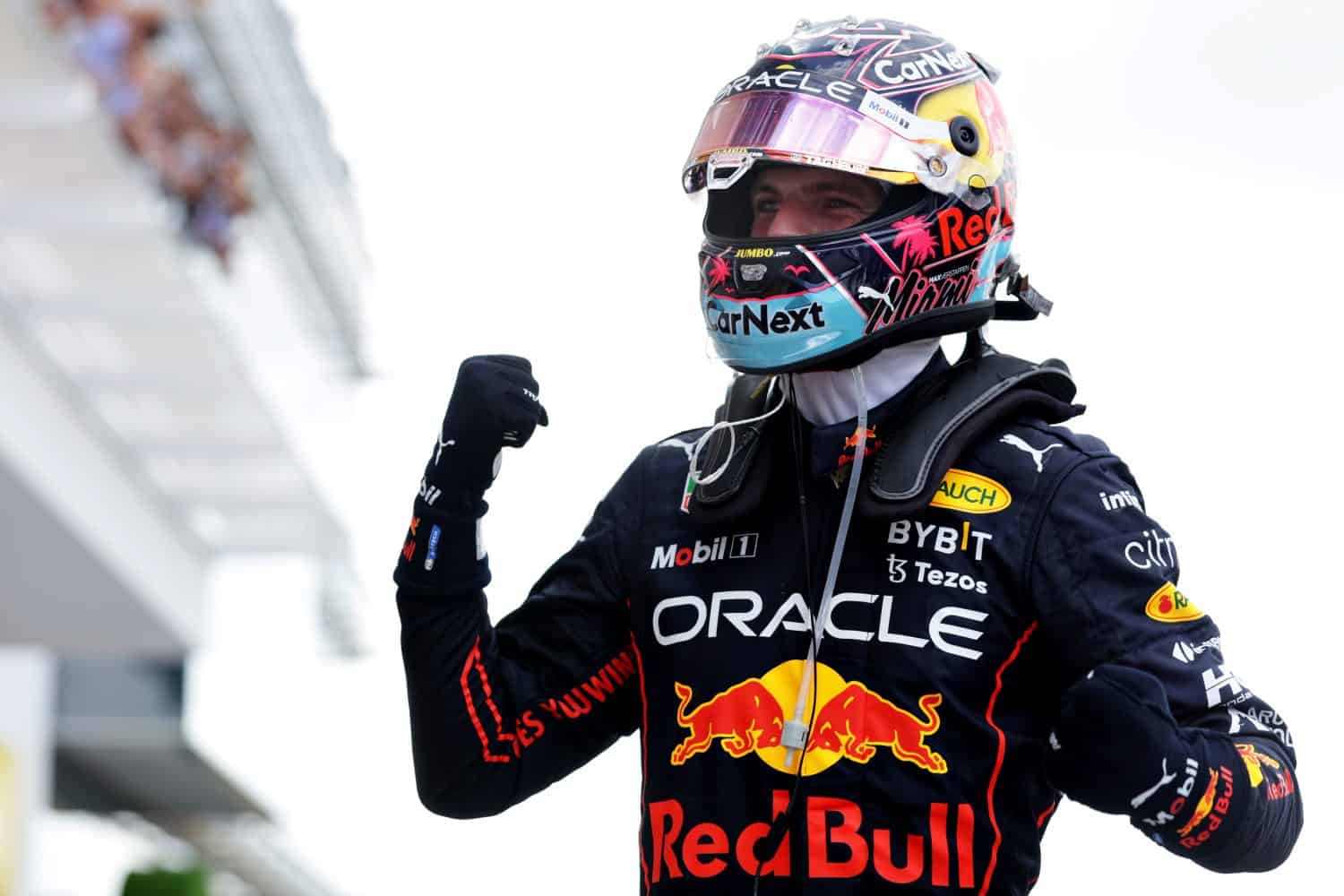 Verstappen has now won every race from which he has not retired in 2022, having failed to complete the Bahrain and Australian Grands Prix due to mechanical woes. Verstappen also took an extra point for setting the fastest lap of the race, bringing his points total on the season to 85 vs Leclerc’s 104.

“It was an incredible grand prix — very physical — but I think we kept it exciting until the end,” Verstappen said.

“I’m incredibly happy with winning here in Miami. It was an incredible Sunday for us.”

The race got underway in 90-plus degree conditions, under a scorching Florida sun. Leclerc led the opening laps from pole position, with Verstappen close behind after the Dutchman swung around the outside of second-place starter Carlos Sainz on the first lap.

The top four of Verstappen, Leclerc, Sainz and Sergio Perez remained static until lap nine, when Verstappen made a superb exit out of turn 17 to pass Leclerc on the frontstretch.

From this point, Verstappen maintained total control of the race bar a brief period following a late safety car where Leclerc managed to hang within DRS range of Verstappen from laps 47 to 53.

Sainz’s third-place finish marks his first podium since the Saudi Arabian Grand Prix. The Spaniard retired from both the Australian and Emilia Romagna Grands Prix due to on-track incidents.

Perez finished just behind Sainz after spending the final leg of the race harassing the Ferrari driver for third place. Perez reported a loss of power on lap 20, and Red Bull Team Principal Christian Horner later confirmed to the commentary booth that Perez was dealing with a loss of around 20 horsepower.

Red Bull’s top speed advantage — and a fresh set of medium tires — allowed Perez to hang close to Sainz despite the power deficit, but the Mexican’s only shot at Sainz ended on lap 52 when Perez got a bit too ambitious under braking into turn one and ran wide.

Despite barely missing heavy contact with the Ferrari, Perez was unable to attack Sainz after the fact and finished in fourth place for the second time this season.

Mercedes’ George Russell pulled the most opportune strategy call of the day, opting to run 42 laps on a set of hard tires, making his first pit stop on lap 42 under safety car conditions. With this, Russell extends his top-five finishing streak to all five races of 2022 to this point, solidly placing the Mercedes freshman in fourth place in the drivers’ standings.

Likewise, Esteban Ocon used a strategy of running long on hard tires, but switching to softs for the final stint to counteract the hindrance of starting in 20th place due to a crash in Saturday practice. Pitting under the lap 41 safety car allowed Ocon to secure an eighth-place finish, making up more positions than any other driver in the process.

More spectacularly, Lando Norris retired on lap 41 after contact with Pierre Gasly left his McLaren stranded on the backstretch with only three tires. Gasly had ran wide through the turns 5-7 complex and clipped Norris’ right rear while slowly rejoining the track. By the time the smoke settled, Norris was out of the car and Virtual Safety Car conditions had descended upon the track.

The VSC was updated to a full safety car on the next lap, allowing several drivers, including Hamilton, Perez, and Russell to put for fresh tires with 15 laps to go.

Gasly later retired from damage sustained in the incident.

Sebastian Vettel joined Zhou, Norris and Gasly in retirement after heavy contact between himself and Mick Schumacher bucked Vettel’s Aston Martin into the air in turn 1. With only three laps to go, the resulting rear end damage ended Vettel’s race while Schumacher was able to continue to the finish after pitting for a new front wing.

The next round of the 2022 Formula 1 World Championship will be the Spanish Grand Prix, set to take place on May 22, with coverage beginning at 9 a.m. ET on ESPN.

The finishing order for the inaugural Miami Grand Prix is: