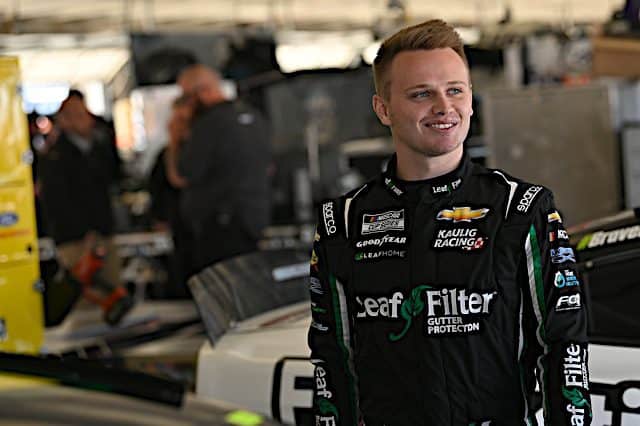 With each passing week, more drivers are beginning to figure the Next Gen car out. Some have been taking more noticeable boosts in performance than others.

At the Goodyear 400 (May 8) at Darlington Raceway, Justin Haley proved that he is on the rise with a top-five finish on Mother’s Day, the first of the season for the No. 31 team and Haley’s first with Kaulig Racing in the NASCAR Cup Series.

While several underdogs fell victim to “The Lady in Black” and were devoured rather than taming her, Haley left the track with an eye-opening finish and hardly a scratch on his No. 31 LeafFilter Chevrolet.

Haley entered the race with five top-15 finishes in the past seven races. However, a top 10 had eluded him. For a majority of the race, it seemed that momentum may be taking a wrong twist as the 23-year-old struggled to crack the top 20 in the first two stages.

Stage two in particular challenged the pedigree of the young driver. Haley had to make two pit stops under yellow at the beginning of the stage before falling a lap down later on. He would earn the lucky dog at the end of the stage.

It was a slow start to the beginning of the final stage for the No. 31 team. But as the laps wore on, Haley slowly began to climb the scoring pylon. A yellow flag waved with 39 laps to go with Haley in the 12th position, his highest positioning up to that point. His big break came with 33 laps to go.

Kevin Harvick took Martin Truex Jr. and Ricky Stenhouse Jr. three-wide in turns 1 and 2. Truex could not hold on, slapping off of Stenhouse and spinning right in front of the field. A pileup ensued, collecting several fast race cars. However, Haley was not one of them.

That was all the Winamac, Ind. native needed to open the floodgate. With 23 laps to go, he wheeled his green machine into the fourth position where he would stay until two laps to go. A bump from Joey Logano into William Byron‘s back bumper sent Byron into the wall, allowing Haley to sneak by and earn a strong third-place finish. It is his best finish since his rain-shortened, upset victory at Daytona International Speedway in 2019.

Haley now sits in 21st in points, 44 points off of the cut line. Not only did Haley grab his sixth finish of 15th or better in eight races, but he took out two balloons with one dart by knocking out his first top 10 and top five of the season.

Haley is not the lone underdog in catching fire as of late. Michael McDowell earned a seventh-place finish to record his third top 10 in four races. After it seemed the No. 34 team was back to being mediocre following a career-best 2021, McDowell is turning 2022 into his best season. Last week, his 17th-place finish at Dover Motor Speedway was the best of his career at the Monster Mile. Entering Darlington, McDowell’s best finish at the track was 16th. He bested that by nine positions en route to the top 10.

McDowell entered the top 10 mid-way through the final stage and never looked back. A caution after green flag stops with 39 to go set him back to 19th, but he was able to avoid the pileup with 33 laps remaining to re-enter the top 10, where he stayed for the remainder of the race. As McDowell and crew chief Blake Harris continue to gel, this will be a fun team to watch as they continue to improve.

Another team who is making use of what the doctor ordered is Stenhouse and JTG Daugherty Racing. Less than two weeks ago, we discussed how much longer the atrocious results could last. Now, Stenhouse has results of second and eighth in his last two starts. It was also Stenhouse’s best performance at the Lady in Black, where his previous career-best was 12th back in 2018. After starting outside the top 20, Stenhouse appeared to have a 12th-17th place car for the first two stages.

The Olive Branch, Miss. native entered the top five with less than 50 laps to go after a round of green flag pit stops that saw him stop sooner than others. He got his break with the caution with 39 laps remaining. As mentioned above, Stenhouse’s great run nearly reflected his luck in 2022 when Truex bounced off of him. However, the damage was minimal and Stenhouse was able to bring the car home with a stout top 10 performance. It is the first time Stenhouse has recorded consecutive top 10s since 2018. Two weeks ago, I would have been called crazy. And while there is still more convincing to do, do not sleep on the possibility of this No. 47 breaking out for a win this season.

Several other underdogs recorded notable runs. Ty Dillon‘s run was a good picture of his 2022 season: quiet, not flashy, but very solid. The No. 42 Lee Petty throwback had a top-15 car for most of the race, despite a safety violation at the end of stage two. The caution with 39 laps to go worked to his benefit as well, setting him up for a solid 12th-place finish. It was Dillon’s fourth top 15 of the season and seventh top 20 of the campaign.

It was career days for both Todd Gilliland and Cody Ware. Despite laying down a couple of Darlington stripes, the rookie was the highest finishing driver among the 2022 freshman class, earning a career-best finish of 15th. For Ware, his 19th-place result was his best showing on a non-superspeedway.

Erik Jones arguably would have been the top dog of the race had Darlington not have turned her heel on drivers in the late stages. The 2019 Southern 500 winner at the track ran inside the top 10 for a large part of the race and even cracked the top five for a sizable period. However, he smacked the wall hard in the final stage, which cost him a lot of momentum. He would be finished off in the crash with 33 laps to go, smashing his nose in and leaving him with a 25th-place DNF.

Man, just the toughest of luck there. @Erik_Jones will be done for the day 😔 pic.twitter.com/n6kfifji5N

How about something old that is something new for this column in 2022: a history lesson. Don’t worry, you don’t need a textbook or page of notes for this. After all, it is throwback weekend! Darlington is no stranger to upset wins of her own. Flash back to the 1988 TranSouth 500 with me. Entering the race, Lake Speed had made 163 starts in the NASCAR Winston Cup Series. The most laps he had led in a season was 122 in 1984. That all changed at Darlington.

Speed led 178 circuits behind the wheel of his self-owned No. 83 Oldsmobile to earn his first and only career victory at NASCAR’s premier level. It served a big part of one of Speed’s best seasons in which he earned four top fives, seven top 10s, and a career-high 368 laps led. Speed would win the race by 18.8 seconds over Alan Kulwicki.

Justin Haley (third): “This isn’t the best car we’ve brought to the race track unloading after practice. But we just kept after it all day. Some great strategy from this No. 31 LeafFilter Gutter Protection Chevy team. We had a good restart there at the end and we just kind of hung on. We didn’t have a fourth-place car, but it’s a great finish. This was my best Cup finish besides that win. To do it here at Darlington (Raceway), to get a fourth, it’s pretty special.

It was a good run. We’ll take this to next week and see what we can do at Kansas (Speedway).”

Ricky Stenhouse Jr. (12th): “It was a battle. We weren’t very good to start. I think the track conditions got a little better for us as it cooled off. But we battled all day. My No. 47 Kroger / Nature Valley Chevrolet team made good adjustments and the cautions fell the right way. I felt like we had really good strategy on that last long run, which put us in the top-five when the caution came out. I felt like we were in a really good spot to run top-five; and then the No. 4 (Kevin Harvick) got us in the fence there and I was really tight after that.

“Two top-10’s in a row is nothing to be too bummed about. That was a battle. We weren’t very good, but we made something out of it.”

Erik Jones (25th): “A tough end to our day. Our FOCUSFactor Chevrolet Camaro was a little on the tight side, but we stayed after it and I thought we had a shot at another top-10 finish. We’ll go back to the shop and refocus on next week at Kansas.”

Small Team Throwback of the Race

Chase Elliott‘s No. 9 NAPA Auto Parts throwback to Jimmy Means may have won best in show officially, but there were some underdog schemes that should brought back memories of the “good ol’ days.” For this column, honorable mentions have to go to JJ Yeley‘s throwback to Clint Bowyer’s 5-Hour Energy scheme and the Petty GMS cars with Dillon throwing back to Lee Petty and Jones throwing back to Richard Petty.

In the end, I had to go with Corey LaJoie‘s No. 7 Stacking Pennies throwback to Marty Robbins. The scheme was done in a similar manner with Tyler Reddick last year, but Spire Motorsports took it a step further. Robbins’ car featured the No. 777 on the door and roof. While drivers can only use Nos. 00-99 now, Spire found a way to make it work. Unfortunately, LaJoie hit the wall during the race and was forced to the garage, resulting in a 35th-place finish.

I also have to give some love to both the NASCAR Xfinity and Camping World Truck series for some awesome throwbacks. So without further or do, here are my favorites from both series.

If you didn't get a team photo, were you even there?
We're ready to throw it back today at @TooToughToTame! Stay tuned here for race updates and follow along as @TylerReddick drives this 48 car to the front! #NASCAR #NASCARThrowback #throwback pic.twitter.com/8yNq8ATLAp

With that, Happy Mother’s Day to all of the moms out there and for all you do!

I think to be clear Erik Jones smacked the wall due to Truex causing a major wreck. Jones has been doing really well in a majority of the races so far this season but in some cases has gotten caught up in someone else’s wreck.

You are correct about the wreck, it was also reported that he got into the wall fairly hard earlier in the stage but it did not trigger a yellow. The team has had a lot of speed but has had some rotten luck to match it.