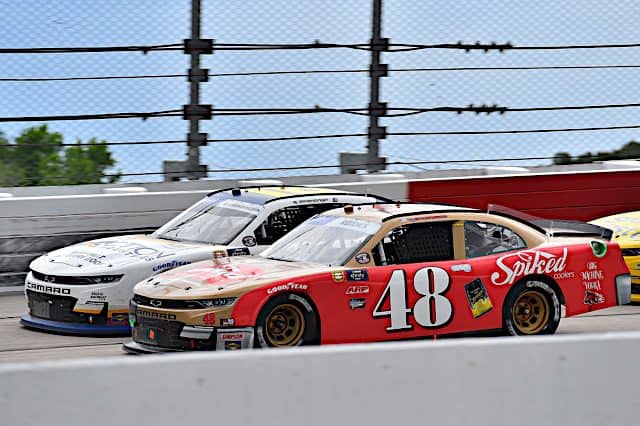 The 2022 NASCAR Xfinity Series season has not been kind to Big Machine Racing so far.

Calling the team’s sophomore season a mixed bag would be putting it kindly, because it has been a real struggle. Saturday’s (May 7) Mahindra ROXOR 200 at Darlington Raceway was the one-third mark of the current season, and the team has regressed from 2021.

One year ago, Jade Buford had made 10 of the 11 starts for the team at this point. Danny Bohn ran the season-opening race at Daytona International Speedway because Buford didn’t meet NASCAR’s requirement to race on superspeedways at that time. Bohn finished 19th before Buford took over the following week on the road course at Daytona. After the 11th race at Circuit of the Americas, the No. 48 car was averaging a 24.6 finish, scoring five top-20 finishes with only two DNFs.

Team owner Scott Borchetta elected to remove Buford from the car before race number nine at Talladega Speedway on April 23 in favor of Kaz Grala.

“We’ve made a very serious commitment to the NASCAR Xfinity Series,” Borchetta said in a press release. “Including our strategic partnership with [Richard Childress Racing], and at this time we need to evaluate all aspects of the team as I am determined to run up front.”

With Talladega being the first outing for Grala with Big Machine, it was already a lottery, and Talladega won. Grala was involved in a race-ending crash on lap 104 and finished 29th. Grala averaged a low-20s running position the following week at Dover Motor Speedway after starting 21st, crossing the finish line in 24th after falling two laps down.

Grala’s effort at Dover was the No. 48’s fourth-best finish of the season — a finish that would have been more on the average side one year ago instead of one of the better performances.

Borchetta noted that the team needed to evaluate “all aspects of the team,” because he’s determined to run up front. Last October, Big Machine announced an enhanced partnership with Richard Childress Racing, a signal that they’re not here just to play, but win.

Most of RCR’s other Xfinity-affiliated teams are running well. In-house, Austin Hill has a victory and sits 10th in points. Kaulig Racing’s AJ Allmendinger is the points leader, won at Circuit of the Americas and has scored a top 10 in all 11 races this season. His Kaulig teammates have shown top-10 speed, but bad luck keeps them 11th (Landon Cassill) and 12th (Daniel Hemric) in points. Our Motorsports drivers are 13th (Anthony Alfredo), 14th (Jeb Burton) and 16th (Brett Moffitt) in points. Brandonbilt Motorsports’ Brandon Brown and Jordan Anderson Racing’s Myatt Snider are 17th and 20th in points, respectively.

Before Buford was sidelined after eight races, he was 22nd in points, which was aided by an eighth-place and 42-point day at Circuit of the Americas. He jumped from 33rd in points to 20th after that race. Therefore, subtracting COTA means the No. 48 team have been woefully underperforming compared to other RCR-affiliated organizations.

On May 3, four days before Saturday’s Xfinity race at Darlington, Big Machine announced Tyler Reddick as the driver for that race, Texas Motor Speedway (May 21) and additional races, furthering the narrative that Borchetta wants to evaluate where his team stands. Reddick didn’t disappoint.

Battling back from damage sustained early in the race, Reddick restarted in second place with seven laps to go but suffered a tire failure and finished 26th. But before that, he was running well, convincingly driving up into the top five and finding his way back even after losing positions on pit road.

Reddick is a two-time Xfinity Series champion (2018 and 2019) and is knocking — no, pounding — on the door of his first victory in the NASCAR Cup Series. He is one of the most talented drivers in NASCAR today, yet talent can’t fix every problem a team has. Talent can’t magically find a car speed.

More importantly, Reddick has done this before. Last year, Reddick raced in seven Xfinity races — four for Our Motorsports and three for Jordan Anderson. Reddick finished second at Homestead-Miami Speedway, nearly scoring Our its first win but was later disqualified, meaning the record books say he finished 40th. His other finishes for Our were seventh (Darlington), 12th (Las Vegas Motor Speedway) and 16th (Michigan International Speedway).

If you forgo his disqualification, Reddick tied Moffitt’s second-place finish at Daytona as the team’s best finish of the season. And, looking at all the No. 23 Our performances in 2021, Reddick’s four finishes fall within the top 13 — essentially in the top third of performances.

At Jordan Anderson Racing, Reddick got the team’s season going with a fifth-place qualifying effort at COTA and a finish of eighth. The following week at Charlotte Motor Speedway, he finished fifth after qualifying 16th. A 15th-place finish at Nashville Superspeedway capped off his run with Anderson’s No. 31 team. The finishes at COTA and Charlotte were two of the No. 31’s top three performances last year, where 17 of the 23 starts for the car were finishes of 15th or worse, including 12 that were 20th or worse.

Furthermore, Darlington is one of the most challenging, if not the toughest, track in all of NASCAR. That easily gives Reddick’s performance in Saturday’s race even more credibility. Then let’s add that the entire field has been practicing and qualifying all season long, and Reddick wasn’t entered in any of the first 10 races of the season.

If Borchetta wants to evaluate his team, find out its weaknesses and zero in on the strengths, then fielding drivers like Reddick — if not just Reddick — is the only way to go. No offense intended on Grala, as he could be very helpful in evaluating road courses for the team despite Buford being known for his road course capabilities.

If it weren’t for a tire failure with six laps to go, Reddick would’ve likely finished in the top five and, at the very least, a top 10. That would have been an outstanding performance for the team that desperately needs to improve its position in the owner’s championship, let alone evaluate themselves. That is what Borchetta wants from his team.

It’ll be interesting to follow for how many races beyond Texas Reddick will be behind the wheel of the No. 48 for Big Machine Racing. Will Buford make a return? And what, if any, other drivers will the team use to evaluate their performance? Alex Bowman hinted that he has an Xfinity announcement coming soon. Could the driver of the Cup No. 48 also drive the Xfinity No. 48?

He may not be a part of the @JRMotorsports No. 88 ride, but @Alex_Bowman teased that he has his own announcement for a lower-level series ride coming soon.

Also he comments on meeting and honoring @markmartin. #NASCAR pic.twitter.com/xbHwhTfXEh

I’m putting Reddick in as many races as Richard Childress will allow if it were me. A consistent, talented presence behind the wheel is what the team needs more than anything. Big Machine Racing is capable of top-10 performances, and Reddick proved it. Now let him go out and click a few off.

I agree. Reddick is an enormous talent waiting for the breaks to fall his way. And once they do, he will blast through like an avalanche!