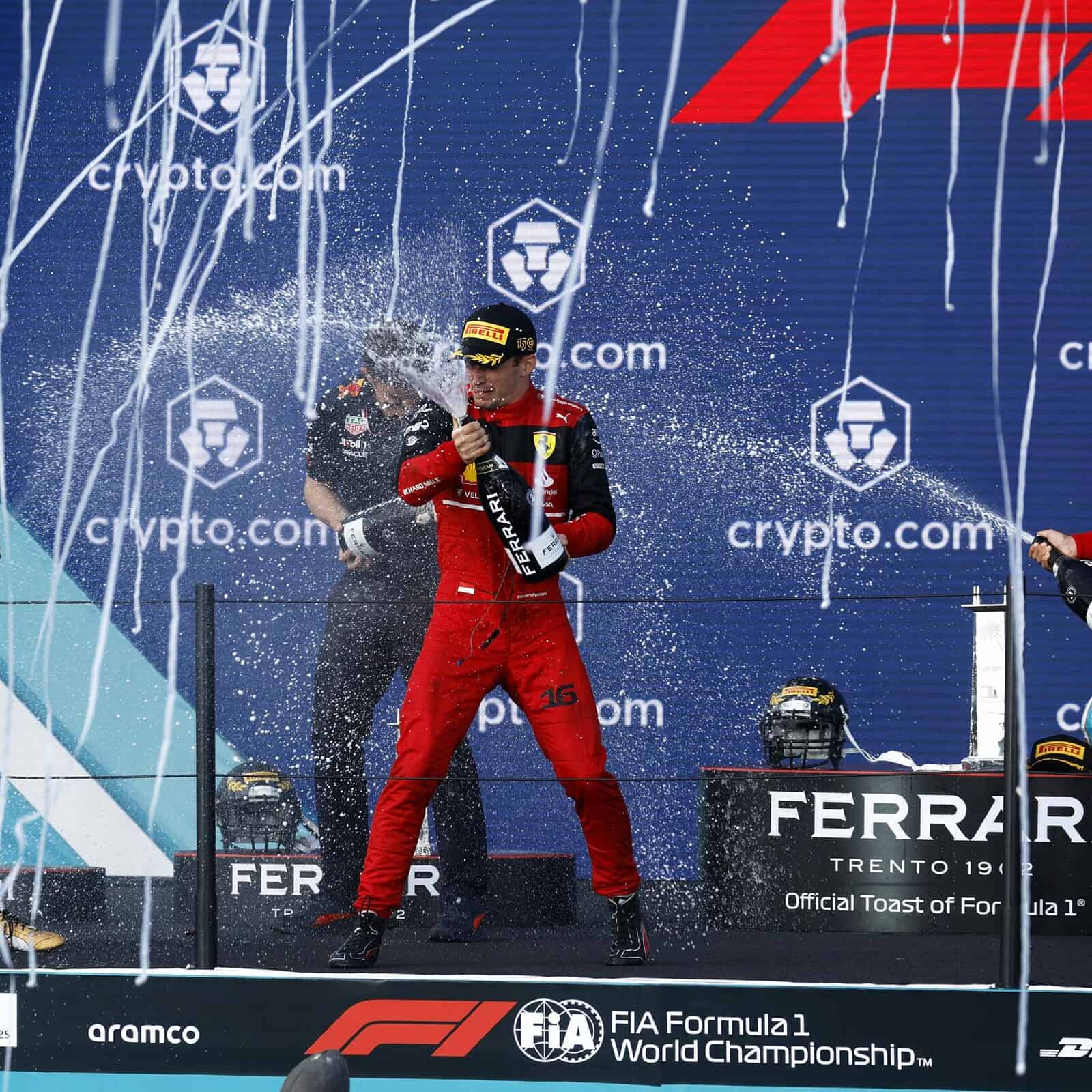 MIAMI, FLORIDA - MAY 08: Race winner Max Verstappen of the Netherlands and Oracle Red Bull Racing, Second placed Charles Leclerc of Monaco and Ferrari and Third placed Carlos Sainz of Spain and Ferrari celebrate on the podium during the F1 Grand Prix of Miami at the Miami International Autodrome on May 08, 2022 in Miami, Florida. (Photo by Chris Graythen/Getty Images) // Getty Images / Red Bull Content Pool // SI202205090009 // Usage for editorial use only //

With five rounds down and 18 rounds to go, the 2022 Formula One World Championship looks set to be Ferrari’s Charles Leclerc and Red Bull’s Max Verstappen faceoff for the title.

Leclerc leads the title race with 104 points to Verstappen’s 85, while Verstappen holds three race wins to Leclerc’s two. Sergio Perez and Carlos Sainz sit third and fifth in the standings, with George Russell and Lewis Hamilton parked in fourth and sixth in a Mercedes that has proven unexpectedly cumbersome.

Meanwhile, in the corporate meeting rooms of Liberty Media, we can safely assume there’s a jovial atmosphere.

One of the key tenets of Liberty Media’s strategy for expanding F1 in a more international direction has been the aim of capturing the large, but historically elusive market that is the United States. After Miami, we have to wonder whether it’s a matter of if or when.

With ESPN citing a viewership of 2.58 million, the 2022 Miami Grand Prix became the second most viewed F1 race in the United States, second only to a delayed airing of the 2002 Monaco Grand Prix.

While NASCAR barely (2.61 million) topped F1 in terms of American viewership last Sunday, the key demographic — adults aged 18 to 49 — sat on the open-wheeled side of the fence.

For 2023, the Formula One calendar will include three races in the United States. Miami and the Circuit of the Americas will be joined in the rotation by the freshly announced Las Vegas Grand Prix, set to be held on a temporary street circuit in November. Much has been made of the image and atmosphere that F1 aims to present and cultivate with the race weekend structure and experience, and with the addition of the Las Vegas Grand Prix, that goal may well have reached its peak.

NASCAR, on the other hand, may not be experiencing an irredeemable fall from grace; the direction of the sport is far from clear.

In particular, the broadcast put on by FOX Sports over the past few seasons has been widely panned as increasingly shallow, gimmicky and uninformative, if not downright sloppy. Commercials can be seen airing closer and closer to the checkered flag, and the broadcast can take up to three tries before finding a camera angle that captures the entirety — or even just the bulk — of any given on-track incident.

We don’t need to reopen the stage racing can of worms or the more short tracks vs. more road courses debate to get to the conclusion that, be it genuine or for show, F1 appears strategically coherent and united in comparison to NASCAR. And (relatively) early insight suggests the American market is happy to see it.

While the action in Miami was business as usual at the front for the most part, not all of that business was positive.

Reliability concerns dampened Perez’s podium chances when a sensor malfunction led to a partial shutdown of his car’s power system. While Red Bull engineers were able to keep Perez’s car running, the issue ultimately stole approximately 20 kilowatts of power from the No. 11 car.

At day’s end, Perez closely followed Sainz across the line to finish in fourth place — a worthy effort from the Mexican. However, this marks the fourth major reliability issue for Red Bull in five races. All of them have dealt with the power unit in some capacity.

Honda, who provided engines for both Red Bull and AlphaTauri, opted to step away from Formula One at the conclusion of the 2021 season, when Verstappen took Honda’s first drivers’ championship since Ayrton Senna for McLaren-Honda in 1991.

Currently, the Red Bull team is using power units developed by Honda (though without Honda branding due to an intellectual property agreement), before taking full responsibility for their own power in 2023 in the form of Red Bull Powertrains. For all intents and purposes, nothing major has changed in the Red Bull engine department other than the signage.

However, four problems and three retirements in five races sits a bit beyond the threshold of pure coincidence. The consistency of Ferrari, and Leclerc in particular, demands that Red Bull stay on their toes regarding reliability if their title hopes are to survive.

One thing I will mention about those viewing figures. NASCAR was on FS1 not the main FOX station, while in the US, F1 aired on ABC. I would think those figures would be reversed if the Darlington race aired on FOX instead of cable.