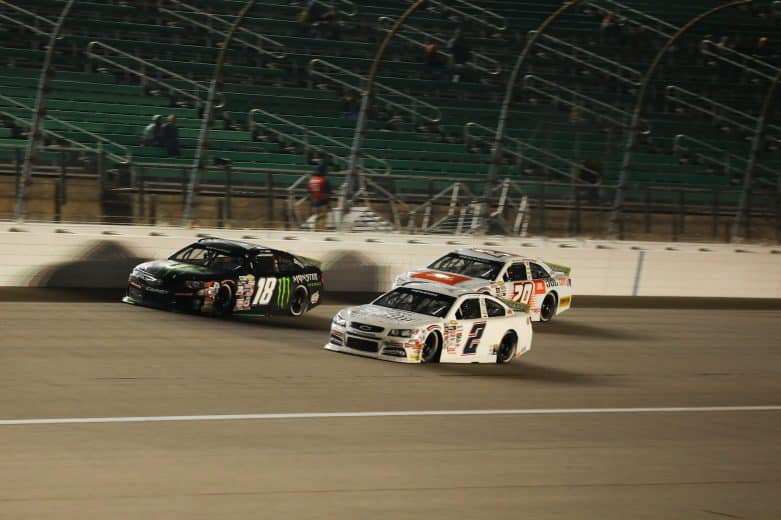 Kansas Speedway is the only track that will host the ARCA Menards Series twice this season as 20 drivers will compete in the Dutch Boy 150 on Saturday (May 14).

The Dutch Boy 150 will be an early test for ARCA’s top championship contenders who should enter this race evenly matched. All sans Amber Balcaen have experience at this 1.5-mile track and feel strongly they can win. Factor in Corey Heim, who captured the 2020 season finale there, and this 100-lap race should be the antithesis of last year’s iteration when Ty Gibbs led every lap en route to victory.

Among those expected to contend? The top-two drivers in the ARCA standings, Rev Racing teammates Rajah Caruth and Nick Sanchez. Caruth leads Sanchez by four points in the battle for the season championship.

Caruth has competed at Kansas before, finishing ninth, one lap down, in the 2021 ARCA season finale.

“For Kansas, it is hard to base it on last year’s finishing result just cause so many things are out of my control,” Caruth told Frontstretch. “As long as I do what I am supposed to do on the racetrack, and do my preparation, then everything should go well in the race. I do not expect anything worse than a top three.”

“It is our first 1.5-mile track of the year and that kind of sets the tone for the bigger, more higher-profile races,” Bucher told Frontstretch. “Nick raced there twice last year, and Rajah raced there at the end of the year.

“We knew Rajah was going to step up to run full-time with us this year, so we brought him along to Kansas last year. I do not think his finishing performance, as far as the number, was indicative of where he ran. I felt like he was a top-five car there last year as well. We are excited to get going; the two plate races are wild cards so to get them out of the way so we can go race at places where we have a little bit more control over the outcome [is good for us].”

Indeed, after several early off weeks and two pack races influenced by Lady Luck, ARCA’s full-time teams are eager to transition into the meat of the schedule.

“Once we get into Kansas, we are pretty locked in until we get to the end of the season in October,” Bucher continued. “Once we get going here, it will be a grind to the end of the year. We have been getting our cars prepped and our backup cars ready to prepare for where we will be going. We have a pretty good jump on things. We know our competition is not sitting around waiting for everyone else to get better, so we have been working to continue bringing better pieces to the track as well.”

Although Caruth is the points leader, Sanchez is the hottest driver entering the Kansas race. In addition to winning the most recent ARCA race at Talladega Superspeedway, Sanchez earned his first career ARCA victory at Kansas in the 2021 season finale.

“Obviously, I want to win every race,” Sanchez told Frontstretch. “No matter what track we’re on, I treat every track the same with the same preparation. Obviously, Rev Racing excels at 1.5-mile tracks, so that’s good.”

If Sanchez wins, he will become the third driver to win multiple ARCA races at Kansas, following Frank Kimmel and Alex Bowman.

“Going into Kansas and Charlotte [Motor Speedway] are huge cause I feel like the next two races are our tracks,” Sanchez told Racing News Now. “I expect me and my team to go win. I think Kansas will be our first race with Chevy enhancing our performance, actually touching up my car. I’m really excited to get over there, see everything they’ve done to it and put it on track.”

Meanwhile, Daniel Dye is second in the points, but he is indefinitely suspended from ARCA competition. A GMS Racing spokesperson confirmed to Frontstretch that Dye is still with the team and they will field his No. 43 Chevrolet in Saturday’s race. As of press time, an interim driver has not been announced. It is worth noting both GMS’ NASCAR Camping World Truck Series drivers Grant Enfinger and Jack Wood have ARCA experience.

Another team to watch is Kyle Busch Motorsports, where driver Drew Dollar is set for his penultimate ARCA start of this season. Dollar has two top fives and five top 10s in five career ARCA starts at Kansas.

“You are always learning and improving at Kansas,” Dollar told Frontstretch. “Kansas has been a track where I’ve immediately had a lot of speed, and I have always liked how we have run there… I am constantly improving there. Now, with Kyle Busch Motorsports, it is a different program for me. I am excited to use my experience to keep running great.

“I know we will be good there. It is a top-tier program in ARCA. I will hope to seal the deal there, for sure.”

Kimmel Racing will also find itself with a unique opportunity to be competitive. After Scott Melton suffered a nasty injury due to a crash at Talladega, Melton graciously allowed Will Kimmel to drive the No. 69 Toyota, a car owned by Melton.

“I’m extremely grateful, at this point, because in my ARCA career no one has given me an opportunity to get in this type of equipment and say just treat it like your own,” Kimmel told ARCA Racing. “Go race the car and don’t worry about it. That’s exactly what Scott’s done… for him to say just go run the car and race it, it’s super cool. At the same time, the situation sucks, but he wants to race and he wants to see his car on the racetrack. I’m going to go do my absolute best and hopefully have a good run with it.”

Kimmel has two top 10s in six ARCA starts at Kansas, and he is looking forward to the Dutch Boy 150.

The ARCA race at Kansas Speedway will take place on Saturday, May 14 at 2 p.m. ET with TV coverage provided by FOX Sports 1.