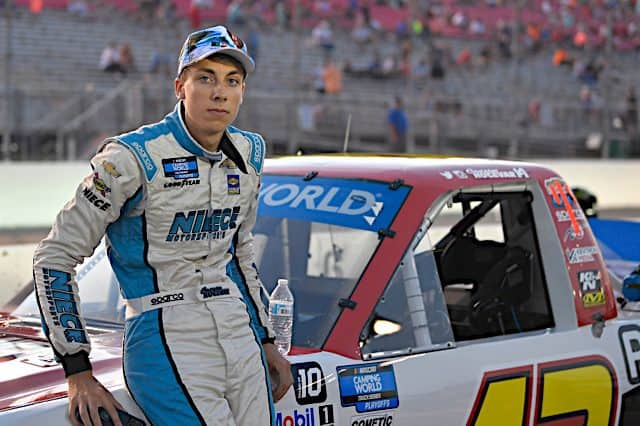 One of the biggest debates in the NASCAR Cup Series with the debut of the Next Gen car is if there will be more than 16 winners during the 2022 regular season. But could we have the same debate about the Camping World Truck Series playoffs, where only 10 NASCAR Truck winners are needed to create chaos?

Let’s break down the possibility.

The 10-driver field already has four different winners: Zane Smith (Daytona, COTA), Ben Rhodes (Bristol Dirt), Chandler Smith (Las Vegas), and John Hunter Nemechek (Darlington).  However, Zane Smith is the only multi-time winner this season, and with nine races left until the Truck Series playoffs, there are still a lot of drivers in contention to reach victory lane.

The hottest winless driver right now is Carson Hocevar, who has finished second in the last two races the series has run. His bigger heartbreak came at the Bristol Dirt Race, where he was passed for the win by Rhodes with five laps to go.  This teenager’s first win is coming, and the sooner it gets done, the less pressure there is for him over the summer stretch. Hocevar’s Niece Motorsports No. 42 has speed; he just needs to seal the deal.

One racetrack that Hocevar might want some revenge at is Knoxville Raceway.  The 2021 race at Knoxville was arguably the first time we saw his talent on full display, leading 17 laps and becoming a threat to win until getting turned on the last lap by Nemechek while running inside the top five.  As strong as he was on the dirt at Bristol, Knoxville may be the place where Hocevar finally gets it done.

Speaking of Knoxville, Stewart Friesen and Matt Crafton have not been contenders so far this season and could be surprise winners there as well. Friesen is a proven winner on dirt, both in the Truck Series and other divisions.  Knoxville might be one of Friesen’s best chances at winning this season.  He currently sits fourth in the point standings, so he has had consistency and speed, even with Halmar Friesen Racing adding a second part-time truck for Todd Bodine and Jessica Friesen.

Crafton has won on dirt before (Eldora Speedway, 2017), and is looking to snap a winless drought dating back to Kansas in 2020.  The three-time champion has struggled so far this season, mainly due to issues not of his own doing. His experience in the series alone makes him capable of winning not just at Knoxville but at any one of these nine upcoming races.

Among the tracks laying ahead before the playoffs include Nashville Superspeedway, an oval where Grant Enfinger finished second to Ryan Preece after a thrilling battle in the closing laps. Enfinger just finished a season-best third at Darlington, his fourth straight top-10 finish of the season that bumped him up to ninth in points.  He’s quietly found his footing with GMS Racing and is looking to only improve as Nashville inches closer.

Another driver who has Nashville circled on the calendar is Derek Kraus.  Kraus won the pole for last year’s race and led all laps in stage one en route to the win, but a crash late in the race wiped out any hopes of ending the night in front.  Kraus and the entire Hilgemann-McAnally Racing team have struggled this season (which might be due to adding their second truck team for Colby Howard). However, last year they began to shine once the midpoint of the season hit (i.e.: Nashville) so Kraus might capitalize as spring turns into summer.

Other quiet contenders for wins that we might see throughout the next few months include two ThorSport Racing teammates, Christian Eckes and Ty Majeski.  They are running seventh and eighth in points, respectively, and have each had flashes of running toward the front throughout the season.  With a little bit of strategy, one or both of these guys might join Rhodes as a winner at ThorSport this season.

Are you counting with me at home? Adding Hocevar, Enfinger, Friesen, Crafton, Kraus, Eckes and Majeski would leave the Truck Series with 11 winners by the regular season finale.

There will be some drivers who aren’t running full-time throughout the season, however, who will be looking to upset the apple cart. Parker Kligerman has run extremely well in his Henderson Motorsports No. 75 and is currently sitting 14th in points despite missing two events.  Though he is not postseason eligible, Kligerman still might steal a win under the nose of other playoff contenders.  And then there’s Preece, continuing his outstanding performance with the No. 17 Ford fielded by David Gilliland Racing. He will be running with them at Nashville once again, so look for Preece to defend his win there.

Finally, of course, we cannot forget the NASCAR Cup and Xfinity series regulars who will surely win some races this season. Kyle Busch still has two starts remaining while Spire Motorsports’ truck team has filled their seat with all upper-level drivers, including Austin Hill, William Byron, Chase Elliott and Alex Bowman. All of them have run impressively well, with Byron even winning at Martinsville Speedway last month.

Finally, don’t forget about ARCA drivers such as Corey Heim who might shock the field. He’s already done it once this season, pulling off the upset at Atlanta Motor Speedway.

So, will there be more than 10 winners this season?  It’s more possible than you might think at first glance. There are still a lot of drivers without a win that we would expect to reach victory lane, driving equipment that could easily get them there.

That said, there are several moving factors (as in, 30-something other drivers on race day) that will make it very difficult. But one of these years, it’s going to happen, right? Why not in 2022?