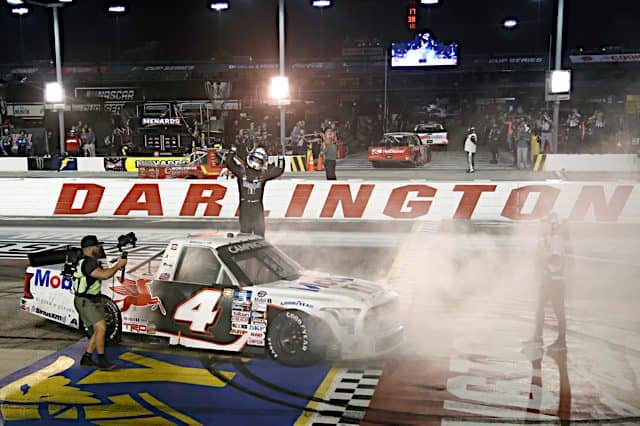 Was Joey Logano justified in his bump of William Byron to win at Darlington Raceway in the NASCAR Cup Series?

Last weekend, Joey Logano moved then-race leader William Byron out of the groove and into the wall with two laps to go for his 28th career win and his first at Darlington. During his post-race interview, Logano was unapologetic for his actions and said that Byron had squeezed him into the wall on the final restart with 26 laps to go.

In this instance, Logano was too aggressive for his own good. The contact between the two on the restart wasn’t intentional, it was two drivers racing hard for the same real estate. And on the chaotic double-file restarts, it is impossible for cars to not make contact with each other once in a while.

Had Logano decided to bump-and-run his way to the front, it would be a different story. Bump-and-runs have been accepted in NASCAR, and there is an art of subtlety to them.

But Logano’s move wasn’t a bump-and-run — it was a dump-and-run. He pushed Byron hard enough to where it sent the No. 24 car straight into the wall. In this instance, the punishment didn’t fit the crime.

At the moment, Logano is all smiles now that his 40-race winless streak has been eradicated. But Byron was understandably upset about the contact, and Logano will now have to deal with whatever retaliation comes next.

After a beer can was thrown at John Hunter Nemechek during his frontstretch interview at Darlington in the NASCAR Camping World Truck Series, is it time to return to traditional victory lane interviews?

John Hunter Nemechek had a full beer can thrown at him by a fan on the fronstretch during his post-race interview at Darlington. While the can missed and the fan was later identified, the incident brings further questions to the interviews at the start-finish line that have become commonplace since the end of the 2016 season.

Last October, fans at Talladega Superspeedway engaged in a political chant that was captured live on-air during Brandon Brown’s interview for his first NASCAR Xfinity Series win. The fallout from the controversy created a new political slogan and brought negative, unwanted attention to NASCAR, its fans, its drivers and its television partners.

With two controversial moments in the past seven months, it’s time to return to the traditional victory lane interviews for the winners. It would be one thing if the start-finish line interviews were a smashing success, but these interviews have generally been unpopular among fans since their inception.

A projectile getting thrown from the stands also creates a host of liabilities. While no one was hit or injured during Nemechek’s interview, it is theoretically possible for fans to throw projectiles that strike the drivers or reporters. And in that event, the question would turn to why the victory lane interviews weren’t changed with ample red flags already provided.

That said, the TV networks have been adamant on the keeping the status quo with the interviews, and the beer can throw hasn’t garnered enough media attention to spark a change. Nonetheless, fans need to enjoy the experience, bask in the moment and be respectful of the winner while allowing them to freely celebrate in their post-race interview.

Will anyone win their way into the All-Star Race in the last shot this weekend at Kansas Speedway?

The 2022 All-Star Race looks likely to have the largest field since 2008. 2021 and 2022 have seen 19 different drivers take a checkered flag, and two-time All-Star Race winner Kevin Harvick gives 20 drivers guaranteed spots in the main show. Three drivers will win stages in the All-Star Open, and a fourth will get into the All-Star Race via fan vote.

With this weekend’s Cup race at Kansas Speedway, non-eligible drivers have one more chance to bypass the Open entirely. But unless there is a dramatic turn of events in the final laps this Sunday, there is only one driver with a realistic chance of winning their way into the All-Star Race: Tyler Reddick.

Some of Reddick’s best performances in the Cup Series have come on 1.5-mile tracks. In 2021, he had seven races with an average running position better than 10th. Of the seven, four of them were at 1.5-mile tracks. Reddick also flirted with a win at Las Vegas Motor Speedway last September, as he was running second and keeping pace with leader Denny Hamlin in the final stage until a slow pit stop relegated him to a sixth-place finish. And of course, Reddick’s prowess at Homestead-Miami Speedway needs no introduction.

Reddick also dominated at Auto Club Speedway this February until a flat tire and crash with Byron on lap 152 ended his winning bid. With the 2-mile Auto Club driving similar to the 1.5-mile intermediate tracks, it’s clear that Reddick has them figured out in the Cup Series.

With that said, Reddick has also had problems with consistency in 2022. He has four top five finishes in the first 12 races, but he also has five finishes of 28th or worse. But the flashes of speed are there, and if anyone from the All-Star Open has a chance at putting together the perfect race this weekend, Reddick is that guy.

With Justin Allgaier’s Xfinity win at Darlington, three of the four full-time JR Motorsports drivers have won in 2022, with the exception of Sam Mayer. How long before he picks up his first?

Sam Mayer has been the odd one out in JRM’s dominance this season, but that is no reason for concern. Mayer is still just 18 years old, and he has already shown tremendous improvement in less than a full season of racing in the Xfinity Series.

Last year, Mayer had just one top five in 18 starts. He already has five top-five finishes in 11 starts in 2022, and all of them have come in the last six races. He’s also shown great success in overcoming mid-race adversity, as he came from the back of the pack to finish in the top five at Circuit of the Americas and Dover this year as well as at Martinsville Speedway last year.

Mayer has also spent a fair amount of time out front this year, as he led sizeable chunks of the races at Vegas and Dover.

With his current improvements in performance, it seems reasonable to predict that Mayer will collect his first Xfinity win before the season ends at Phoenix Raceway in November. And if he continues to improve with more races under his belt, that first win will come before the playoffs.

Never liked the “new” format for the winners interviews. Why was it moved from victory lane? What is the point of then going to victory lane? You celebrate once for real, and then the next is just an act?

I say “If they drive dirty, let them get dirty”. If I would have been there at Talladega when Jr lost to Jeffy G i would have thrown a can or 3 at him also. As for LGB I think is wasn’t a bad thing at all

I think the networks like it because if the race runs long they can interview the winner right away and don’t have to wait for them to get to VL, That allows them to move onto the next program quicker. Another cost of starting the race after 3PM.

You know what change they should make? NASCAR should have a truck and trailer, and on that trailer is a boxing ring that can be pulled out onto the front stretch after the race. A referee will be provided. Any driver angry after the race can call out the driver(s) they are dis-satisfied with, glove up, and settle it in the ring for all the fans to see! If a driver is called out and refuses to enter the ring, they are disqualified from that race (results as DNQ), lose an additional 100 points, are fined $100,000, and have to drive the #7 “Chicken Pit Special” (plucked paint scheme) while wearing a chicken costume for the next 3 races.

Further, if any driver is angry and decides to ram another driver on the cool down lap, start drama in the pits, or any other physical or verbal action against a driver they are angry at WITHOUT calling them into the ring, then THEY receive the penalties outlined above.

Nice.
Hey the rules and governing body already make NASCAR borderline WWE most weeks, might as well sink the rest of the way.

i though the front stretch interviews were what nascar implemented during the world of covid 19 restrictions. limited access to people to keep the potential for spread down. the only “frontstretch” interview i can remember as being the norm was indy 500.