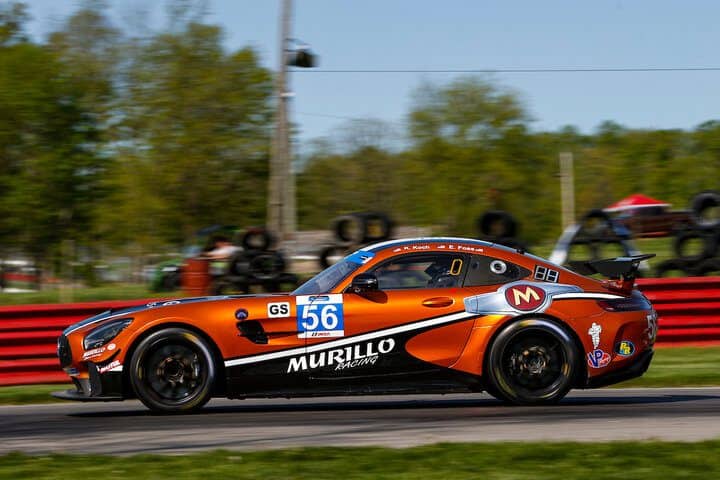 In the morning session, times were rather slow early on.  Both of Turner Motorsport’s BMWs were on top of the chart during the session, as was McCann Racing’s Andrew Davis.  However, BGB Motorsports’ Spencer Pumpelly set a lap at 92.684 mph in his Porsche to lead the chart.

Pumpelly’s lap was nearly a third of a second faster than Koch. VOLT Racing’s Trent Hindman was third, then Christian Szymczak in the second Murillo Mercedes.  KohR Motorsports’ Billy Johnson was fifth in his Ford Mustang GT4.

Stephen Cameron Racing’s Greg Liefooghe was sixth in his BMW, then CarBahn Motorsports with Peregrine Racing’s Tyler McQuarrie.  Riley Motorsports’ Scott Andrews was eighth, followed by Rennsport One’s Alexandre Premat, who was a late entry for the weekend.  PF Racing’s Kyle Marcelli was 10th in his Mustang.

In TCR, JDC-Miller MotorSports’ Chris Miller was fastest in TCR with a lap at 90.972 mph, good for 22nd overall.  Miller’s lap was one-sixth of a second faster than Bryan Herta Autosport/Michael Johnson Racing’s Stephen Simpson in his Hyundai Elantra N TCR.  Ryan Norman was third fastest in his Hyundai, then the Audi of Road Shagger Racing’s Jon Morley.  LA Honda World Racing’s Tiago Monteiro was fifth fastest.  The only team that failed to set a time in the session was the HART Honda Civic Type-R TCR shared by Steve Eich and Chad Gilsinger.

In the afternoon session, the speeds continued to increase.  While drivers such as Premat, Hindman and Turner Motorsport’s Robby Foley were quickest early, Koch set the quick time of the day 24 minutes into the 60-minute session.  The lap is actually one-eighth of a second faster than the current Michelin Pilot Challenge track record for Mid-Ohio.

Koch’s lap was more than two-thirds of a second faster than the Porsche of TeamTGM’s Owen Trinkler.  Premat was third quickest, then Kenny Murillo in the No. 72 Mercedes for Murillo Racing.  Turner Motorsport’s Dillon Machavern was fifth in his BMW.

Foley was sixth fastest, with Riley Motorsports’ Andy Jakos and VOLT Racing’s Alan Brynjolfsson close behind.  Andrews and Johnson rounded out the top 10.

In TCR, Bryan Herta Autosport’s Gabby Chaves, in for the weekend in place of Mark Wilkins, was fastest in class with a lap at 91.183 mph, 23rd overall.  Chaves ended up eight-hundredths of a second faster than Miller.  The Audi of Belgard & Techniseal Racing’s Denis Dupont was third, then LA Honda World Racing’s Mat Pombo.  The Hyundai Veloster N TCR of Van der Steur Racing’s Tyler Gonzalez was fifth.