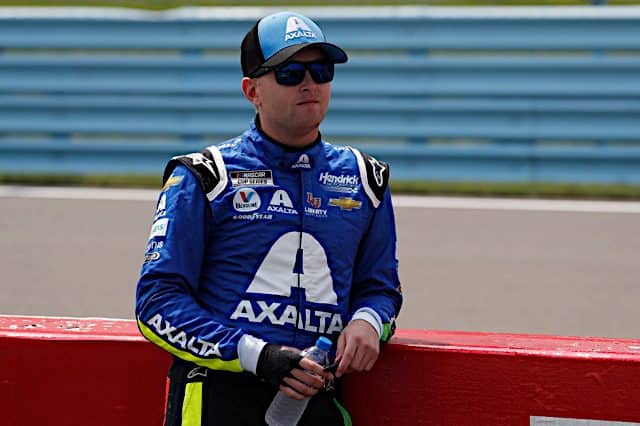 We haven’t seen much emotion from William Byron when he gets wronged on track … until Joey Logano did Joey Logano things at Darlington. How do you think the finish will affect him moving forward? – Chuck P., Charleston, S.C.

Not that it makes William Byron feel any better now, nor did it in the days following Darlington Raceway, but I believe in 5-10 years time, both he and Hendrick Motorsports will look back at this finish, Joey Logano‘s move in the closing laps and Byron’s reaction post-race and it may mark a turning point in his development.

Although he’s been in the NASCAR Cup Series for a handful of years, he’s barely even started by industry standards. While most start racing in their elementary school years, Byron did so competitively much later (and on a computer … hello, Rick Allen) before transitioning into legends cars, late models, the NASCAR Camping World Truck Series, the NASCAR Xfinity Series and eventually the NASCAR Cup Series.

He’s an extremely mild-mannered, calculated and calm driver. He’s pretty good too, as he sits tied with Ross Chastain for the most victories in the Cup Series this season. But this was really the first time he showed genuine anger, frustration and — gasp — profanity post-race.

That fire is good. I doubt anybody questioned Byron’s desire to win at all costs and ability to turn it on in crunch time, but this proves that the fire is undoubtedly there. Running up front for wins with regularity means running around drivers that you haven’t necessarily competed against with regularity. That takes some getting used to.

Even though everybody and their mother knows Logano is one of (if not the) most aggressive drivers in the series, Byron was still miffed at the move. But as Jeff Gordon told him immediately after climbing out of the car, Byron owes Logano one now.

This really is the first time Byron was legitimately pissed. He’s been a clean and nice racer to this point, but we know if someone wants to take that next step they’ll have to ruffle some feathers along the way. We’ll see when he chooses to invoke payback, and how that occurs. But when Byron has multiple race wins and perhaps even a championship to his resume down the road, Darlington will mark a turning point of when, personally and mentally, Byron went from good to great.

Not at the moment, but down the road, it’s entirely possible F1 becomes even more of a threat to motorsports viewers in the United States.

However, the majority of NASCAR fans and F1 fans are inherently different. This past week, NASCAR narrowly won in viewership, but it was much closer than originally anticipated and the rapid growth of F1 in the U.S. is evident by said ratings.

With a third event in the U.S. set to debut next year in Las Vegas that’s sure to rival the pomp, circumstance, sizzle and sex appeal of Miami this past weekend, the interest will continue to reach the peak at Thanksgiving 2023.

As is customary with the U.S. sports landscape, longevity is king. Newer leagues and sports rarely have sustained success, and many fail to have staying power. But F1 isn’t an American sport. It’s one of the largest international sanctioning bodies and just like most associate the word racing with NASCAR in the states, most worldwide do that with F1.

The Drive to Survive effect cannot be ignored, either. Liberty Media’s gamble to go big on marketing and distribution of its product has paid off big already, not even a decade into their ownership of F1. It shouldn’t come as a shock that an American company is heavily investing in American media to help get its product, which is already internationally a known commodity.

The biggest sports market is in Liberty’s backyard. and they’re finally starting to tap into it. While NASCAR is king and likely will remain in that spot for the foreseeable future, failure to continue innovation while F1 leads in that category could prove costly.

Byron will be just fine. The hype will go away. However, he will lose, long term, if he tries to battle Joey L. I am not a fan of Hendrick but can appreciate the talent they have assembled. Hendrick sells cars to all fans. Long term, a battle does not look good.
I think Byron will be the standard-bearer at Hendrick. Maybe not the most popular, or a king of dirt, but his overall upside is unlimited.