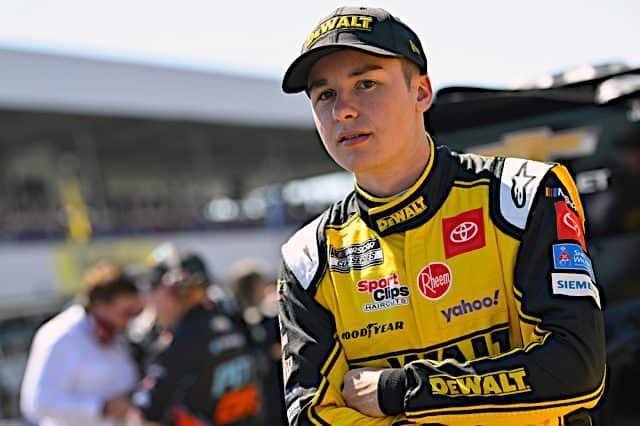 Christopher Bell grabbed the pole for Sunday’s (May 15) NASCAR Cup Series race at Kansas Motor Speedway after logging a quick lap of 179.575 mph in the second round of qualifying.

It’s the Joe Gibbs Racing driver’s third pole of the season, tying Ryan Blaney for most poles in 2022. Bell seemed to gain an edge by mastering the outside line on Kansas’ 1.5-mile tri-oval, particularly in turns 3 and 4.

“The top is super fast, especially on long runs,” Bell explained to MRN following his qualifying effort. “But (turns) 1 and 2 are just really rough on the top. With these cars and what we found out through the early parts of the year, they don’t really like the bumps. So just trying to avoid the bumps and then run as high as I can in (turns) 3 and 4 ‘cause the track’s smooth.”

Bell remains the only Toyota driver to win a pole this season.

“Qualifying’s been really strong for us,” he added. “Just really proud of this group on this No. 20 car, they’ve been bringing excellent Camrys to the racetrack week in and week out. We’re getting some results but we want to win, and maybe tomorrow’s it.”

Tyler Reddick will start alongside Bell on the front row, while Kyle Larson and Austin Cindric make up the second row. Kurt Busch rounds out the top five after posting the fastest lap in practice.

Several drivers had left-rear tire issues during practice, including Chris Buescher, Joey Logano and Ricky Stenhouse Jr. All three suffered damage after getting into the wall. Since they went to the garage, they didn’t make a qualifying lap and will start at the back. Buescher will have to use a backup car for the race.